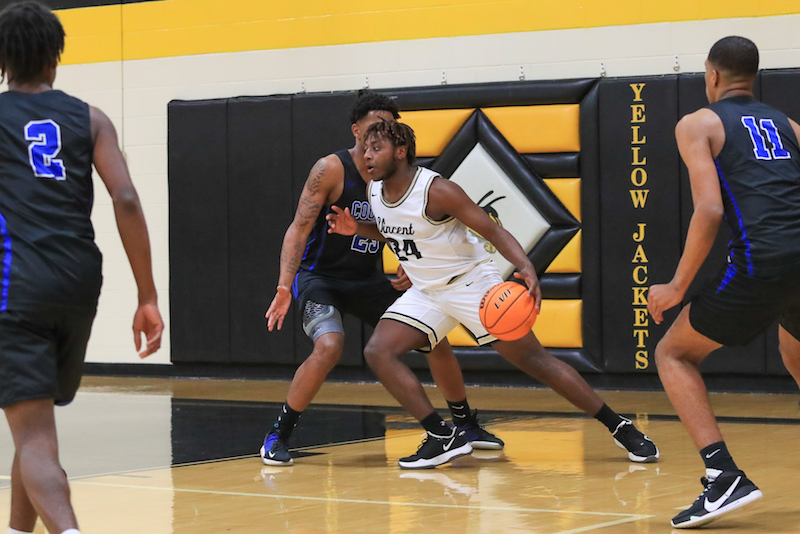 VINCENT – The Vincent Yellow Jackets overcame some early jitters in their season opener on Friday, Nov. 12 in a home matchup against Childersburg.

Early in the game, it looked as if the Jackets were going to be off and running after breaking a 6-6 tie with a 9-2 run that put them up 15-8 late in the first quarter.

Childersburg, however, responded with a 5-0 run to end the first period and cut the deficit to two points going to the second quarter.

That strong finish to the opening quarter for the Tigers carried over, as it became part of a 15-3 run to storm in front for a 23-18 lead.

Childersburg maintained its lead throughout the second quarter, eventually leading by as many as eight on two different occasions before taking a 34-27 lead into the half.

Out of the half, however, Vincent flipped a switch on the defensive end.

The presence of the Yellow Jackets helped force the Tigers to go from shooting 56 percent from the field in the second quarter to shooting just 30.8 percent in the third quarter.

Childersburg only hit four total baskets in the period and went 1-6 from the free throw line.

The Jackets fell behind by eight again early in the half at 39-31, but they battled back the rest of the quarter.

An 8-0 run quickly evened the score before the Tigers jumped back up by five at 44-39, but the Jackets clawed back to within one at the end of the third quarter.

Then, Vincent hit a deep shot from beyond the arc for the first basket of the final quarter to regain the lead, and the Jackets didn’t relinquish it the rest of the way.

Their offense went on to have its best quarter of the game in the final quarter, scoring 25 points in the period.

The Yellow Jackets outscored Childersburg 41-29 in the second half to pull off the five-point victory.

A big reason for the success was the play of Ty’Qun Goodman who finished with a double-double on the back of 23 points and 11 rebounds. He also added four assists to lead the Jackets in all three categories.

Beyond that, Blake Allums played a nice role with 19 points and five rebounds, while he led the team with three steals.

Tray Youngblood added nine points, five rebounds and three assists for the Yellow Jackets to help the Jackets get off to a 1-0 start to the season.