Helena honors Jackson Knox as Volunteer of the Year 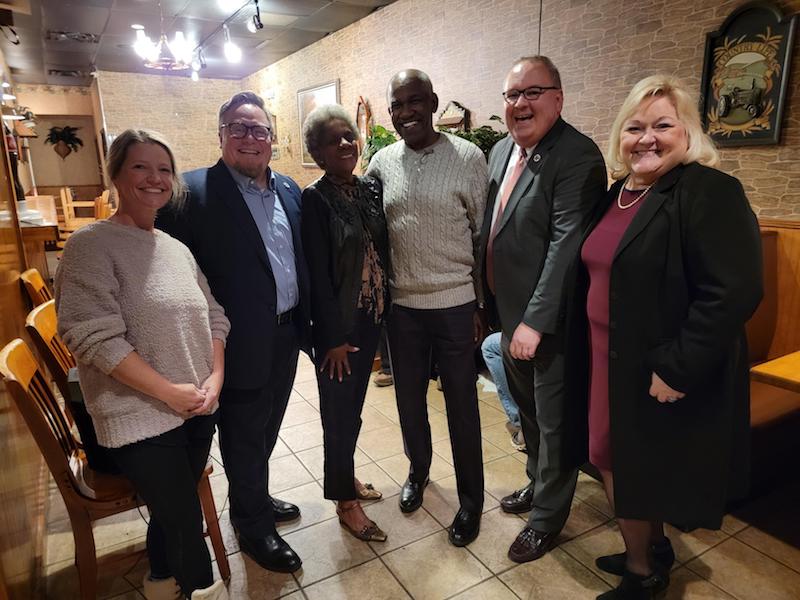 Jackson Knox, Jr. was this year’s recipient of the Helena Volunteer of the Year Award. Knox was awarded a special coin with his image engraved on the back. Pictured is Knox with Leigh Hulsey, Hewy Woodman, Knox’s wife Sandra, Chris VanCleave and Alice Lobell. (Contributed)

HELENA – The strength of a community is measured by its residents, and Helena has always been full of residents who are willing to go above and beyond to represent the best of the best, including volunteer work.

Every year the volunteers who devote their time to making the city of Helena a better, more evolved place to live are honored at a “Thank You Volunteers” party where they’re presented with a commemorative volunteer coin.

This year, the Volunteer of the Year award was presented to Helena’s Jackson Knox. Knox moved to Helena in 1987, and ever since he has donated his time to helping build the city of Helena into what it is now. What’s even more impressive, is he has put in his hard work with no expectations of recognition or thanks; Knox simply wanted to make his town a better place for everyone.

Councilmember Hewy Woodman stood at the front of the room and listed off the various contributions Knox has made to the community.

“He volunteered as one of the original members of the Civitan Club shortly and served as Vice President and President,” Woodman said. “His efforts raised scholarships for Helena students, funds for summer band camps, donations to Children’s Hospital and The Jimmy Hale Mission. He sold bricks for the Jane Holmes Library, built the large pavilion at Joe Tucker Park, provided food and veterinary services for Helena’s first police drug dog.”

Knox also served in the Kiwanis Club of Helena, and was instrumental in finishing Helena’s Boundless Playground.

“He served as chair for the pancakes fundraiser which supported Helena Elementary and the new High School band, and [he] volunteered at the playground at the Buck Creek festival,” Woodman continued. “On top of this, he has also had time to serve on the Planning and Zoning Board and as a Poll Worker. In total, this amazing man has given 34 years of service to Helena.”

Knox was presented with the special volunteer coin with his image engraved on the back.

“I was deeply honored and humbled by this award,” Knox said. “Like those preceding me, I volunteered without any expectation of acknowledgment.”

Woodman expressed his gratitude to the other volunteers present, calling them “among some of the kindest and most generous people in Helena.”

“People from all over the earth have a varying amount of worldly wealth, but essentially we all are given the same portion of time to exist here,” Woodman said. “You have chosen to give some of your limited time, freely, without compensation, to make the world better, which I feel is the greatest gift you could have given.”