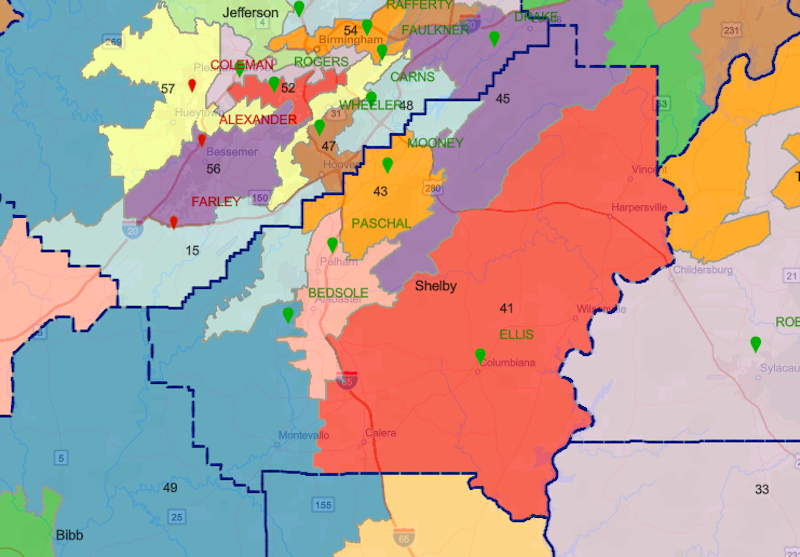 Redistricting was recently completed with new maps drawn for the state, setting new representatives for many communities. (File)

With the release of the 2020 Census numbers came redistricting in the state of Alabama, which happens each 10 years and shifts around State House Districts, State Senate Districts, State Congressional Districts and State Board of Education Districts.

The state felt its impact, but Shelby County didn’t have as much shift as many counties across the state.

For the changes that did happen, State Rep. Corley Ellis, who was on the Reapportionment Committee and is the representative for House District 41 said it was all about keeping voting precincts whole and the communities of interest whole.

“That sounds like a simple concept and a simple thing to do, but as it turns out, it’s not as easy as it sounds because if you move something in one district, it has a ripple effect all the way across the state,” Ellis said. “One of the big things to me was the voting precincts. Prior to this redistricting, we had 253 voting precincts that were split, meaning that your neighbor across the street in the same precinct may have a different house member than you did right across the street.”

After redistricting was complete and the new maps approved for House Districts in the state, that number shrunk from 253 splits down to 57.

“Trying to keep communities interest was a big deal to us, and I think we did a pretty good job doing that,” Ellis said.

There were also 46 counties that were split with representatives overseeing communities in more than one county. After redistricting, that number also moved down to 39.

Ellis said the goal was to have representatives representing more of a community or cohesive area than split in multiple different directions so that someone in one city, neighborhood or county would have the same representation.

One of the biggest shifts came in District 45, which is represented by State Rep. Dickie Drake.

Close to 2,000 eligible voters were moved from District 45 to District 48. That largely impacts the Greystone neighborhood and portions of north/northwest Shelby County.

District 45 now has 45,597 residents living in it and covers 158.55 square miles, which is one of the largest territories in the county. The district also covers the Jefferson County portion of Alabama 119.

Previously, the district cut around to include Vincent and the far west corner of the county, but that is now included in Ellis’ district.

District 48, which is represented by State Rep. Jim Carns, covers 41.18 miles, but that small square mileage includes 47,542 residents. The district took over the majority of the Greystone neighborhood and covers the Shelby County portion of Alabama 119 from U.S. 280 to the Jefferson County line. It also covers all of Brook Highland.

State Rep. Arnold Mooney, District 43, also represents areas near both of those districts.

District 43 includes 50.4 square miles, including 48,193 residents.  It is one of three districts in the county that doesn’t spread into at least one other county.

Mooney represents those along Valleydale Road from Riverchase Country Club to the county border north all the way to U.S. 280. It then runs along U.S. 280 and circles back around Shelby County 11 before curving north to encompass all of Indian Springs Village, Oak Mountain State Park and Alabama 119 from Interstate 65 to U.S. 280.

The main shift in District 41 came in the far western portion of the county, which brought areas such as Vincent into the district.

The District 49 representative, Bedsole oversees 632.92 miles and 49,262 residents in portions of Bibb, Chilton and Shelby counties.

The district is now less obstructed and more whole in Shelby County with redistricting fixing a split that brought a portion of District 73 right through the middle of District 49.

District 49 now includes Montevallo and Maylene as well as the entire western portion of the county aside from a slight cut in from District 15.

District 73, represented by State Rep. Kenneth Paschal, is also more cohesive now. The district represents portions of Alabaster along Alabama 119 as well as Pelham and both sides of Interstate 65 between Ballantrae Golf Club and an area just south of Alabama 119.

The district represents a population of 43,602 all in Shelby County and a mileage of 48.96.

State Rep. Allen Farley, who is the representative for District 15 won’t be seeking reelection during 2022, so the redistricting may be more impactful for voters in this area with new candidates running.

District 15 represents portions of Shelby and Jefferson County with a large population of 57,041 and a mileage of 110.51. It is also the most diverse of the districts in Shelby County.

Outside of those changes, there was little shift for the county when it came to the school board, congressional districts and senate districts.

In the senate, there was a small change with District 11 gaining slightly more territory, while District 14 lost a sliver along the Chilton County-Shelby County border.

Congressionally, the county will still be represented by District 6, which is overseen by Rep. Gary Palmer, R-Hoover.

Schools in Shelby County will continue to be represented by Stephanie Bell in District 3.