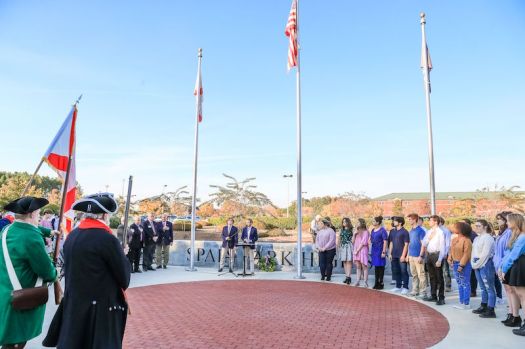 Students in the Armed Forces Club at Spain Park High School lead a dedication ceremony on Wednesday, Nov. 10 at Patriots Corner, a site honoring the school’s alumni who served or are serving in the military. (For the Reporter/Dawn Harrison) 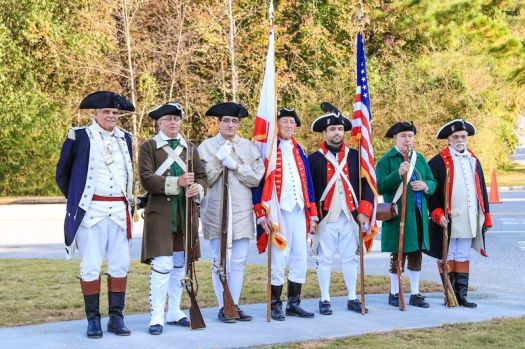 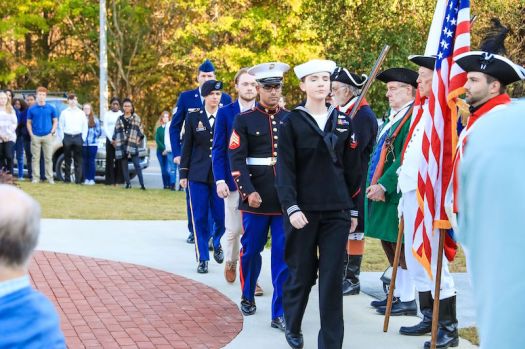 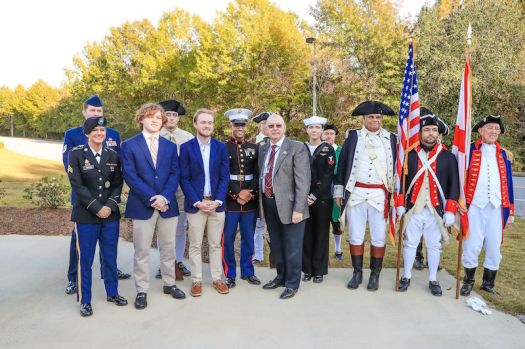 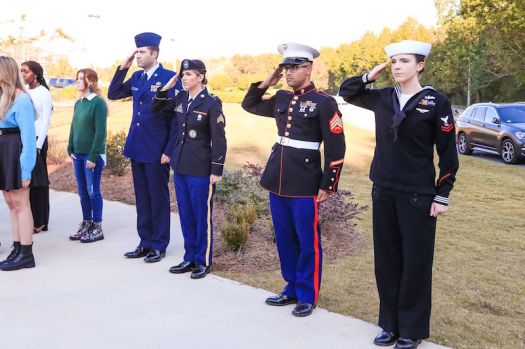 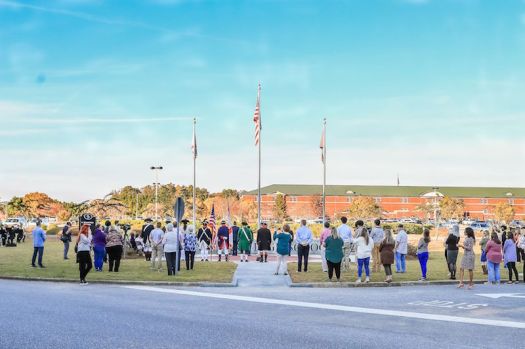 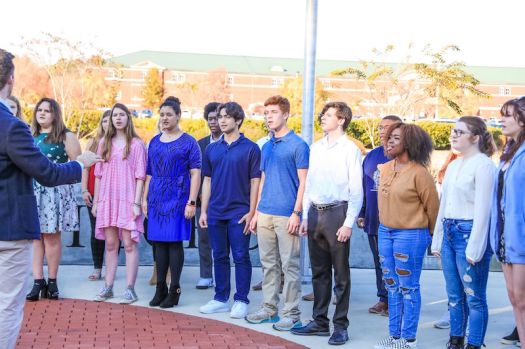 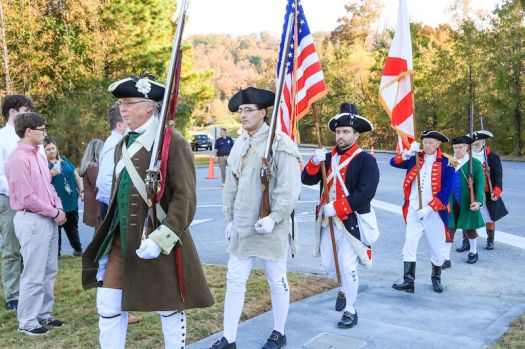 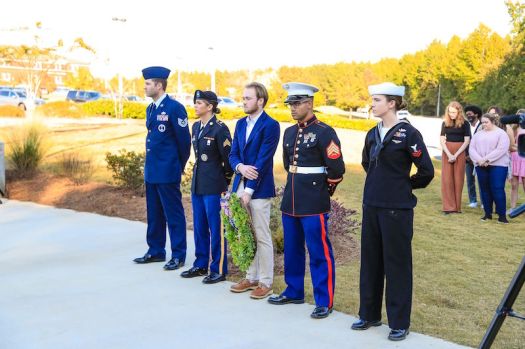 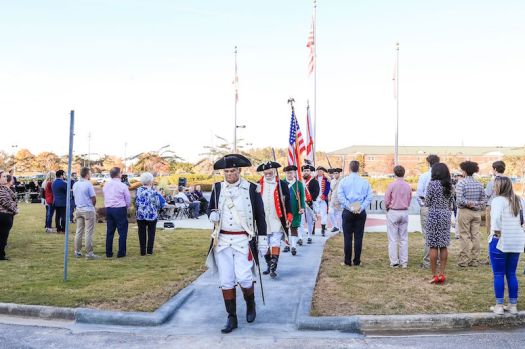 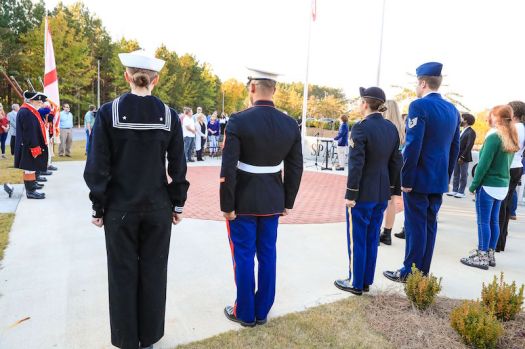 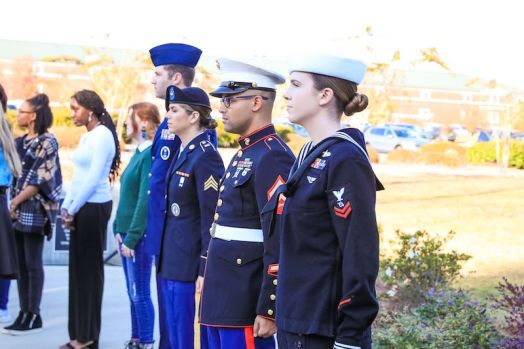 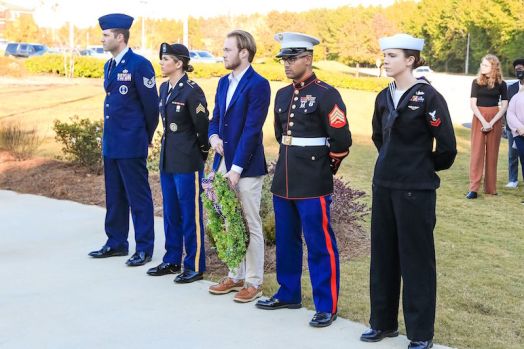 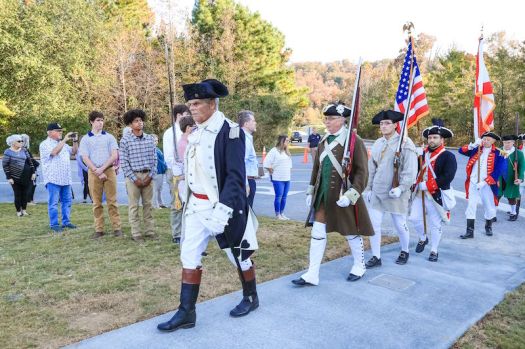 HOOVER – Spain Park High School honored alumni who have served honorably in the United States military at a special place on campus on Wednesday, Nov. 10, the day before Veterans Day.

Students in the SPHS Armed Forces Club led a ceremony at the school’s three-flag patriotic memorial, “Patriots Corner,” to dedicate the first 17 engraved bricks honoring SPHS graduates in the military.

“About one year ago, our principal, Mr. (Larry) Giangrosso, shared his vision for recognizing those Spain Park High School graduates who have served or who are presently serving in the United States military,” Armed Forces Club President Matt Blake said. “We recognize them today because those students put their country’s interest before their own, and they served with honor and distinction.”

Each engraved brick bears a student’s name, branch of service and year he or she graduated.

“Today, we honor those students from Spain Park who have sworn to protect and defend the Constitution of the United States from all enemies, foreign and domestic,” Blake said. “And they serve all around the world. They, and we, have inherited an awesome responsibility, to cherish and to defend our Constitution as free citizens.”

The SPHS alumni honored in the first set of bricks include:

“For us that have been in the service before, this is a high privilege,” Armed Forces Club sponsor M.O. “Buzz” Williams said. “We know we have to pass the baton to the next upcoming generation, but to do that is to educate them. We are raising leaders.”

The Sons of the American Revolution State Color Guard presented and retired the colors.

The SPHS band and choir provided music during the ceremony.

“My fellow Americans, as we look to the future, we will strive, out of gratitude, to become noble citizens of the world’s most diverse, unified and free society,” Blake said. We have a part in a dream that only true patriots share. That dream is ‘A government of, by and for the people;’ a government which rules only with the consent of the governed. A government with appropriate checks and balances.”

Patriots Corner was first dedicated in 2020.

Williams has managed the project behind the scenes, but he credits others who have been involved with it, including Giangrosso and social studies teacher Joe Carter, two of the project’s visionaries; supporters who have contributed monetary and material donations; and those who have constructed the site.

In his speech, Blake recognized state Rep. Arnold Mooney for contributing the flag poles and flags; Hoover City Schools Superintendent Dr. Dee Fowler, the engineers and team of collaborators from the district for working on the design and development of the project; and Mayor Frank Brocato and the Hoover City Council for the construction of the memorial.

“The best things to happen on this campus are things that our students lead and our teachers lead,” Giangrosso said.

Families can order bricks for $50 throughout the year, and the school will dedicate newly purchased bricks near Veterans Day each year.

Families may order one brick per student.

To order a brick, go to Brickmarkers.com/donors/sphs.