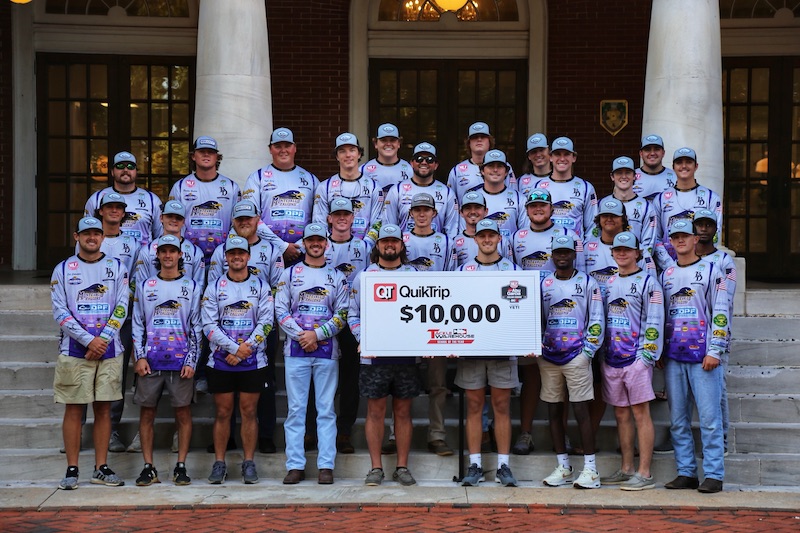 For earning the School of the Year title, a $10,000 scholarship was awarded to Montevallo from QuikTrip to help offset tuition for the students who contributed to the title. (Contributed)

MONTEVALLO – The University of Montevallo’s bass fishing team has earned its second School of the Year title after topping more than 200 collegiate fishing programs throughout the nation during the 2020-2021 season.

The School of the Year title was a team effort for the Montevallo fishing team, which is a part of the UM President’s Outdoor Scholars Program.

In 2019 and 2020, Montevallo was the Southeastern Conference School of the Year, and Grayson Morris and Jacob Pfundt won the College Open on Kentucky Lake. The UM fishing program sent 11 or more teams to each regular conference event during the season.

“We’re proud to be able to have that title,” said William Crawford, Outdoor Scholars Program director and bass team head coach. “It was definitely on our to-do list. Every year we set out and have goals for our team to try to accomplish. The School of the Year title was definitely one of those goals we were trying to reach. We’ve got a good group of anglers from across the country, and their knowledge and skillset are unreal. It’s crazy to think how much these guys know and just how good they are out on the water.”

Throughout the year, the UM fishing team competed in many tournaments against some of the largest universities in the nation and earned points based on their performance.

With six Top 10 finishes in the Southeastern Conference and the College Open in 2021, the UM fishing team took the top spot by a solid margin with 2,332 points on the season.

For earning the School of the Year title, a $10,000 scholarship was awarded to Montevallo from QuikTrip to help offset tuition for the students who contributed to the title.

“Montevallo, as a team, had a really good run, with a lot of strong finishes from everyone on the team,” said Morris, a junior business management major. “Everyone contributed to points this year, and in order for School of the Year to be won, it has to be a team effort. Montevallo really focused on that (teamwork) this year. Our team motto is to make it all about each other, not yourself. Being able to claim that School of the Year title is something that I and the rest of the team will never forget.”