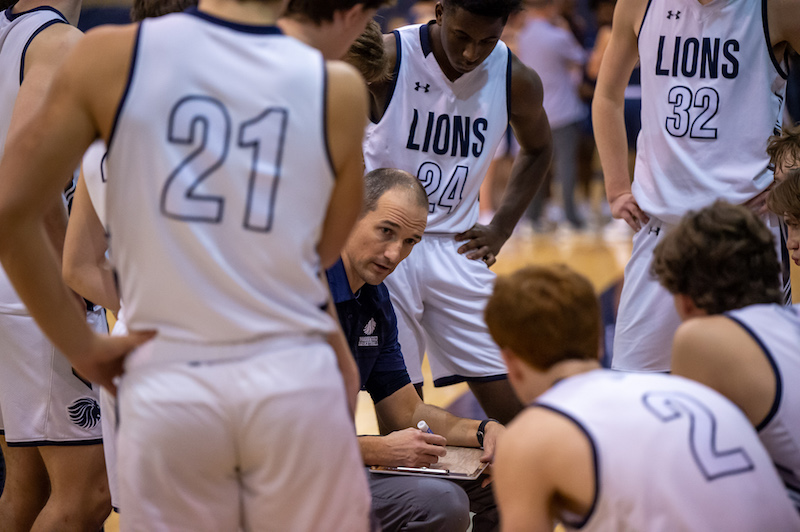 The Briarwood Lions grabbed their first win of the season on Nov. 16 with an impressive defensive effort against Bessemer City. (File)

NORTH SHELBY – In their second game of the season and first with the entire team together following the end of football season, the Briarwood Lions put together an inspiring defensive effort on Tuesday, Nov. 16 against Bessemer City.

The Lions gave up zero points in the opening quarter of the game, which set the tone for a night in which they gave up 25 total in four quarters of play to grab a 49-25 victory.

Briarwood didn’t light up the scoreboard, but the Lions did enough by scoring 13 or more in each of the first three quarters, while the defense gave up seven or less in that span.

In the opening quarter, the Lions got five points from Miles Gilbert, who made one field goal and was a perfect 3-3 from the free throw line, while Luke Schultz and Sawyer Russell both had two field goals to total four points.

Those three helped Briarwood score 13 points and take a 13-0 advantage out of the gate.

Briarwood not only got four points again from Schultz, as well as four from Zach Lamey, but the Lions knocked down two 3-pointers, one each from Drew and Grant Mears.

That gave the Lions 14 points in the quarter and helped them extend the lead to 20 points at the break.

Out of the half, Briarwood was able to scrap together its best offensive quarter of the game with 15 points thanks to six different players scoring points.

The Lions also continued their impressive play on the defensive end, giving up one field goal, while the Tigers hit three of their six free throws for seven points in the frame.

That allowed Briarwood to extend the lead once more and take a 42-12 advantage into the fourth quarter.

Bessemer City outscored Briarwood 13-7 in the final quarter, but the hole was too large for the Tigers to climb out of, leading to Briarwood’s 24-point win.

The Lions had nine players score in the game with eight of those nine scoring at least four points. Schultz led the way with his eight first-half points, while Gilbert and Lamey each added seven. Both Drew and Grant Mears totaled six, while Miller Stubblefield finished with five.