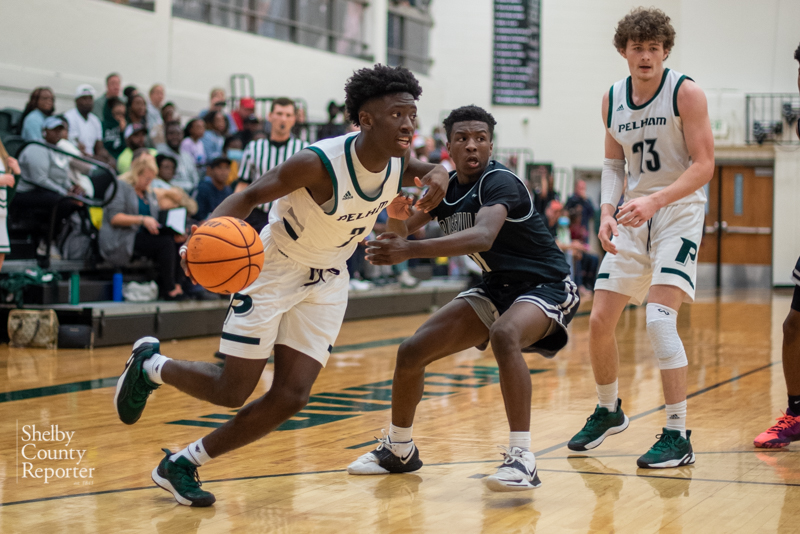 Pelham’s Michael Jones, above, had 31 points to lead the Panthers to their first win of the season on Nov. 16 with an 80-43 win against Tarrant. (Reporter photo/Keith McCoy)

TARRANT – Following a six-point loss to Hewitt-Trussville to open the season, the Pelham Panthers responded in a big way on Tuesday, Nov. 16.

Taking on Tarrant in their second game of the season, the Panthers scored 16 or more points in every quarter of the game and got double digits from two different scorers to pull away for an 80-43 victory.

Pelham played to the tune of strong defense leading to offensive success, and it paid off.

The Panthers gave up 13 points or less in all three quarters of the game, while they scored 22 or more in each of the final two quarters to pull away for the dominant effort.

Michael Jones and Kamari Hollis were two big reasons for the offensive success with Jones pouring in 31 points and Hollis adding 16, but the Panthers also got points from eight others in a balanced attack.

In the opening quarter, however, it was Jones who quickly made his presence felt.

The senior guard drained four total shots, including two from beyond the arc, to post 10 points in the period. The Panthers also got two each from Hollis, Chase Blackburn and Avery Childress, while the defense gave up just 11 to take a 16-11 advantage at the end of the opening period.

Jones continued making a difference in the second quarter with 10 more points to account for 20 of the Panthers’ 35 in the opening half.

Beyond his scoring, Jordan Holloway added an and-1, while Hollis and Korey Perkins each added a field goal in addition to free throws from Hollis and Thompson Gennari.

The defense had its worst quarter of the game, but even with the 13 they gave up, the Panthers were able to extend their lead to 11 points at the halftime break.

Out of the half, Pelham was able to put together its best quarter of the game with 23 points behind four players with at least four points in a balanced effort.

The defense held strong, giving up 12 more, which allowed the Panthers to create even more separation for a 58-36 lead going to the final quarter of play.

Pelham then closed the game out with its best defensive quarter of the night, giving up seven points, while the offense got three or more points from four different players for the second quarter in a row to post 22 more points and finish off the win.

Beyond Jones’ 31 and Hollis’ 16, the Panthers got nine from Gennari and five each from Holloway and Childress. Blackburn added four, while Darius Copeland and Roy Gonzalez each had three in the winning effort.