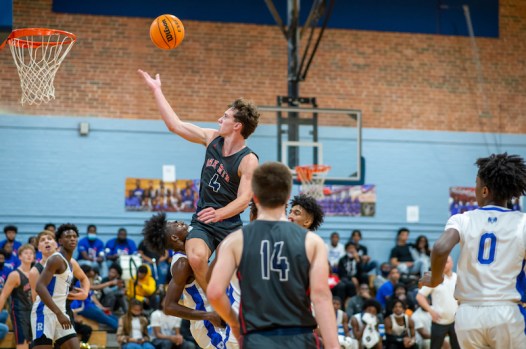 Wilder Evers soars to the basket during Oak Mountain’s 49-38 win against Ramsay on Tuesday, Nov. 16. (For the Reporter/Larry Dancy) 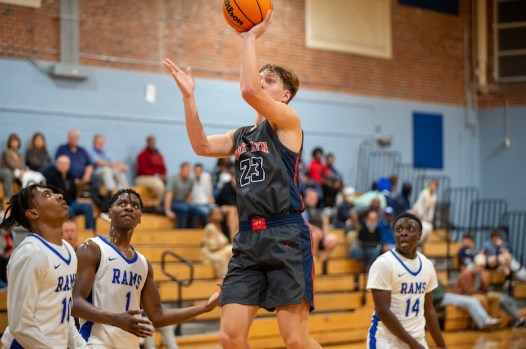 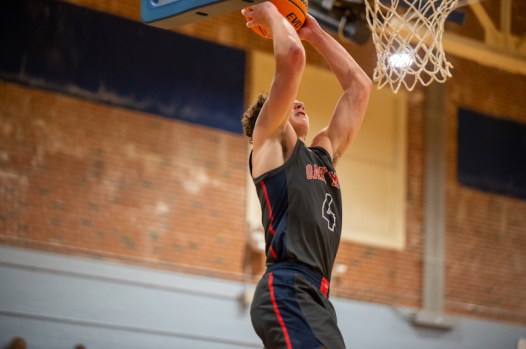 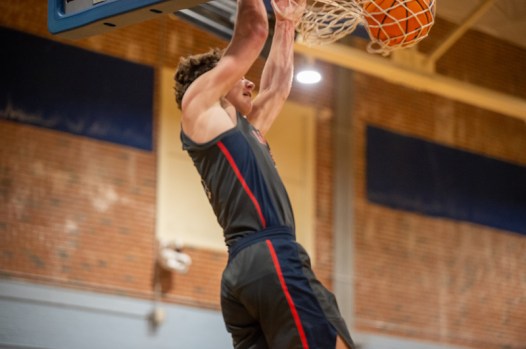 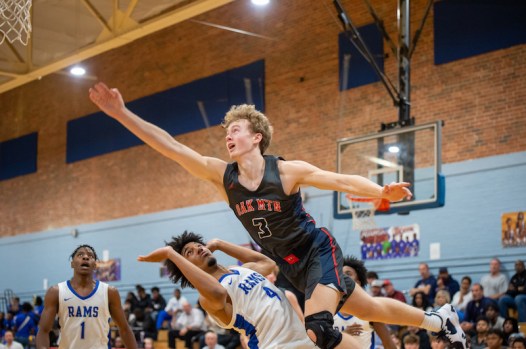 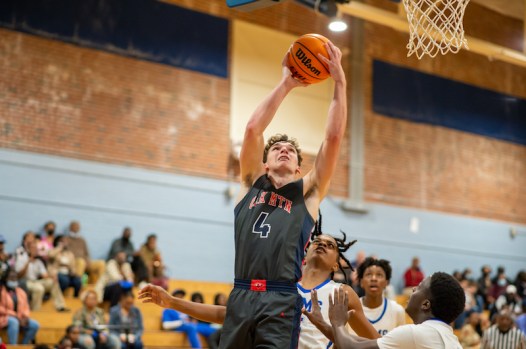 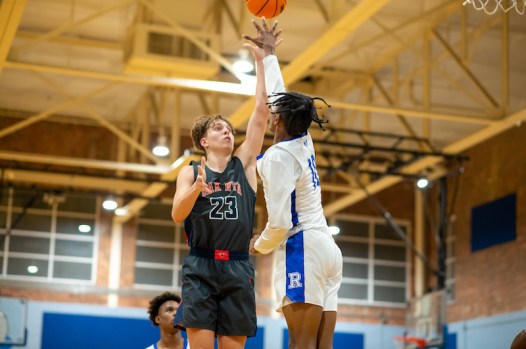 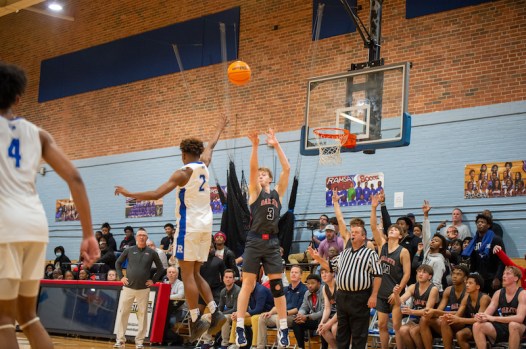 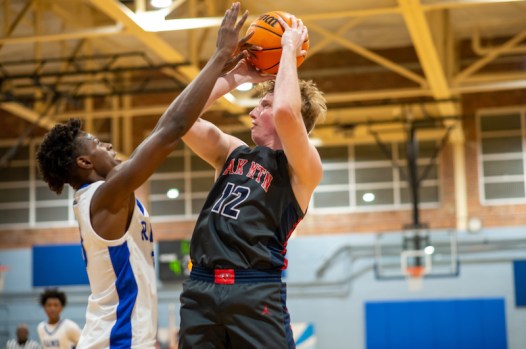 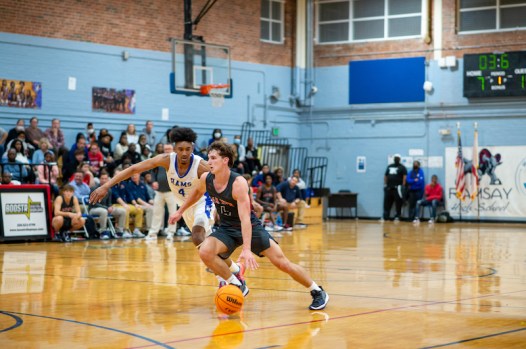 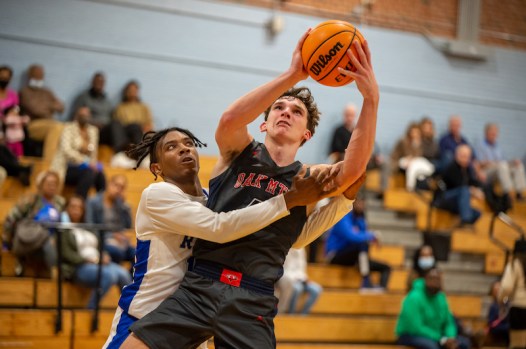 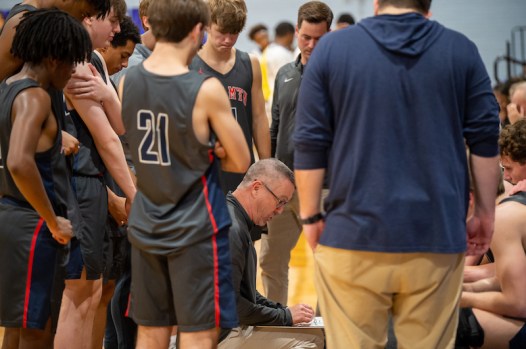 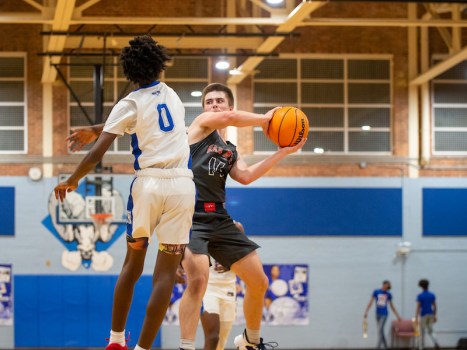 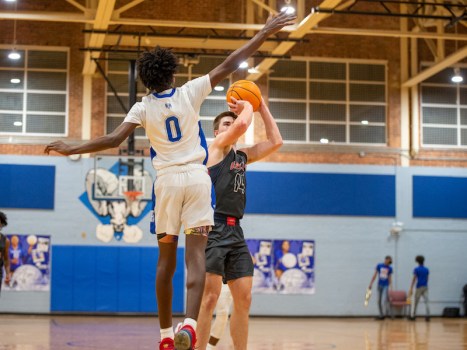 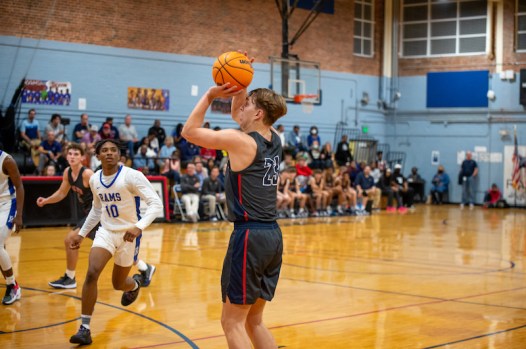 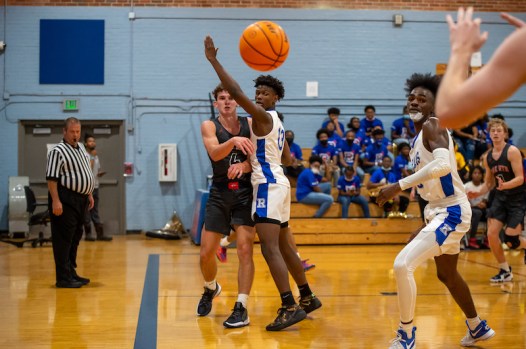 BIRMINGHAM – It may have only been the second game of the season, but game two for the Oak Mountain Eagles was an important one on Tuesday, Nov. 16.

Taking on Class 5A Ramsay in a battle of two teams that played for state championships last season, it gave the Eagles a good early-season test.

And they didn’t disappoint.

After a good 64-52 win against Mae Jemison in the opener, an Elite Eight team from Class 5A last year, the Eagles came out confident against the Rams in the opening quarter.

Oak Mountain put together a 14-7 opening quarter, and never looked back from there en route to a 49-38 victory.

The Eagles actually stormed out to an 8-0 lead in the first quarter, and eventually led 14-2 before Ramsay battled back with a 5-0 run to end the quarter and trim the deficit to seven points.

Oak Mountain got two field goals each from Wilder Evers and Ean Gove, while Ryan Giegel and Matthew Heiberger each added one in addition to two free throws from Brady Dunn, as the Eagles put together a balanced opening quarter.

But it was the defense that was the highlight and led to success offensively.

That carried into the second quarter, as the Eagles held Ramsay to seven points for the second period in a row on three made field goals.

Oak Mountain’s offense wasn’t quite as lethal in the second quarter, but an and-1 from Giegel and a 3-pointer from Dunn played a major factor in nine more points to help the Eagles take a 23-14 lead into the half.

Out of the break, Oak Mountain’s defense didn’t skip a beat, limiting Ramsay to single digits for the third quarter in a row at eight points, while the offense put together its best quarter of the game.

A big reason for that was Dunn catching fire.

He hit two from beyond the arc and went 3-4 from the free throw line to total nine of Oak Mountain’s 15 points in the period.

That helped the Eagles build a 16-point, 38-22 lead going to the final quarter.

Ramsay did save its best quarter for last, scoring 16 points in the final quarter on seven made shots, but four points each from Evers and Heiberger helped the Eagles hold off a comeback attempt for the 11-point victory.

Dunn led the way for the Eagles with 14 points and eight rebounds, while Evers was right behind with 12 points and seven rebounds. Heiberger, Giegel and Gove each had eight, seven and six points, respectively.