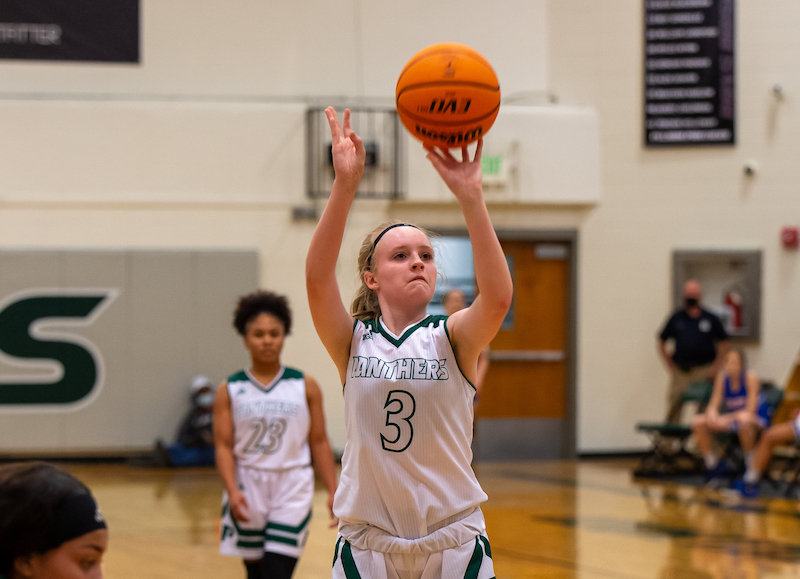 Laci Gogan had 16 points in the first quarter to help set the tone for a dominant night in Pelham's season opener on Nov. 16. (File)

TARRANT – There was no opening-game rust for the Pelham girls basketball team on Tuesday, Nov. 16 in a road trip to Tarrant.

The Panthers put the first-game jitters away quickly en route to a dominant win, holding Tarrant to two points in the game, while the offense posted 41 in the opening quarter, eventually leading to a 66-2 victory.

The majority of the game’s action took place in the opening eight minutes, as Pelham got at least one field goal from seven different scorers, while five had four or more points in the period.

Laci Gogan was the highlight, as the junior drained four 3-pointers and two additional field goals to total 16 points in the period.

Teammate Karma Wynn also had an impressive opening quarter to the season behind four made field goals to total eight points, as she and Gogan combined for 24 of the 41 in the first quarter.

Savannah Scarbrough chipped in five with one 3-pointer and a made field goal, while Myriah Tate and Jaslyn Heflin each had four. Tate knocked down two field goals in the frame, while Heflin hit one and made both of her free throws.

Victoria West and Katlyn Hollingsworth each added one field goal to complete the 41-point period.

And defensively, it was the start of a dominant night for the Panthers. Tarrant only made one field goal, while the Wildcats missed all four free throw attempts.

With a 41-2 game in the second quarter, play slowed down with new faces getting time on the floor, which led to a scoreless and quick eight minutes of play, creating a 41-2 game at the half.

Out of the halftime break, Pelham got back into the scoring column with 18 more points, including six each from Hollingsworth and Wynn. Hollingsworth drained two from beyond the arc, while Wynn hit three field goals.

That helped the Panthers extend the lead to 59-2 going to the final quarter.

The Panthers added seven more in the fourth quarter to create the 66-2 final score.

Gogan led Pelham with 18 points in the win, 16 of which came in the first quarter, while Wynn added 16. Hollingsworth gave the Panthers three in double figures with 10 points, while nine total players scored in the win.