Pelham’s Barry Blount awarded with Veteran of the Year award 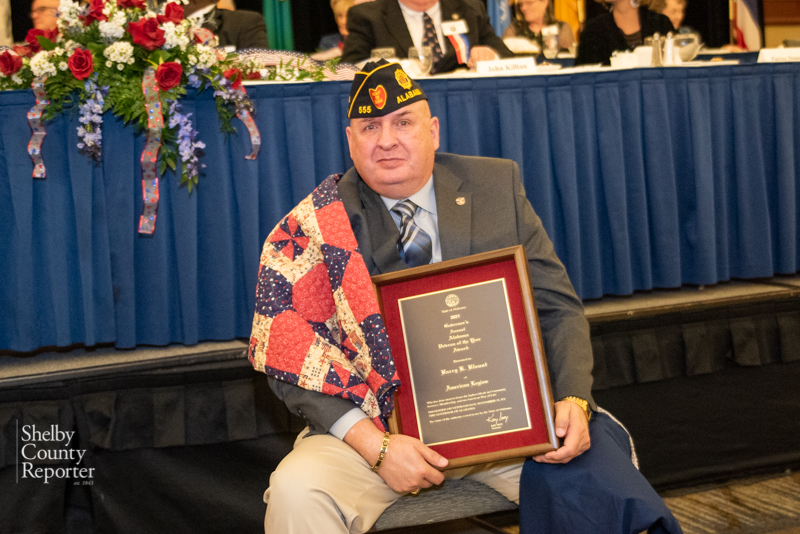 Pelham’s Barry Blount was honored with the Veteran of the Year Award on Wednesday, Nov. 10. Blount served in the United States Military for 28 years, and has devoted his time since retirement in 2005 to serving his community. (Reporter Photo/Keith McCoy)

PELHAM – Residents of Pelham are very familiar with Barry Blount. From his work advocating for military veterans to his involvement in the community, Blount has carved a special place in the hearts of everyone he meets.

On Wednesday, Nov. 10, Blount was awarded the Veteran of the Year Award by the National Veterans Day Foundation. Blount was surrounded by his family and close friends, who beamed with pride and love as Blount crossed the room to receive his award.

On a day where most people would be soaking up the spotlight, Blount spent the evening instead praising those who have supported him and worked with him throughout his career.

He said his whole life he has purposefully surrounded himself with strong people in the community.

“This award tonight, it isn’t about me,” he said. “It’s about the people who surround me and got me here.”

Throughout the evening, Blount praised the hard work and determination of his son, Matthew. As he spoke of his son’s continued dedication to service even through his cancer diagnosis, Blount became emotional.

Blount spent 28 years serving in the U.S. military, and since his retirement in 2005, he has thrown himself into his work representing veterans and those in his community.

In 2014, he began the American Legion Post 555. Every year, the post holds a memorial ride from Pelham to the National Cemetery in Montevallo in honor of Blount’s son, Matthew, who died from cancer in 2012. In turn, the post sponsors local Scout Troops, and through their Junior Shooting Program, provides scholarship opportunities to America’s youth.

“A lot of kids don’t know that opportunity is out there for them,” Blount explained.

The shooting program keeps record of the students’ marksman scores so when the time comes to apply to universities that have shooting programs of their own, they’ll be able to submit their scores for scholarship consideration.

“It’s only through American Legion that they can get involved in that scholarship ability, and we totally encourage those kids to come through the Civilian Marksmanship Program,” Blount said.

Blount was especially moved at the sight of Carley Seabrooke, a member of Scouts Troop 219 and one of the students involved in the Junior Shooting Program.

“She came up to me and she said, ‘Mr. Blount, it was such an honor to be here when they awarded that to you.’ And I said, ‘Yes, thank you, ma’am, I’m very fortunate,’” Blount said. He then proceeded to praise Seabrooke for her top marks in marksman shooting.

“I’m very proud of her,” he said. “And she just keeps getting better.”

Blount has always lived his life by the philosophy that your time on earth should be spent helping others whether through military service or in civilian life. It’s a belief he instilled in his children that his son Matthew carried with him until his death, and his sons AJ and David carry that with them to this day.

Blount was presented with a plaque signed by the governor, and was draped with a Quilt of Valor. His son AJ said receiving the award was “a huge accomplishment” for his father after his years of hard work and dedication.

“My family is known for service to our community and country, so this award will be held dear to my father,” AJ said. “He has always pushed myself and my brothers to live for a bigger cause and he has always led by example.

“We have a running joke in our family that our Dad has two sons who outrank him. So, I was a little disappointed when the emcee read his bio while he was walking up to receive his award and failed to mention this. He never once mentioned that my father had two children that became officers and went a different route than he did. That’s an ongoing joke within the family as it is in the military between officers and enlisted. We are extremely proud of him in everything he does knowing that he will always put God and country first.”

“All I can say is thank you, Lord, for how you have blessed me,” Blount said later. “Also, again, the people who surround me are the ones who get credit. They put these programs together, and I can’t say enough about them.”