“Something for everyone”: Lacrosse in the Shelby County community 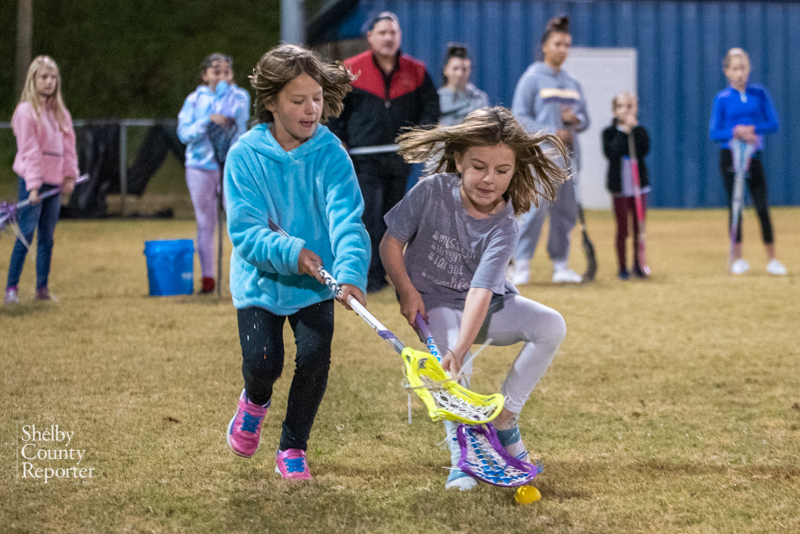 Buck Creek Lacrosse has opened the door for kids interested in the sport of lacrosse with their Monday night program. The program was held the first three Mondays of November, and taught the basics of lacrosse to kids from kindergarten through eighth grade. (Reporter Photo/Keith McCoy)

The Kingwood field in Alabaster was alive with chaotic energy on Monday, Nov. 15, as 50 or so children ran through the field with their lacrosse sticks in the air. It’s been this way for the past three Mondays as Buck Creek Lacrosse has hosted their beginner lacrosse program. Shelby County kids from kindergarten to eighth grade came out to learn about the sport, and provided them a chance to actually play before signing up for the spring season.

The program has been a huge success, and many parents that were out said their kids were already looking forward to playing on a real lacrosse team. The program was open to all Shelby County kids. Though this was the last night of the program, this was not the end of the lacrosse journey for many children.

Lacrosse has grown in popularity in the past few years, gaining a new reputation for being a sport everyone can enjoy.

Jim Wiley, Buck Creek Lacrosse’s president, said the game stands out due to its fast-paced structure, and said lacrosse truly is for everyone.

“It is a fast paced, physical, and high scoring game with nonstop action,” Wiley said. “Plus, kids of all shapes and sizes can contribute to the team. One of the beauties of lacrosse is that everyone brings something different to the team to make the team successful. I also think that lacrosse has grown because other sports have turned families off because they have gone to travel or clubs instead of being recreational, so kids and families are looking for something that they can play in their community with people they know.”

Jason Peterman, a Pelham father, came out each Monday with his son and said his son has fallen in love with the sport.

“My son wanted to come because he wanted to try something different than the traditional sports,” he said. “So, we came the first night and he had fun, wanted to come back the second night, and then he brought a friend with him. They look forward to it and they’ve had a blast.”

“Honestly, the guys running the league have done an awesome job,” Peterman said. “It’s so great. One of the great things about Shelby County growing is we’re getting new sports. If you want your city to grow that’s part of it.”

Peterman said they are definitely signing his son up for lacrosse in the spring.

“They’re more active doing this,” Peterman said. “I mean I love baseball, but you can go out there and sit out in left field, right field, center field or first base for a long time if you have a good pitcher. With this they’re running so much and this is just different.”

Tim Smith is another parent who says his son, Kohen, has also fallen for the sport. Smith said he’s noticed a genuine feeling of excitement and enjoyment in Kohen when he gets to play.

“The last few years he did baseball, he didn’t really have any fun with it, and now he says he’s found something he enjoys,” he said. “He just lights up when he gets to play it. He actually gets upset when practice gets canceled.”

Smith said he’s excited to see the other lacrosse programs that are popping up across the county.

“Helena’s got a team now, Alabaster’s got a team, so what’s going to be nice is that you’re going to have this new experience level of these kids coming up and taking over after the high school kids leave, and it’s just going to keep getting better and bigger,” Smith said.

“It’s very fun,” Kohen said. “I love the sound when it hits the net. It’s an amazing sound.”

Like most new experiences, Kohen wasn’t totally sure at first that he would be good at the sport.

“At first, I felt I was very terrible at it,” he said. “I couldn’t throw the ball at first, but then I started getting used to it. I’m going to try to keep doing it as long as I can.”

Kohen said he’s made a lot of friends from Helena, Pelham and Alabaster taking part in the program, and he added he’s very excited for the spring season.

Several girls came out to the field with eager smiles ready to have fun and learn something new. The girls present had the pleasure of being coached by members from the University of Montevallo’s women’s lacrosse team. Montevallo team member Delaney Deffke has been playing lacrosse for four years now, and she said the team building skills you learn in the sport are vital to everyday life.

“The team aspect of it, you just can’t do it by yourself,” she said. “You have to rely on other people, and there’s a lot of talking involved. It brings you out of your shell and teaches you how to talk to other people. I know I was a very shy kid, and doing team sports like this it definitely opened me up from my shell.”

Registration is open for the spring season now, and according to Wiley, late registration starts Dec. 16 and ends Dec. 31. Practices start mid-January and the season begins near the end of February and early March. For more information on Buck Creek Lacrosse, visit their Facebook page.