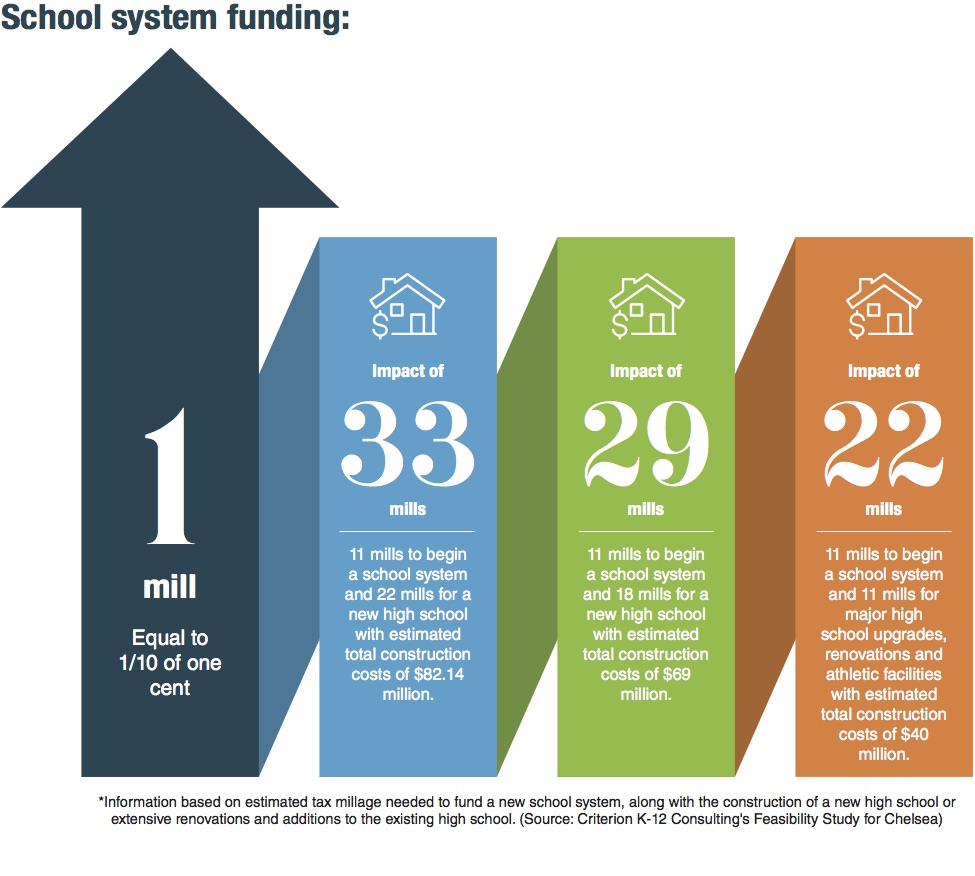 CHELSEA – City leaders have discussed the possibility of Chelsea forming its own school system in recent months, and on Thursday, Nov. 18, they heard the results of a feasibility study they authorized in June to determine how it could be done.

During a special called work session, the Chelsea City Council heard a presentation from representatives with Criterion K-12 Consulting, who conducted the study to evaluate the potential requirements if Chelsea were to separate from Shelby County Schools and form an independent municipal school system.

The City Council also heard a facility assessment of the existing Chelsea High School campus and programming for a new high school from the Goodwyn Mills Cawood architecture firm.

Mayor Tony Picklesimer described the work session – which was open to the public at City Hall and live-streamed on the city’s Facebook page – as an “early step in a marathon,” adding residents will have opportunities to ask questions and submit comments to the council during future public hearings.

The goals of the feasibility study were to look at available tax revenues and identify any additional revenues needed to support a new school system in Chelsea, along with annual expenses assets, transportation costs, long-term debt service and adequate revenue streams to maintain a one-month operative reserve for the school system.

“The feasibility study’s purpose is not to make any recommendation as to whether the city of Chelsea should move forward with the formation of its own school system,” reads the introduction of the report, which spans nearly 100 pages. “Instead, the study is designed to provide financial, student enrollment trends and other relevant data that may equip city leaders with the information needed to make an informed decision when determining how they may wish to proceed in considering the formation of an independent municipal school system.”

The study shows three possible student attendance zone models for a potential new school system; however, the first model, referred to in the report as “School System A,” is no longer considered a viable option. This model was based on a student attendance zone as it is currently serving students from several unincorporated areas, the city of Chelsea and the town of Westover.

“That determination was based upon factors attendant to annexation of property not currently in the city of Chelsea, including the levy of six years of fire dues which the Cahaba Valley Fire Department intends to levy on landowners whose property joins the city of Chelsea, and the expressed sentiment of various citizens living within the unincorporated areas of the county served by the current student attendance zone of their desire not to become annexed into a city,” the report reads.

Additional and more detailed analyses of the other two models’ financial requirements, including project startup costs and financing construction costs associated with a new high school, are highlighted in the study.

Pro forma budgets for each model were formed based on past historical data and future hypothetical financial-related assumptions and conditions. Each budget also identifies possible millage increases needed to form a school system and help sustain it in the future.

Regarding property tax calculation, McPherson explained a “mill” is equal to 1/10 of one cent, so for 11 mills, a single-family owner-occupied home with fair market value of $100,000 has an assessed value of $10,000 (10 percent assessment ratio), and will produce $10 of tax revenue per mill, per year.

Funding options in a general fund analysis for each school system model were as follows:

Regarding school system funding and a new high school, the study indicated:

• The impact of 33 mills – 11 mills to begin a school system and 22 mills for a new high school with estimated total construction costs of $82.14 million.

• The impact of 29 mills – 11 mills to begin a school system and 18 mills for a new high school with estimated total construction costs of $69 million.

• The impact of 22 mills – 11 mills to begin a school system and 11 mills for major high school upgrades, renovations and athletic facilities with estimated total construction costs of $40 million.

City leaders cited Chelsea’s fast-paced, ongoing growth as a significant factor in the city’s discussion of forming its own school system.

From 2010-2019, Chelsea’s population grew by nearly 4,000 residents, an increase of 39 percent, according to information on Cityofchelsea.com.

Projections indicate an additional 650 homes will be built in the city by 2025, representing growth that extends to Chelsea’s sister communities whose families’ children currently attend one of the schools in the Chelsea student attendance zone.

The combined student enrollment for the schools exceeds 4,600.

New and improved school facilities – namely, a new high school – are at the top of the priority list.

“Frankly, we need a new high school and we need improvements to our middle school,” Picklesimer said in a previous meeting. “These two facilities are the driving force to this study.”

Although it has undergone additions and renovations, the current Chelsea High School opened in 1992 with fewer than 600 students enrolled. The 2021 ninth month reported attendance at CHHS was 1,385.

The school system discussion has elicited mixed reactions from residents, as have discussions about the potential annexation of nearby communities into Chelsea city limits should Chelsea decide to move forward with forming a separate school system.

Public meetings were held in Westover and Mt Laurel to give residents in the communities an opportunity to ask questions and gather more information about the annexation process.

“These discussions and public meetings in Mt Laurel have led to the decision to take the annexation of Dunnavant Valley off of the table,” Picklesimer said at a Chelsea Business Alliance luncheon in October. “This will reduce the student count of our proposed system by just over 1,000 students if we are successful in the merger of the city of Westover.”

Any annexations would have to be decided by a vote of the particular area’s residents.

If Chelsea decides to move forward with the formation of a new school system, a possible timeframe is about two years for all necessary steps to be completed before the system begins its operations.

If the city opts to build a new high school, two years of planning followed by two years of construction should be anticipated, according to the report.

“We may have different opinions, we may come from different viewpoints,” Dr. Phil Hammonds with Criterion said, “But when it comes to something as important as education and children and students, sitting around that table in a spirt of goodwill and transparency and working together, good solutions come out of those kinds of scenarios, whatever the final solution may be in terms of what the decision might be.”

Visit Cityofchelsea.com to view the full feasibility study and the facility assessment and programming for a new Chelsea High School documents.

To view the video of the Chelsea City Council’s Nov. 18 work session, go to the city’s Facebook page.