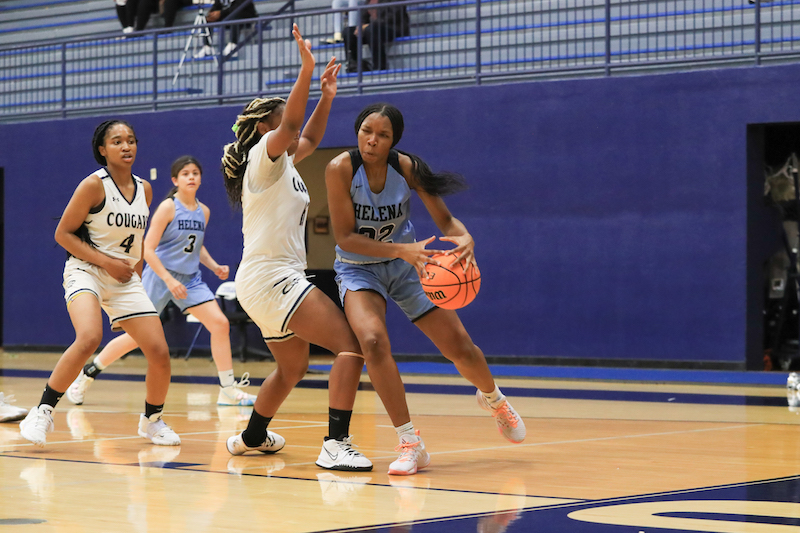 Helena’s girls basketball team fell to Clay-Chalkville in a low-scoring battle on Thursday, Nov. 18. (For the Reporter/Dawn Harrison)

PINSON – Helena’s defense came ready to play against Clay-Chalkville on Thursday, Nov. 18, but unfortunately for the Huskies, so did the Cougars’ defense.

In a battle that only saw a combined 21 points from both teams, Clay-Chalkville was able to limit the Huskies to 11 combined points over the final three quarters of the game to pick up a 30-19 victory.

Helena’s defense played well throughout, not giving up more than 11 points in any quarter and giving up eight or less in the first three quarters, but the Huskies struggled to find an offensive rhythm.

In the opening quarter, it looked as if they might be able to overcome that with Clay-Chalkville not able to find any success on the offensive end of the floor other than one made jumper and one 3-pointer.

Helena got four points from Alana Scott and two each from Olivia Johnigan and Brooklyn Kelley to total eight in the period for an 8-5 advantage.

The rest of the game, however, Helena only made one more field goal combined than they did in the first quarter.

In the second quarter, the defense continued to help the Huskies overcome the offensive woes, as the two teams each made just one field goal in the period.

The difference, however, came at the free throw line. The Cougars earned three trips to the stripe and made three of six free throws in the frame to total six points.

Thanks to their lone shot made being a 3-pointer, they took an 11-10 lead into the half.

The break, however, didn’t do much for either offense, but Clay was able to find a slight rhythm with four made baskets and eight total points in the third quarter.

Helena, on the other hand, was held to one field goal for the second quarter in a row, which allowed the Cougars to extend their lead to 19-11 going to the final quarter.

Despite being just an eight-point game, that was a steep uphill climb for the Huskies in such a low-scoring game.

Helena did attempt to threaten the Cougars in the final quarter with seven points on one 3-pointer and two field goals, but Clay answered with two from beyond the arc that became daggers in the 11-point win.

Scott led Helena with eight of the team’s 19 points, while Johnigan added four.