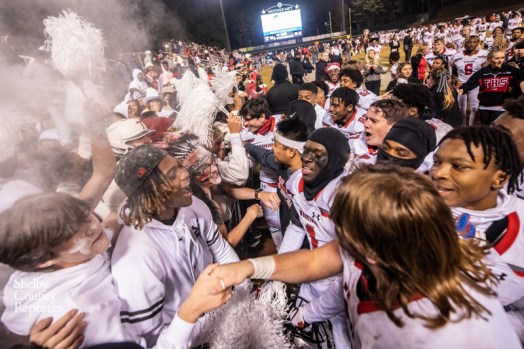 Thompson players celebrate after taking down Hoover 35-10 to earn their fourth consecutive trip to the state championship. (Reporter photos/Keith McCoy) 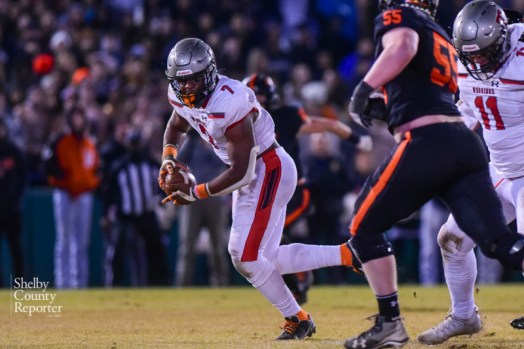 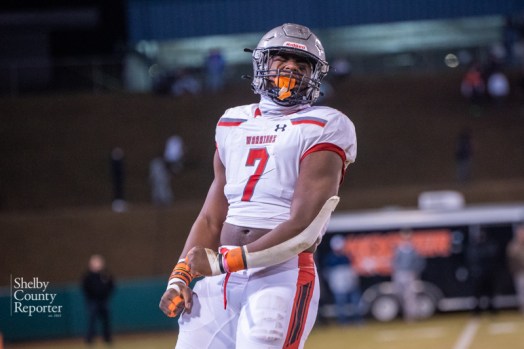 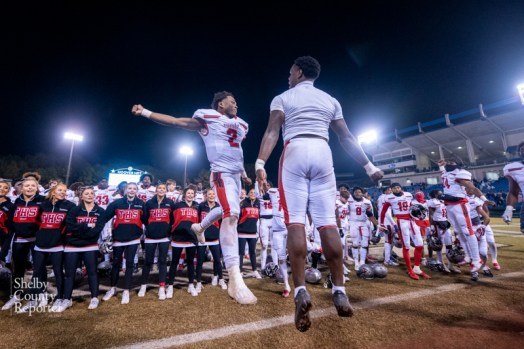 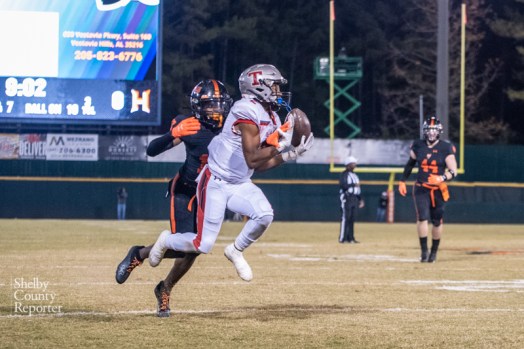 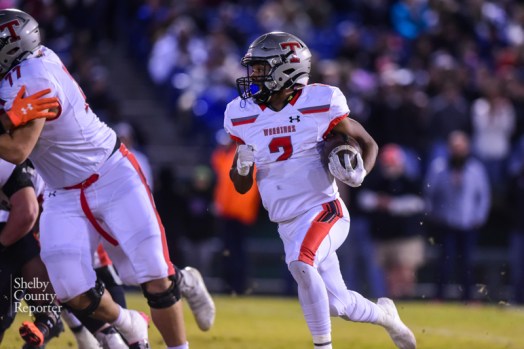 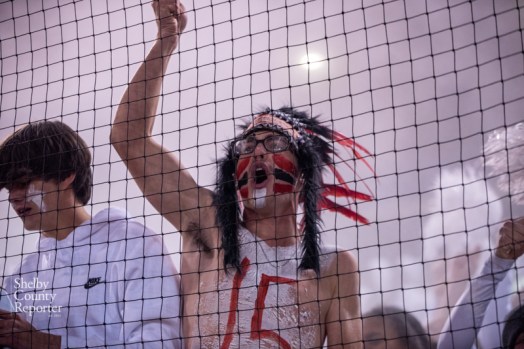 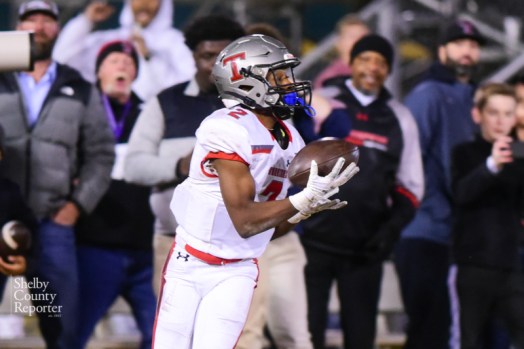 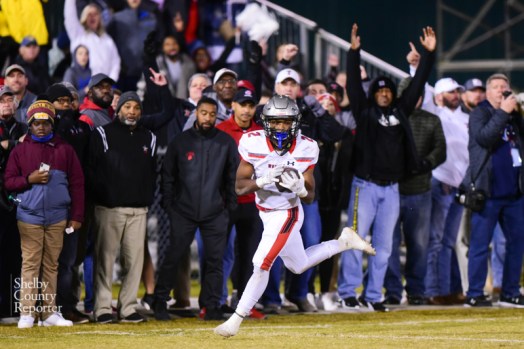 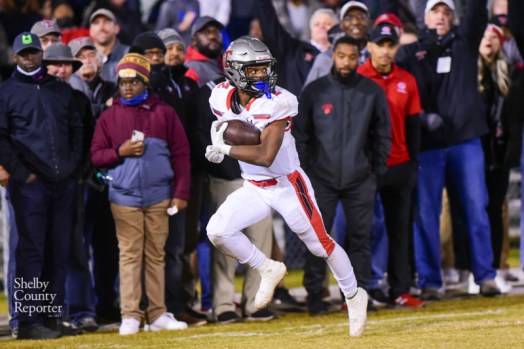 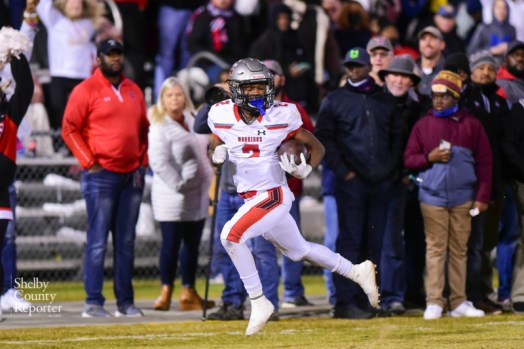 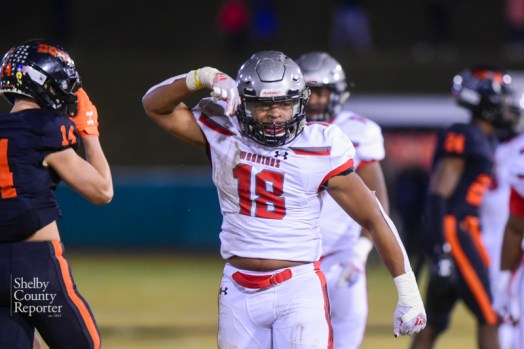 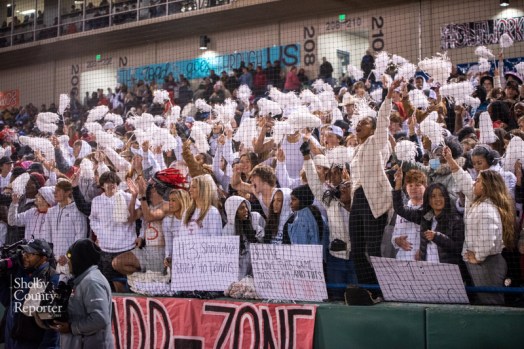 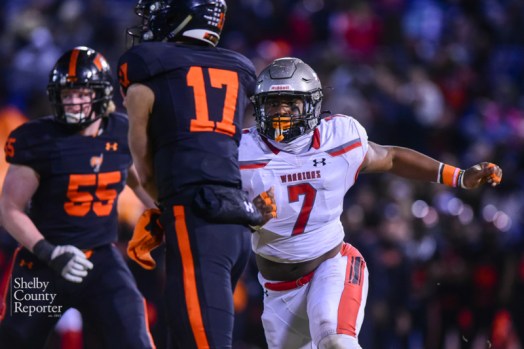 The Thompson Warriors are eyeing a third consecutive state championship, but they'll have to get by undefeated Central-Phenix City tomorrow night in order to get it. (Reporter photo/Keith McCoy) 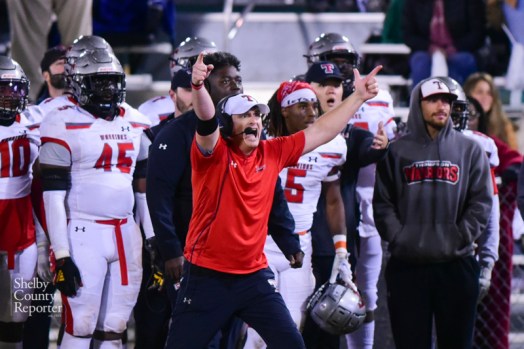 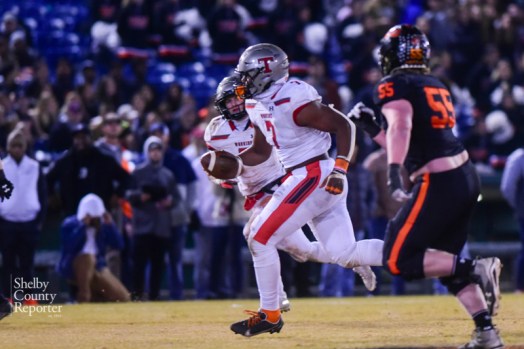 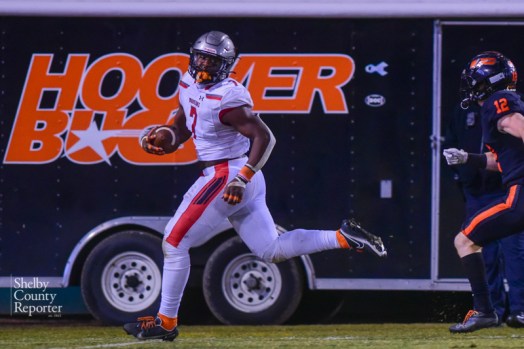 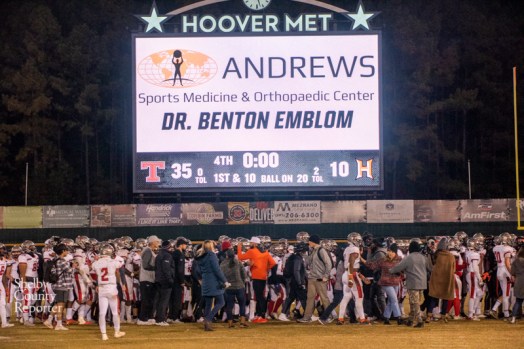 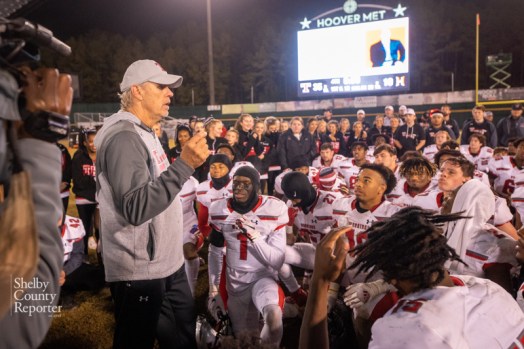 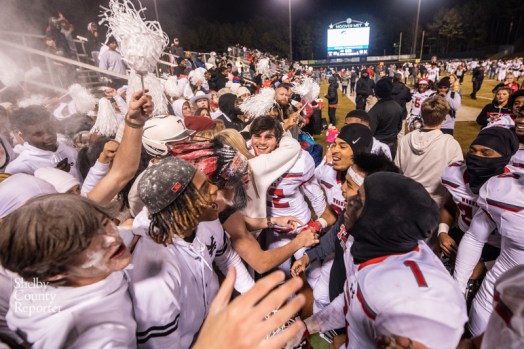 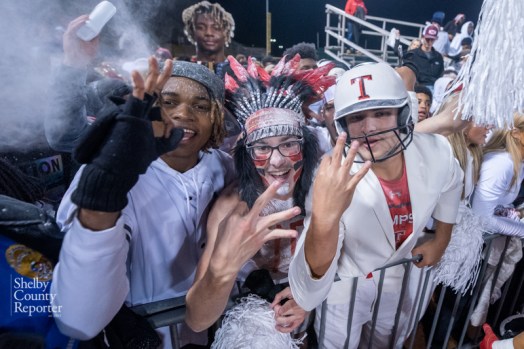 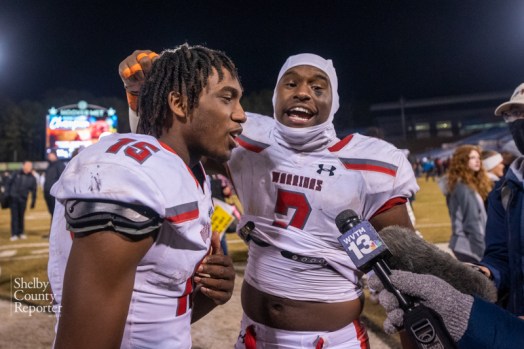 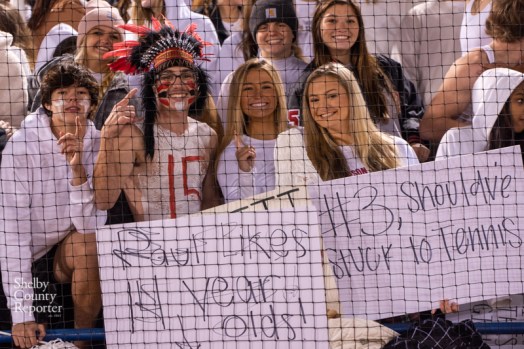 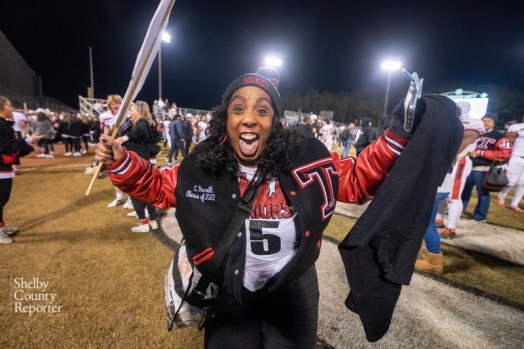 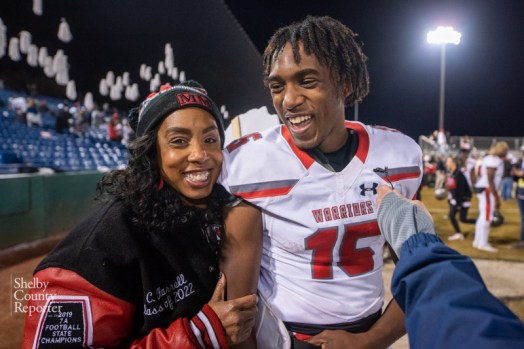 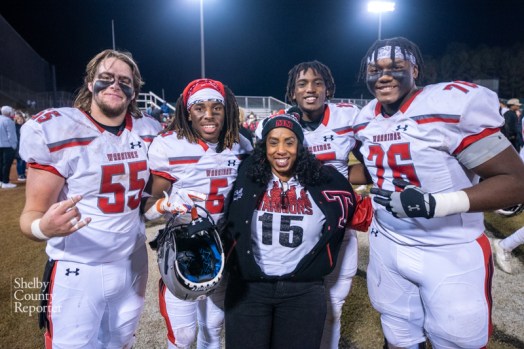 HOOVER – Following a 24-21 loss to Hoover on Oct. 22, the Thompson Warriors set their sight one goal—proving they were better.

They took it one week at a time, beating Florence 49-10 and Oak Mountain 45-7 in the first two rounds of the playoffs, but then, the Warriors got their shot; and they didn’t disappoint.

Taking on the Bucs in the Class 7A semifinals on Friday, Nov. 19, Thompson scored 21 points before Hoover put points on the scoreboard with a final-second field goal to end the first half, but the deficit was too much.

The Warriors added two more scores in the third quarter to complete a 35-10 victory and advance to the state championship for the fourth consecutive year.

“We wanted it really bad,” defensive lineman Peter woods said after the win. “It’s a crazy game. Coach (Mark) Freeman was talking this morning before the game about going back and taking what we left on the field. We don’t believe that we came over here and allowed Hoover to beat us. Last time, everything we gave them, they took. So we decided we were going to come back and take what we gave them.”

And that’s exactly what the Warriors did.

Hoover threatened twice in the first half, but only on the first and final drives.

Everything in between was Thompson.

Following three-and-outs by both teams on their first two drives, it was the Bucs who did get the first shot to put points on the board with a 20-yard field goal attempt, but the kick came off flat and missed low and wide left.

Thompson quickly answered with an 80-yard drive in eight plays. It was highlighted by a 43-yard from quarterback Conner Harrell and then finished by a 13-yard run from Justin Pegues to put the Warriors in front 7-0 with 2:54 left in the opening quarter.

On Hoover’s ensuing drive, Jeremiah Alexander and Peter Woods combined for a sack on third-and-3 to force another Bucs’ punt.

That gave the Warriors the ball back with 47 seconds left in the first quarter, and they capitalized again.

This time, Harrell hit several big pass plays, including a 13-yard pass to Jaylen Ward, a 25-yard pass to Ryan Peppins and then a 19-yard touchdown pass to Peppins on third-and-7 to cap off another eight-play drive that put Thompson in front 14-0 with 8:58 to play in the half.

That was followed by another strong two drives from Thompson’s defense after the two teams punted on the next three possessions.

Thompson, however, found the end zone one more time in the half, and it was the connection of Harrell and Peppins once again.

This time, Peppins snuck behind a defender and Harrell threw him open with the defender unaware of who was behind him. It led to a 42-yard touchdown and 21-0 lead with 2:35 to play before the break.

Thompson had hopes of one more scoring chance after forcing Hoover into a third-and-5 at its own 27 with their backup quarterback in the final 1:20 of the quarter, but the Bucs put together their first string of plays since the first drive.

Backup Evan Reeder was hit on the follow through of his throw by Peter Woods, and while the ball floated in the air for a while, RJ Hamilton was wide open for a 50-yard catch.

The Bucs then got down to the 6-yard line, and after an incomplete pass left one second on the clock, they kicked a chip-shot field goal as time expired to make it 21-3 at the half.

The Warriors, however, got the ball to start the second half, and they quickly added to their lead.

It took just three plays thanks to a 24-yard run from Pegues followed by a 15-yard late-hit penalty and a 10-yard run from Brandon Franklin. That set up the third touchdown connection between Harrell and Peppins, this time from 29 yards out to make it 28-3 with 11:18 left in the third quarter.

Hoover seemed to be putting together a solid drive to answer with several throws over the middle of the field from Reeder, but then came the dynamic duo.

On third down, Woods snuck around the end, hit Reeder and forced the ball to pop out of his hands into the hands of Jeremiah Alexander. The star defender caught the ball and went close to 50 yards for the pick-six.

“The tackle had been leaning on me the whole game,” Woods said. “I had been setting him up with power moves, and then, I just thought, ‘Ok, long third down, I need to make a big play.’ I kind of faked power and shifted back out with a double swipe and it was just there. The quarterback, his back was to me, so it just fell into my hands, I just had to execute.”

It was a special moment for Alexander during his senior year to help seal the game and send the Warriors back to the state championship.

“It was a lot of fun. I haven’t scored a touchdown since sophomore year since Spain Park,” Alexander said. “It was a good feeling. He was a good quarterback. Every time he scrambled, he would step up in the pocket, so I kind of slowed my rush down, and Peter just so happened to knock the ball down and it fell in my hands.”

That put the Warriors up 35-3 with 7:33 to play in the third, and it was more than enough, as Hoover scored just one touchdown in the final 35 seconds with Thompson’s second-string defense in the game.

“We give a message to the offense every game, just give us seven,” Woods said. “If you give us seven, we’re going to get the job done. That was our mindset going into the game.”

Alexander added to that, saying the motivation of the regular-season loss played a big role.

“It was a lot of motivation. Losing to Hoover in the regular season just didn’t feel right,” he said. “We all knew the end goal was to beat Hoover and go to a state championship for the fourth time in a row.”

And now, the Warriors will get that opportunity on Wednesday, Dec. 1 against Central-Phenix City at Birmingham’s Protective Stadium.

Freeman said it means a lot after the coaches and players challenged themselves to prove that they were as good as they thought.

“(Tonight) meant a lot. It wasn’t so much about the score of the game, we had some things we need to come and see if we were better or if people thought we were better than we actually were,” Freeman said. “We challenged our kids, you know, we’re going to find out who we are. You win 27 games, and you start anticipating sometimes that you’re going to win instead of being desperate to win. I’m not big on losses, but your mind and your body, you win a bunch of games, and in the back of your mind you think you’re going to find a way to win. That was a challenge. They wanted to get back and see if they were as good as they thought they were.”

Thompson was led by Harrell and Peppins on offense with Harrell finishing 11-12 for 142 yards and four touchdowns, while Peppins had six catches for 121 yards and three touchdowns. Pegues added a 13-yard touchdown reception and 55 yards on the ground.