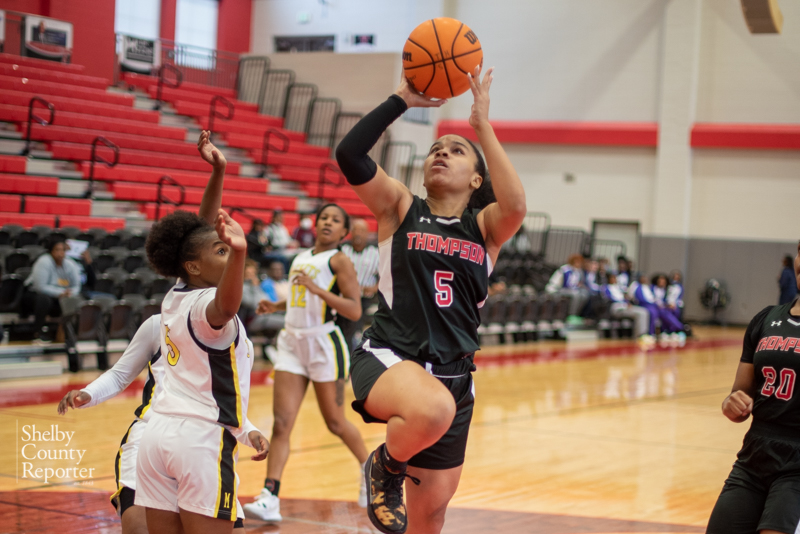 ALABASTER – In what was a tight battle throughout and a two-point game late, the Thompson Warriors were able to edge out Chilton County thanks to four made free throws and a field goal down the stretch during an in-school game on Thursday, Nov. 18.

In the matinee matchup, the Warriors trailed 43-42 earl in the final quarter, but six consecutive free throws down the stretch played a key role in a five-point, 59-54 win.

It completed a comeback effort for Thompson, who trailed 15-11 at the end of the opening quarter.

After taking a 6-3 lead, the Warriors were outscored 12-5 the rest of the period to fall behind by four points in the early going.

Thompson, however, responded in the second quarter, as the two teams flipped the score column.

This time around, it was the Warriors who were able to put together a 15-11 quarter to even the game at 26-26 going into the half.

They hit back-to-back 3-pointers to start the quarter, which pushed them in front by two points. The lead then changed hands three more times with the last lead change eventually giving Chilton County three-point advantage.

Thompson, however, clawed back by making three of four field goals down the stretch to even the score at the half.

After seven more lead changes opened up the second half in a back-and-forth battle, the Warriors were able to go from down a point at 37-36 to up by three in a short period of time.

Back-to-back field goals to end the third quarter pushed Thompson in front 40-37 going to the final quarter of play.

And that’s when the fireworks truly started.

Thompson carried the swing in momentum into the fourth quarter, eventually taking its largest lead of the game at 42-37 on the first made basket of the frame.

Chilton County, however, responded quickly with a 6-0 run to regain the lead once again.

Then came a key stretch.

Thompson hit back to back field goals to take the lead, which led to a timeout by the Tigers.

Out of the timeout, however, the Warriors were able to drain a 3-pointer to stretch the lead to 49-43 with four minutes to play.

Thompson carried a six-point advantage all the way up to 53-47 before Chilton County scored four straight points to cut the deficit to two with about a minute to play.

The Warriors then made two free throws to make it a four-point game, but the Tigers answered with a crucial 3-pointer to cut it back to one.

Thompson, however, put together a clutch play to make a field goal shortly after before then getting the ball back and icing the game with two free throws for the five-point victory.