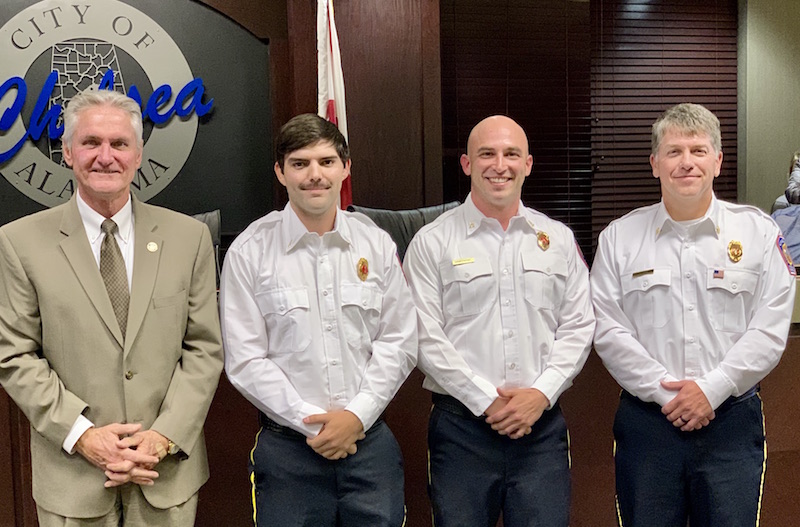 CHELSEA – The Chelsea City Council approved a rezoning request and recognized Chelsea Fire and Rescue employees who were promoted recently at a meeting on Tuesday, Nov. 16.

The City Council’s approval of the rezoning request for 81 acres of property behind the Foothills subdivision came after a public hearing on the matter.

The request, submitted by Laura Chesser, was for the property to be rezoned from A-R (Agricultural-Residential) to PRD (Planned Residential District).

During the hearing, Mayor Tony Picklesimer said the city took into consideration concerns that multiple Foothills residents expressed at a Chelsea Planning Commission meeting about construction traffic coming through their neighborhood, and he announced a temporary construction entrance will be added from the Foothills Business Park to the new neighborhood site during its development.

“We will offer Mr. (David) Brady a temporary construction road easement, and he has accepted the cost of grading the road and putting gravel down,” Picklesimer said. “I personally believe that the addition of a RidgeCrest Homes subdivision behind Foothills subdivision will enhance the value of your homes. I think Mr. Brady and the RidgeCrest Homes people have done everything in their power to be good neighbors and make the inconvenience as small as can be.”

Several residents spoke during the hearing and thanked City Engineer Keith Hager, Brady and others who were involved in working out the construction entrance solution.

“We’ve been very aware of your subdivision and all of the people that live in it,” Picklesimer said. “You’re who we work for and who we represent, and we wanted to do our dead-level best to see our city grow, but not at the expense of others.”

In other business, Fire Chief Joe Lee introduced two of Chelsea Fire and Rescue’s full-time employees who were promoted within the department.

Chase Armstrong was promoted to captain, filling a vacancy left by Capt. Don Williamson when he retired last summer.

Armstrong has been with Chelsea since 2006 and handles the department’s health and wellness program, which means he buys and maintains its PT equipment and creates its workout programs.

This year, Armstrong also has handled the maintenance of Station No. 31, the department’s largest building with the most people.

“He’s done an excellent job with that,” Lee said.

Josh Rossetti was promoted to lieutenant.

“He does a really good job with that,” Lee said, adding Rossetti also maintains the department’s electronic EMS equipment, such as heart monitors and AEDs. “Josh is the one that keeps it maintained and makes sure it’s still working. We’re very proud of them, and congratulations to both of them.”

• Approved a resolution to authorize opening an account with Cadence Bank for the city’s $6 million bond issue for capital improvements to keep these funds separated from all other city funds, as required by law.

• Approved an ordinance to amend Section 6 of the city’s zoning regulations for the B-1 zoning classification increasing the maximum square footage from 2,500 square feet to 12,000 square feet with all other use and regulations to remain the same.

• Approved a resolution for the city to resume responsibility for Park Springs Lane in the Chelsea Park subdivision’s 16th sector now that it is completed.