Bikes 4 Kids ready to give more bikes this Christmas 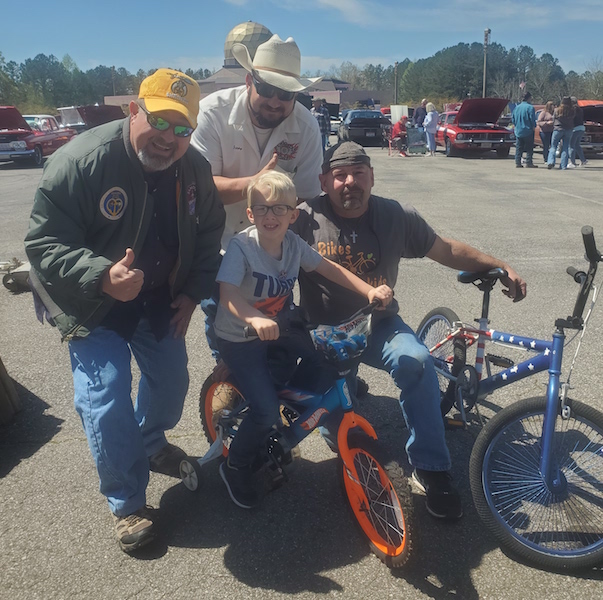 Charlie Bradford, right, and his friend Zac Ingram, back, customize and restore bicycles for children through their non-profit organization, Bikes 4 Kids. Also pictured is P.J. Mullen on his bike and Tim Vaughn. (Contributed)

CHELSEA – Much can happen in a year’s time, and for Chelsea resident Charlie Bradford, the last 12 months have shown how one small project can turn into a long-term mission.

Bradford, the founder of a non-profit called Bikes 4 Kids, was taking the first steps last November with an idea he had of restoring and customizing bicycles for children at Christmas.

Now, Bradford is anticipating an even bigger holiday season for his organization—and a chance to give bikes to many more deserving children.

“We are hard at it,” Bradford said in a November interview. “This year is going to be way bigger than last year.”

“I see this thing growing,” Bradford said. “The need is there, and we’re trying our best to meet the need.”

The idea came to Bradford as he was watching a group of children ride their bikes one afternoon and noticed his friend’s son’s bike had a broken pedal.

“The poor kid was devastated,” Bradford said in a previous interview. “I told him, ‘I could fix your bike. I could weld the pedal back on for you, and it will be good as new.’”

Bradford repaired the bike, but he also took the time to add new details to it.

When he returned the child’s bike to him weeks later, Bradford felt the weight of his good deed.

He called his friend Zac Ingram, who owns Z.I.P.P. Painting in Chelsea, about restoring bikes for more children at no cost to their families, and Ingram said he wanted to help.

Then, they started collecting bikes to restore and spreading the word about what they were doing.

Within several days of forming the group, Bradford said 30 kids had been recommended for receiving bikes.

By the end of the week, the Facebook group had nearly 300 members, and messages were continuing to pour into Bradford’s inbox.

The organization accepts bike and monetary donations, and in addition to the bikes, Bikes 4 Kids is providing clothing and toys for children this Christmas.

“We need kids’ names and ages, and we’ll get them a bike,” Bradford said. “We need to know what everybody wants by Dec. 15.”

Bikes 4 Kids has served children in three counties – Shelby, Chilton and St. Clair – as well as in other states, when a need arises.

For example, Bradford and Ingram custom-built a bike for a young girl in Tampa who had not been able to ride a traditional bike because of her leg braces.

“She is on a mission now, riding her bike without any trouble,” Bradford said. “It says a lot about what we’re capable of.”

Bradford said he is in the process of securing corporate grants to build a facility where kids could come and help to build their bikes.

The building would also house a small version of a BMX track, Bradford said.

“Once we get a facility, we’re going to be able to help a lot of kids,” he said. “We’re already helping hundreds a year. I’m just beside myself with how this thing has turned out.”

In addition to Christmas gifts, Bikes 4 Kids also restores bikes for children’s birthdays and replaces any broken or stolen bikes throughout the year.

Anyone who would like to donate a used or new bike may take it to one of several designated drop zones, including Chelsea Wrecker Service in Chelsea, Miller Tire Shop in Sylacauga, Lighthouse Community Church in Harpersville and Coffee Shoppe in Harpersville.

Bradford said he hopes to help as many families as possible this Christmas as the COVID-19 pandemic continues and people face ongoing financial challenges.

“We’re taking that burden off these families in need to put a little more security back in their life,” Bradford said. “I’ve invested myself and my money to keep it going. Right now, we’re in a position to get money from federal and local grants and corporations to help us in the coming months.”

City of Helena is ready to bring the Christmas…