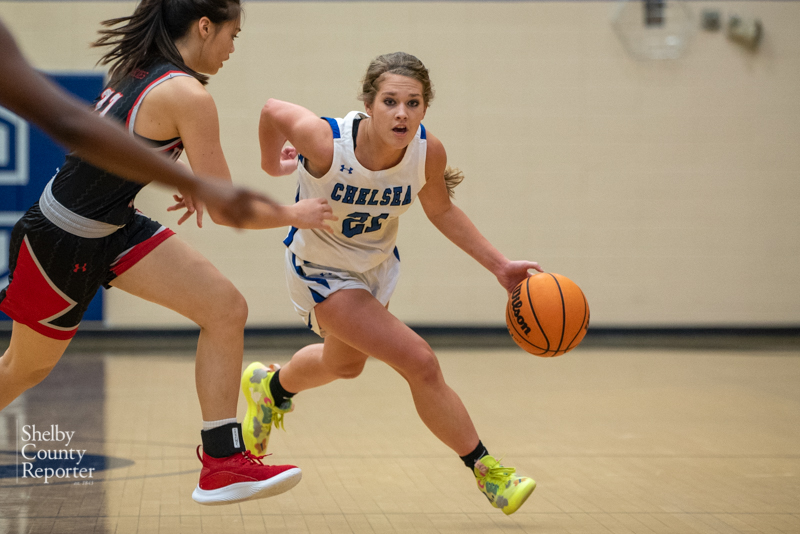 Chelsea’s girls basketball team went 2-1 during Thanksgiving week, earning a spot in the championship of the Hillcrest-Tuscaloosa tournament where the Hornets fell to Vestavia Hills for the second time this season. (File)

TUSCALOOSA – Chelsea’s girls basketball team picked up two more wins on the young season during the week of Thanksgiving, making it to the championship game of the Hillcrest-Tuscaloosa tournament.

The Hornets won their first two games of the tournament by scores of 54-33 against Prattville and 38-37 against host Hillcrest to earn a spot in the championship game against Vestavia Hills—one of the state’s best teams this season.

In the opener, it was all Chelsea, as the Hornets got 16 points each from Sydney Schwallie and Ashley Washington en route to a dominant 21-point victory against Prattville.

The second game of the tournament against the host Patriots was by far the most entertaining of the three games for the Hornets.

A back-and-forth battle began in the opening quarter, as Chelsea jumped out to a 5-0 lead.

The Hornets held that advantage throughout the quarter, never trailing, but the Patriots trimmed a 10-6 deficit down to one point at the end of the first quarter with a 3-pointer at the buzzer to make it 10-9 going to the second.

Chelsea, however, opened the second quarter on a 9-2 run to open the lead back up midway through the quarter.

The Hornets maintained that lead throughout the period, outscoring the Patriots 15-6 to take a 25-15 lead into the halftime break.

The Patriots, however, flipped a switch defensively during the half.

They came out in the second half determined to shut Chelsea’s offense down, and it worked for the majority of the half.

Chelsea scored just five points in the third quarter and was held to single digits in the fourth quarter as well with eight.

Hillcrest, however, couldn’t capitalize in the final quarter.

After outscoring the Hornets 13-5 in the third quarter to draw within two points going to the final quarter, they were held to single digits in the fourth.

In the final seconds, it looked as if the Patriots had locked up the game with a steal to take control with less than 30 seconds to play, but the Hornets got the ball back and Nia Cummings capitalized with the game winner at the buzzer for a 38-37 victory.

Lexi Redd led Chelsea with 14 points in the victory.

In the final game, the Hornets matched up with Vestavia Hills for the second time this season and ran into an undefeated Rebels’ team rolling early in the season.

After losing by 26 in the first matchup between the two teams, this one was slightly closer, but the Hornets couldn’t make up the difference against a talented 7A team, falling 58-35.

Redd again led Chelsea with 12 points in the loss.