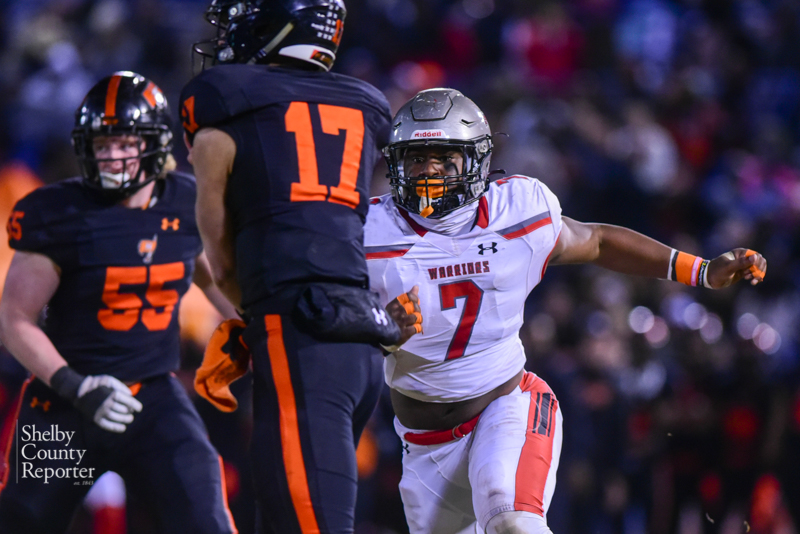 The Thompson Warriors are eyeing a third consecutive state championship, but they'll have to get by undefeated Central-Phenix City tomorrow night in order to get it. (Reporter photo/Keith McCoy)

“How good are we?” The Thompson Warriors asked themselves after a 24-21 loss to Hoover to end the regular season.

They challenged themselves from that point, taking it one week at a time, to prove they were the team they thought they were and others perceived them to be.

The Warriors rolled through the first two rounds of the playoffs and then inflicted revenge with a 35-10 victory against Hoover in the semifinals.

Now, they have one more point to prove. That they are the best team in the state.

They’ll get that chance on Wednesday, Dec. 1 against 13-0 Central-Phenix City.

It marks the third time in the last four years that the two will meet for the Class 7A State Championship. The Red Devils beat Thompson in 2018 in a dominant 52-7 game, but the Warriors came back and got revenge a year later with a 40-14 victory against Central.

Since then, Thompson beat Auburn 29-28 last year in miraculous fashion to win its second championship in a row, and now, the Warriors will take part in their fourth consecutive championship game looking for their third title in a row.

And it really boils down to two things—how bad do they want it and how well do they execute.

There shouldn’t be any lack of motivation for Thompson.

The Warriors were showed up by Hoover in the regular season this year, and it motivated them going into the playoffs.

Well now, they have to continue that drive and will to win. And it shouldn’t take more than looking back to last year’s championship game.

A game they were outplayed in for the most part, Thompson lost starting quarterback Conner Harrell early and fell into a deep hole.

However, the defense flipped a switch in the final quarter, and despite the offense still not producing much without Harrell, that helped make the difference in a game that saw the Warriors score 10 points in the final 30 seconds on a blocked punt returned for a touchdown and a last-second 35-yard field goal from Trevor Hardy.

But if they play like they did in that game again this year, there is a good chance they lose. It was by far one of their most inconsistent performances of last year’s 14-0 season.

So, with a week-and-a-half to prepare, there is no reason that shouldn’t drive them to want to focus better, work harder and be motivated to win a third state championship in a row.

That said, it will take execution on game night to pull this one out against an extremely good Central-Phenix City team.

The Red Devils want revenge of their own after losing this matchup two years ago, and they’re in the midst of a 13-0 season with the state championship the only game standing in the way of a perfect year.

Their lowest offensive output of the season came against Auburn, scoring 21 and 28, but both ended with wins.

A big reason for that is the success of Caleb Nix at the quarterback position, son of Patrick and younger brother to Auburn quarterback Bo Nix.

Caleb is second on the team in rushing with more than 600 yards, while he also has close to 3,000 yards passing and more than 45 combined touchdowns.

Thompson, however, has been even more dominant on both sides of the ball so far.

Even with the 24-21 loss to Hoover, which they just avenged with a 35-10 semifinal win, the Warriors are averaging 46 points per game and giving up 5.9.

The big keys for the Warriors will be the hunger and determination of the defense, the health of Conner Harrell and the want for guys like Ryan Peppins, Justin Pegues and Jaylen Ward to close out their careers making jaw-dropping plays.

If Thompson’s defense plays hungry, and doesn’t walk in too over confident, then it is tough for any team to move the ball against them.

Containing Caleb to the pocket and not letting him buy time will be a top priority for the Warriors, and possibly the biggest key in winning.

Harrell looked good against Hoover despite not being able to make all of his usual throws, but his deep ball, especially rolling to his right, was on point all night.

As for the teammates alongside him, Pegues has been one of the best athletes in the country this year, while Peppins looked like he was on a mission to prove a point last week and Ward has shown he can be the downfield target if needed.

Long-story short, against Hoover in the semifinals, the Warriors executed the game plan to perfection on both sides of the ball.

Now, going up against Central-Phenix, if the execution is there, then they’ll likely win their third title in a row.

That said, it won’t come easy.

There is no question, in my eyes, this is the best team Thompson will have faced this season.

The Red Devils are well coached with Patrick Nix leading the team, and they’re loaded with talent as well.

So whoever wants it more and executes better will win this one.

It’s tough to go against the team that has won two in a row, however, as Central-Phenix has to take the top spot from the Warriors this year. 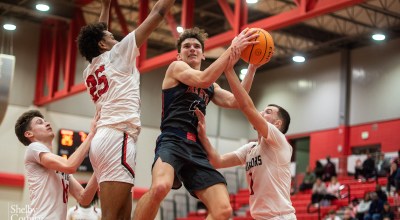 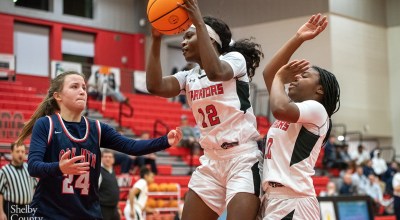