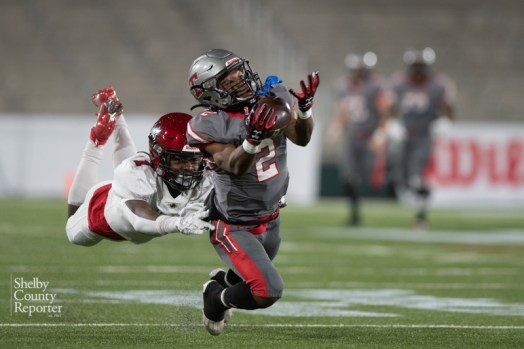 The Thompson Warriors took down Central-Phenix City on Wednesday, Dec. 1 to claim their third state championship in a row. (Reporter photo/Keith McCoy) 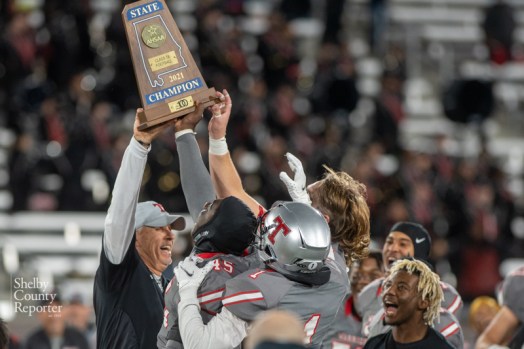 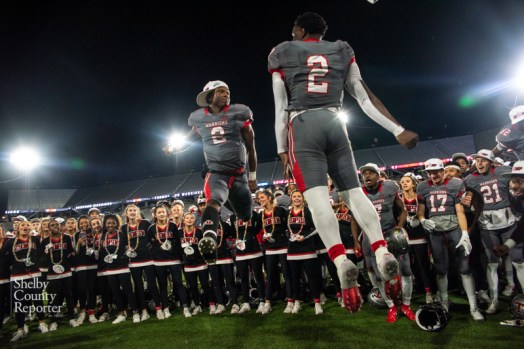 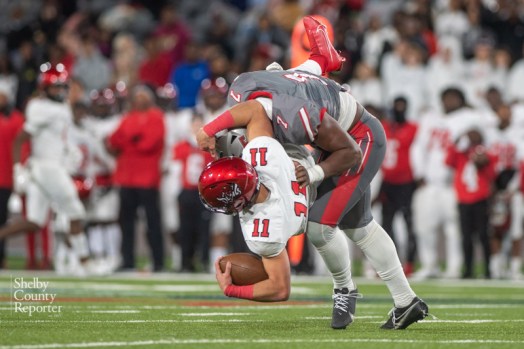 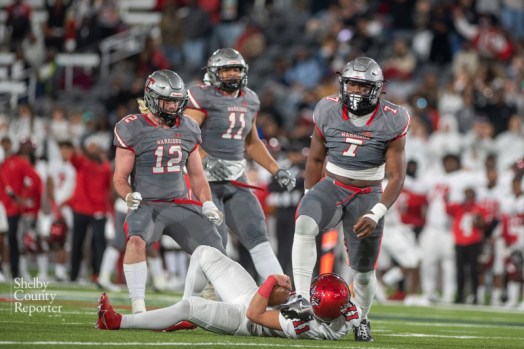 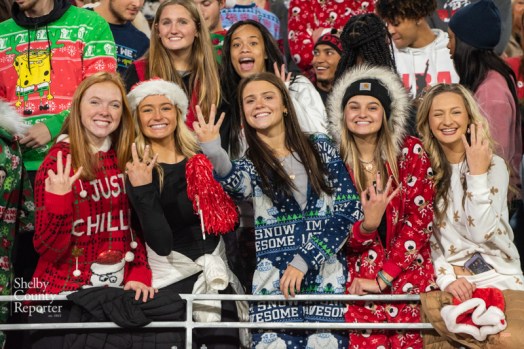 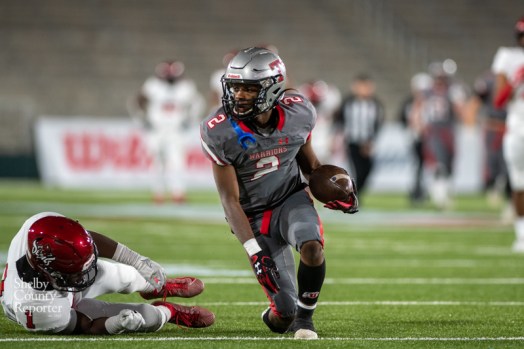 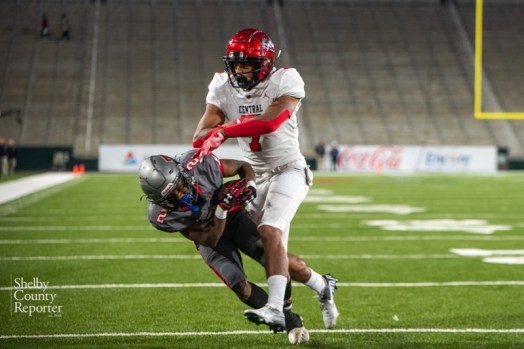 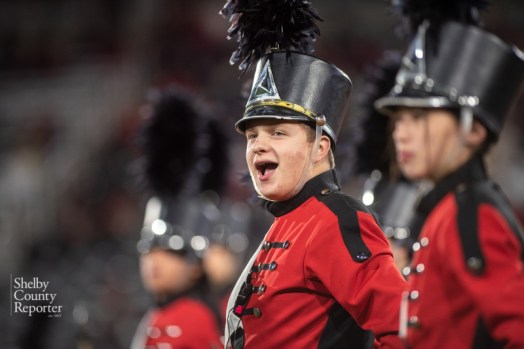 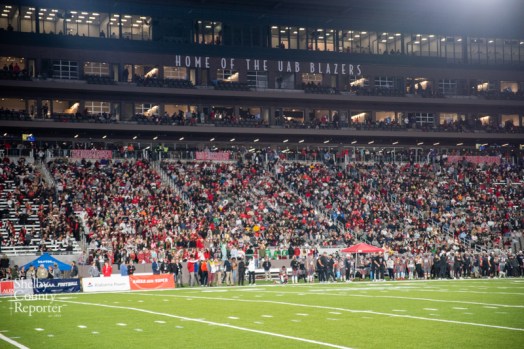 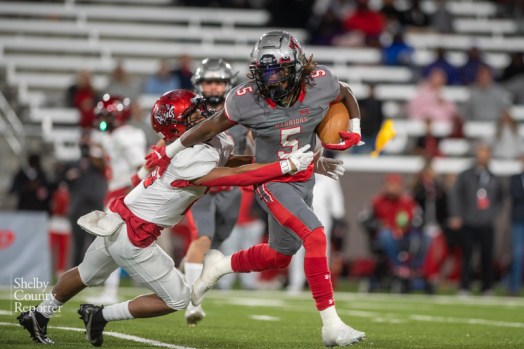 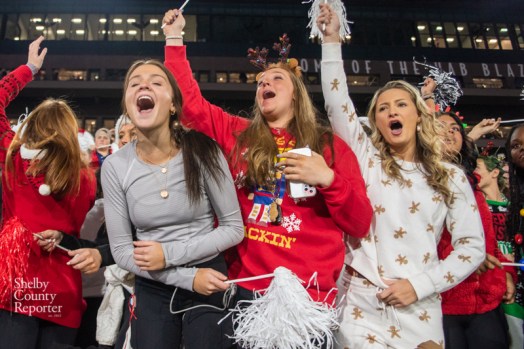 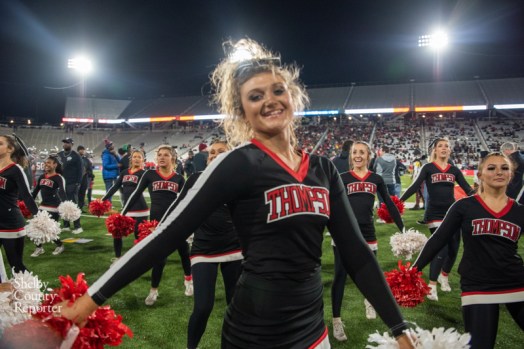 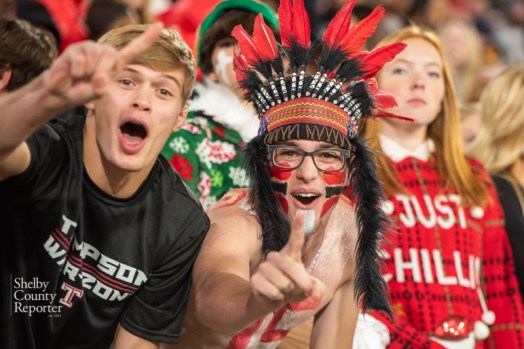 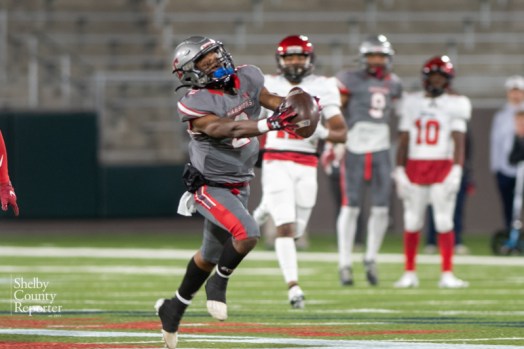 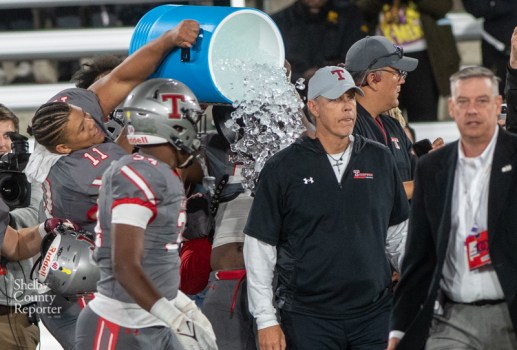 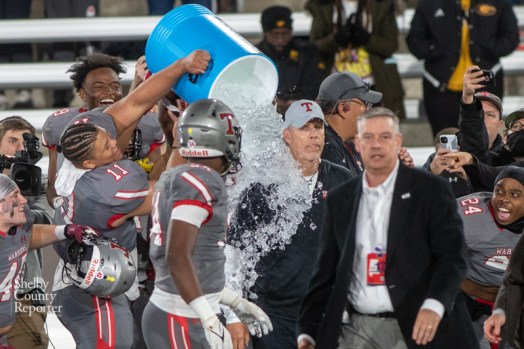 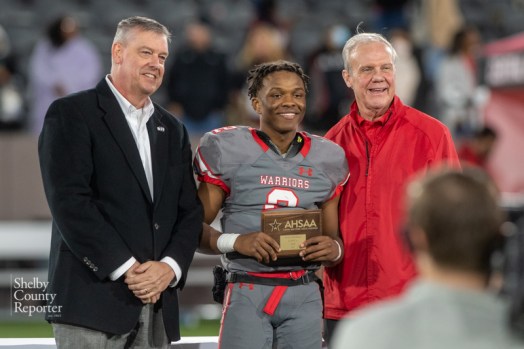 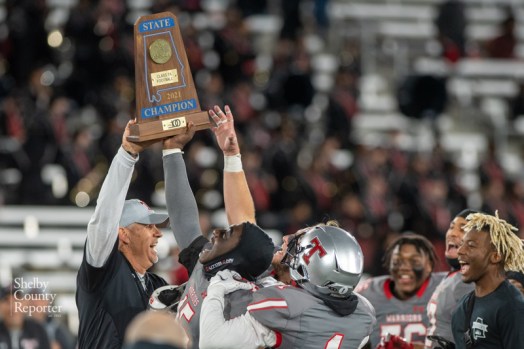 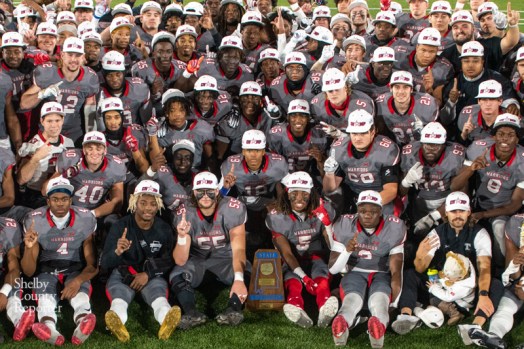 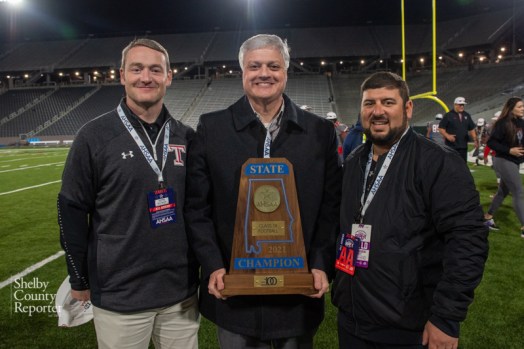 BIRMINGHAM – On the field inside Protective Stadium before the state championship game on Wednesday, Dec. 1, Thompson wide receiver Ryan Peppins looked up in the crowd alongside teammate Jeremiah Alexander and said, “We can’t let the city down.”

Four hours later, the two senior stars held true to their word, leading the Warriors to their third state championship in a row behind a 38-22 win against Central-Phenix City with Peppins earning the Most Valuable Player award.

“Before every game, I always take a peak up to the crowd,” Peppins said. “We just looked at each other and we said, ‘We can’t let the city down.’ From then on, it was game time.”

And game time it was.

The Warriors took a 24-0 lead into the halftime break and never looked back, eventually going up 38-8 before the Red Devils scored two touchdowns in the final minute.

With the win, the Warriors became the first team in Class 7A to three-peat as state champions, and they did so in their backyard.

“It was personal to get here and be the Birmingham team the first year,” head coach Mark Freeman said after the game. “Once we got there, we didn’t want to stop there. We wanted to win the championship in Birmingham.”

In order to accomplish that goal, Freeman made sure his team was focused on desperation going into the game rather than being complacent after two consecutive titles.

And early in the game, they looked like a team that had never tasted the success of a state championship game in the first half.

The Warriors took the field and were relentless on both sides of the ball in the opening two quarters, even with backup quarterback Zach Sims forced back into action early in the game.

On the opening drive, Thompson’s defense forced a quick punt after allowing one first down.

On the last of those passes, however, he went down with a leg injury. After gingerly walking to the locker room, backup Zach Sims stepped in ready to go after gaining experience late in the season for an injured Harrell.

“You didn’t want to see it early. Conner out there laying on the field,” Freeman said. “I go back to this, and I’m not beating a dead horse, but I told the guys all week that God prepared us for a battle. I didn’t know what it would be, but we found out quick.”

Sims, however, had the experience after starting two playoff games earlier in the postseason and playing the second half against Hoover.

On his first pass, Sims hit Deuce Oliver for a 24-yard touchdown pass to give the Warriors a 7-0 advantage with 5:28 to play in the quarter.

And from there, Thompson was off and rolling.

Following a three-and-out from the defense, Thompson’s offense came right back on the field and went on a six-play, 49-yard scoring drive.

Sims hit passes of 20 yards and 7 yards, with a 10-yard run added in from Justin Pegues, before Sims then hit Pegues for a 26-yard touchdown pass to put the Warriors on top 14-0 late in the opening quarter.

“We look back at when Conner got hurt in the Hoover game, and Zach came in and played a whole half and a game and a half after that. That experience tonight, he came in here and gave us a 14-point lead,” Freeman said. “When we put him in right there, we were totally confident. He’s a 10th grader playing a state championship game against a really good football team. That kid is so loveable that you’re happy for him.”

The next three possessions came and went with three combined turnovers—an interception from Thompson’s defense, a fumble by the Warriors and then a fumble by the Red Devils.

Thompson capitalized on the final of those turnovers with Harrell returning to the game and leading a nine-play drive that eventually put the Warriors in field goal range.

Trevor Hardy, the hero of last year’s championship game, came up big again with a 37-yard field goal to make it 17-0 with 5:17 left in the half.

“It was definitely tough last year, getting hurt and not being able to finish the game,” Harrell said. “I felt like I was letting my team down because it was a helpless feeling. Anything I could do this game to get back in and help my team win, I was going to do.”

Central eventually faced third-and-15 on the ensuing drive looking to make a big play and start a comeback late in the half.

Instead, Jeremiah Alexander came up with an 18-yard sack that forced another punt from the Red Devils.

And the offense continued to benefit from the success of the defense.

This time around, the Warriors didn’t waste any time.

On the first play, Harrell hit Peppins for 47 yards to set up the Warriors on the Central 13-yard line. Two plays later, he found Peppins again for a 6-yard touchdown pass to make it 24-0 going into the half.

Out of the half, however, it was a different story in the third quarter.

Thompson went three-and-out on all three of its third-quarter drives, while the Red Devils found the end zone for the first time.

After the first three-and-out from the Warriors, Central put together a 12-play, 75-yard drive capped off by a 9-yard touchdown pass from Caleb Nix to leading receiver Karmello English.

He then hit Caleb Johnson for a 2-point conversion to make it 24-8, which held up going to the final quarter.

At that point, the Warriors got back to their bread and butter.

“We weren’t able to run the ball really well,” Freeman said. “You want to be smart and have football sense, but at the end of the day, that’s not who we really are. And when it wasn’t working, that gave me a really good excuse to get us back in dime personnel, empty sets, and do what I felt like we could find some matchups with. We fell back on that and took advantage of it.”

The first touchdown came with 10:41 left in the final quarter after Harrell hit Jaylen Ward and Bo Jones for gains of 38 and 32 yards. One play later, Harrell toted the ball in for a 3-yard rushing touchdown.

One drive after that short four-play drive, Harrell hit Peppins for a 73-yard touchdown on the second play to make it 38-8 with 6:28 to play.

The Red Devils added two more late scores, but it was too little too late at that point.

Pegues added two catches for 32 yards with a touchdown and 15 rushes for 54 yards.

Defensively, Tre’Quon Fegans led the way with seven tackles, an interception and two pass breakups. Peter Woods added six tackles, one sack and one tackle for loss, while Anquon Fegans also had an interception. 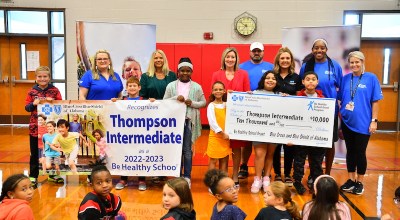