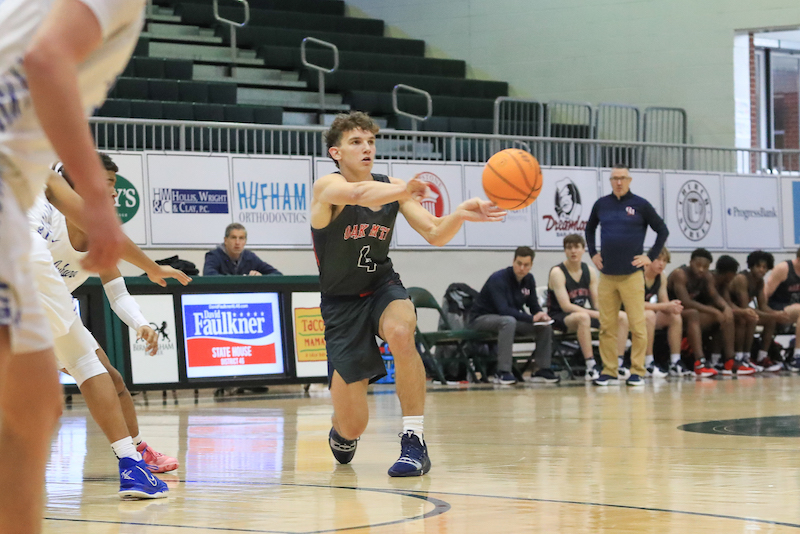 Oak Mountain edged Helena on the road on Dec. 2 in a tight 52-50 victory that came down to the final seconds. (File)

HELENA – The Oak Mountain Eagles notched another win early in the season on Thursday night, Dec. 2 in a tight 52-50 win against county foe Helena.

Points were at a premium in the first quarter, but Oak Mountain overcame seven fouls in the period to jump out to a 10-6 lead at the end of the first.

The Eagles maintained their lead in the early part of the second behind a couple scores from guard Wilder Evers. Jacob Satterfield’s hot hand threatened to give Helena the lead, but Evan Smith helped boost the Eagles and secure a four-point lead going into halftime.

Ian Johnigan hit a pair of threes to open the second half for Helena, but Oak Mountain kept pace.

That, however, didn’t prevent Helena from briefly taking the lead late in the third before Oak Mountain snatched it back by one point going to the fourth quarter.

The Eagles responded to the pressure well with an early run in the final period to go up seven.

The Huskies cut the lead to two with just under a minute left, and down 48-46, Helena was forced to foul on multiple Oak Mountain possessions to try and get the ball back quickly.

Charlie Marshall drove and hit a layup with 13 seconds left and got the Huskies back within two. After an ensuing timeout, Oak Mountain lost the ball on the in-bounds pass and gave it back to Helena with nine seconds to go.

The Huskies couldn’t take advantage of the free possession and fumbled the ball around before losing possession and having to foul. Brady Dunn then iced the game at the free throw line by increasing the lead to four, and after the Eagles gave Helena a free basket at the end, Oak Mountain closed out a tight 52-50 battle.

Dunn led the way in scoring for the Eagles, scoring 14 points, while Evers scored 13. Smith finished with nine in his first action of the season.

Johnigan led Helena with 16 points and was the only Husky in double figures, with Josh Williams and Satterfield coming close with nine points each.