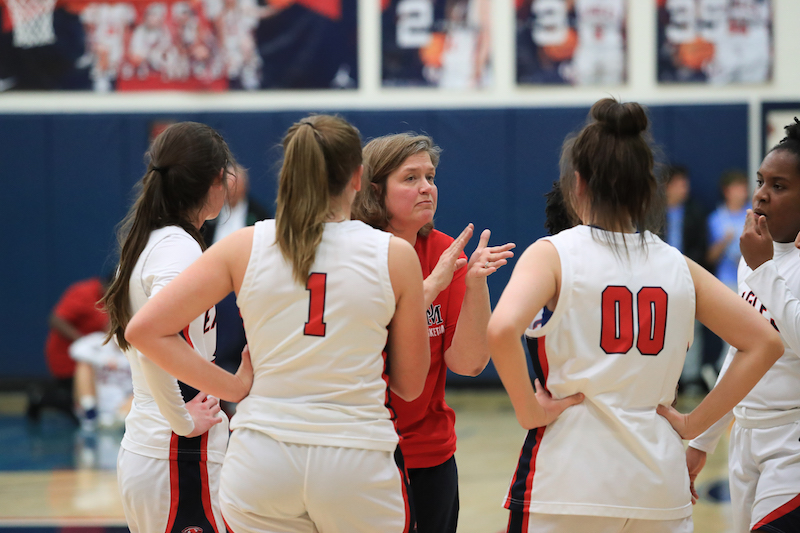 HELENA – A strong third-quarter run helped the Oak Mountain Eagles pull away from the Helena Huskies for a 41-29 victory in a county battle on Thursday, Dec. 1 at Helena High School.

Helena jumped out to an early lead behind a Sophia Merchant three, but Oak Mountain closed the gap with free throws and took its first lead of the game late in the first quarter thanks to strong post play.

The two sides came out firing in the second quarter, trading threes before Oak Mountain widened its lead to 20-12 and forced an early Helena timeout to stop the momentum. Neither side could find the bottom of the net much after that, and the Eagles took a 23-14 lead into the locker room.

The Eagles then took over in the third quarter, going on a 12-2 run that helped them open a 19-point advantage.

Helena crawled back into the game in the fourth, taking advantage of Oak Mountain turnovers and cutting the lead to 12 with less than four minutes to go.

However, that was as close as the Huskies got.

The Oak Mountain defense held strong from there to help the Eagles close out the 41-29 win on the road.

Mallory Rhodes led the Huskies in scoring with eight points and Olivia Johnigan added five points late in the game.

The Huskies drop to 2-5 on the season with the loss against the Eagles. Helena is back in action tomorrow at home for the first of two straight games against the Chelsea Hornets.