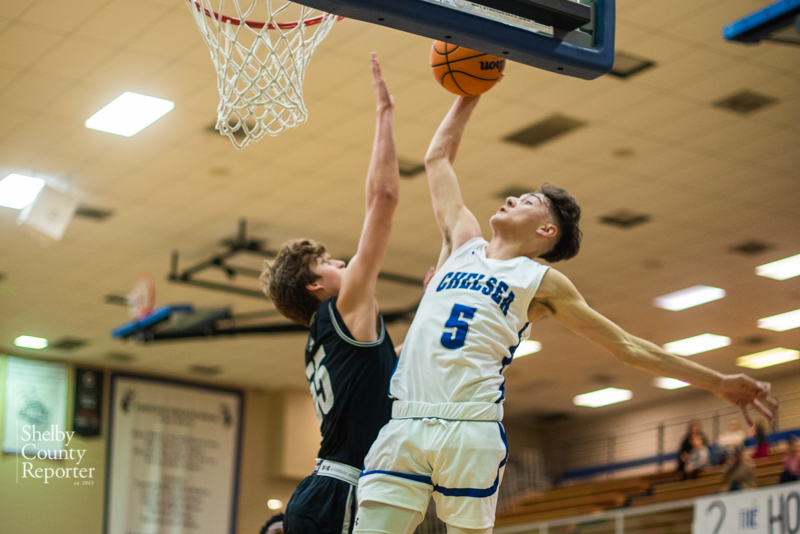 Chelsea’s boys picked up a thrilling overtime victory against Helena on Friday, Dec. 3, while the girls used impressive defense to pick up a 12-point victory against the Huskies. (File)

HELENA – Tied 48-48 going into overtime in a road matchup with the Helena Huskies in county rivalry, the Chelsea Hornets’ boys basketball team had a big 10-second stretch.

After making a basket, Patrick Lanzi notched a steal before his missed layup was cleaned up with an offensive put back from Aiden Owens. Then, another steal from Carson Camper on a pass just after the ensuing inbounds pass led to another layup and a 6-0 run.

That was all part of a 7-1 run to start the overtime period, and every point of it was needed, as the Hornets held on from there to pick up a thrilling 56-55 victory in the extra period.

Helena snatched the advantage going into the halftime break, but only by two points, as the Huskies outscored Chelsea 14-12 in the second quarter to make the score at the half 20-18.

With both defenses playing well, it kept the two teams from being able to sustain runs—something that continued in the third quarter as neither team ever outscored the other by more than two points in any period of the game.

In the third period, the Hornets outscored Helena 13-12, but they still went to the final quarter down by one with the Huskies in front 32-31.

And while defense had dominated the game going to the final quarter, both turned to their offense to try and make the difference late, which led to a compelling final quarter.

The two teams combined for 33 points in the frame, seven more than any other quarter of the game.

Helena actually looked to be pulling away at one point, jumping out to a 42-34 lead, but the Hornets ended the period on a 14-6 run to do just enough to come back and force overtime.

That led to the thrilling overtime period that saw Chelsea jump out to a 55-49 lead before holding off the Huskies for the one-point victory.

Chelsea was led by three in double figures. Lanzi led the way with 18, while Avery Futch had 14 and Camper posted 13.

All of that excitement followed a girls game that was also won by the Hornets, but it was a matchup Chelsea had to fend off a Helena comeback.

Chelsea took a 13-0 lead in the game at the end of the opening quarter, but Helena battled back with its best quarter of the game in the second period.

The Huskies put up 11 points and limited Chelsea to eight points, which trimmed the deficit to 21-11 going into the halftime break.

After a slow start defensively in the opening quarter, Helena’s defense held Chelsea to single digits the rest of the game, but the Huskies never could get the offense going against one of the state’s best defenses.

The Hornets only scored nine more in the third quarter, but their defense limited Helena to six points en route to extending the lead to 30-17 going to the final quarter.

Helena again limited Chelsea to nine points, but the Hornets held strong defensively by giving up 10 points, which allowed the Hornets to pull off a 12-point, 39-27 victory.