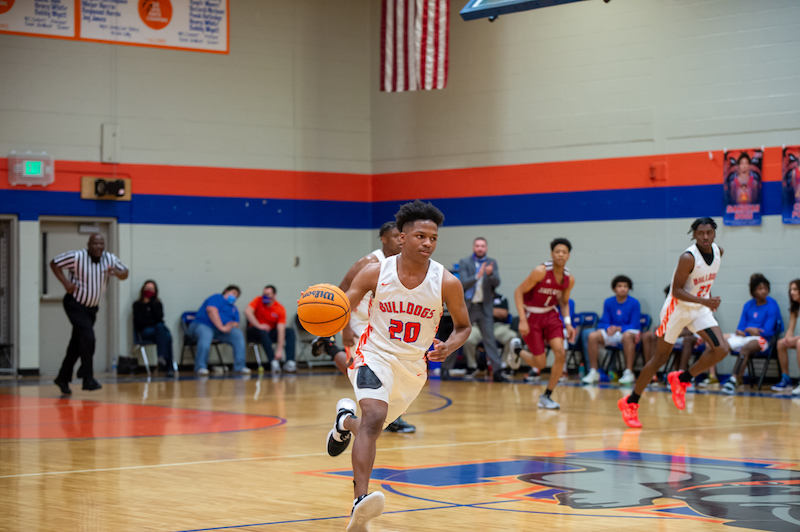 COLUMBIANA – It was a big night for the Montevallo boys and girls basketball programs on Friday, Dec. 3, as both teams put together inspiring defensive efforts en route to wins against rival Shelby County.

In the boys game, the Bulldogs held the Wildcats to single digits in two of the four quarters, leading to a 51-41 win at the end of the night, while the girls held Shelby County to single digits in every quarter on the way to a dominant 45-17 victory.

For the girls, it was impressive from start to finish, as the Bulldogs never gave up more than six points in any quarter of the game.

That combined with a fast start was more than enough to pick up the win.

In the opening quarter, Montevallo put together its best offensive quarter of the game with 17 points.

That quickly helped the Bulldogs open up a double-digit lead after giving up six points in the quarter, and it never got any closer the rest of the way.

With momentum on Montevallo’s side, the Bulldogs used that to their advantage and put together a remarkable defensive effort in the second quarter.

They gave up just two points, while the offense almost matched its first-quarter performance, scoring 15 to extend their lead to 32-8 going into the half.

That was more than enough separation with the way Montevallo was playing defensively.

The Bulldogs scored just a combined 13 points in the second half, but their defense gave up a combined nine, limiting the Wildcats to three in the third and six in the fourth to pull away for the 45-17 win.

Montevallo’s boys also needed the defense to step up in a big way to help pick up a win.

But early in the game, Shelby County was able to match the intensity of the Bulldogs.

The Wildcats put together their second best offensive quarter of the game in the opening quarter, posting 13 points, which was good enough for a one-point lead at the end of one.

The rest of the game, however, became about consistency offensively, and it was something the Bulldogs handled well.

Montevallo made adjustments defensively going into the second quarter and it paid off.

The Bulldogs posted 11 points as part of a consistent offensive night that saw them score in double figures in every quarter, while their defense hounded Shelby County’s offense, limiting the Wildcats to three points.

That helped Montevallo quickly overcome a one-point deficit by taking a 23-16 lead into the half.

At that point, it was still a very tight game, but Montevallo started to create some separation in the third quarter with a similar effort.

The Bulldogs again performed well defensively, giving up eight points in the quarter, while their offense totaled 14 points for the first of two consecutive quarters.

That allowed Montevallo to extend its lead to 37-24 going into the final quarter of play.

Shelby County, however, had no quit, something that has become a theme for the Wildcats late in games this season.

They overcame two sluggish quarters offensively with adjustments in the final quarter, which led to the best quarter of the game from either team on the offensive end with 17 points.

But Montevallo’s 14 points for the second quarter in a row allowed the Bulldogs to remain in front throughout and pick up the 10-point win.

The victory gave Montevallo its second win in a row.

Shelby County got 11 points from Damien Portis and 10 from Jon Michael Gay in the comeback effort.