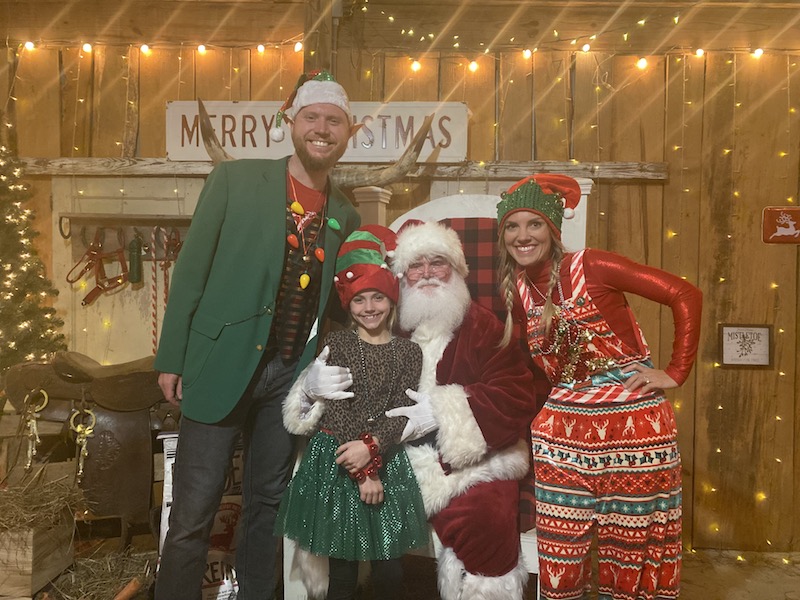 HELENA – Helena families gathered outside the gates of Helena Hollow on Sunday, Dec. 5 in gleeful anticipation of the farm’s Supper with Santa event. At 5:45 p.m., there was a line of people that coursed down a considerable length of the farm.

Amy Griffin owns the farm with her husband Jamie, and she said this is business as usual for the event.

“Everyone is really good about following the schedule,” she said. “They know to get here at 5:45 and they know we open the gates promptly at 6.”

As Jamie opened the gate, families were directed to their assigned area of the Supper with Santa festivities. The evening is divided up into separate stations: crafting time, playtime by the corn pit, hayrides through the farm and the namesake of supper with Santa. After collecting their glow-in-the-dark “Santa dust,” elf doughnuts and reindeer feed, families can roast s’mores over an open flame or toss basketballs at hoops.

When families purchase tickets, they are assigned to either supper one, two or three, and the number dictates the schedule of the evening.

“Each group is assigned an elf tour guide,” Griffin explained. “When it gets close to the time they need to switch to another activity, the elf will alert everyone in the group that soon they’ll be heading to their next station.”

In the night’s darkness, the farm is illuminated by flashing Christmas lights that are synced to do a light show based on the local radio station. The 2018 version of “The Grinch” is playing on the big screen as families walk to and from their stations, and children and parents alike were ecstatic at the snow machine that truly made it feel like you were at the North Pole.

The dinner took place in the Hollow’s party barn, and was catered by Champy’s Fried Chicken. Griffin said they try to always have food from a local restaurant that parents and children can both enjoy.

As families ate, Santa and Mrs. Claus took photos with children and listened to their Christmas wish lists. There wasn’t a single child void of a smile miles around.

The event has always been a hit for Helena Hollow. According to Griffin, they sold out of tickets within ten minutes the first year they held the event.

Remaining dates for Supper with Santa are:

For more information about Helena Hollow or to purchase tickets for Supper with Santa, visit their website at Helenahollow.com.