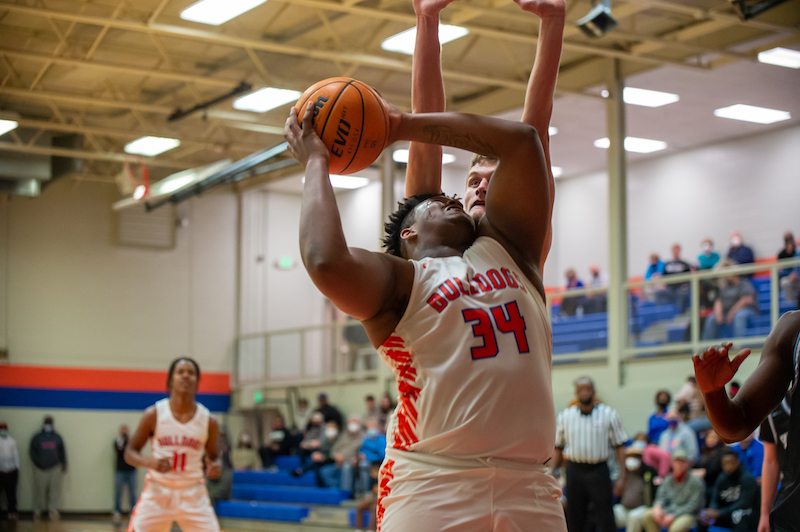 MONTEVALLO – The Montevallo Bulldogs showed a ton of character and heart at home as they overcame a big early deficit with great effort and defense to defeat the Prattville Christian Panthers Monday, Dec. 7 by a score of 55-49.

After two close losses to begin the season, the Bulldogs are now riding a three-game win streak to take their record to 3-2. After the game, head coach Tyler Blackwell beamed about his team’s play in a tight game down the stretch.

“It just speaks on behalf of our leaders,” Blackwell said. “We’ve got some guys that have played a couple years of varsity basketball and they’re leading us right now. They’re taking it on their shoulders, they’re doing everything by example and they’re doing it the right way. I couldn’t ask for a better group that’s playing the right way with energy and effort.”

The Bulldogs got a rude awakening at the beginning of the game as Prattville Christian drilled three shots from long range right off the bat. Blackwell calmly called a timeout and spoke with his guys.

“I just reminded the guys of what we talked about in the pregame,” he  said. “When you mess up on defense, this team makes you pay and I thought our guys weren’t all the way mentally locked in. I thought they did a great job of locking in in the second quarter and down the stretch. When we’re locked in, we do a really, really good job.”

From there, Montevallo ratcheted up the intensity and forced four straight turnovers sparking a 10-2 run to end the first quarter. Overall, the Bulldogs stretched that run to 15-2 and forced nine turnovers in the half to change the feel of the game completely.

Kial Cottingham scored a 3-pointer and had a three-point play in the run with Jaydien Rutledge adding two baskets as well.

Blackwell found a good matchup with center Dylan Campbell on offense and got buckets from seven of his players as Montevallo found themselves down 26-24 at halftime.

In the third quarter, Campbell continued to exploit his matchup in the post and couldn’t be stopped from getting position down low.

He scored five more in the quarter and got to the free throw line on three separate occasions as the Bulldogs and Panthers went back-and-forth.

“He’s another one of our guys who’s played three or four years at the varsity level and he does whatever we ask him to do night in and night out,” Blackwell said of Campbell. “Tonight was one of those nights he had a match up and finished around the rim. Just a privilege to coach him on a night in, night out basis.”

The Bulldogs saved their best for last as they entered the fourth quarter down three. Contributions again came from across the roster as Campbell scored nine of his game-high 17 points with Cottingham and Rutledge adding nine more between them.

None more impressive than when Campbell missed two late free throws, but charged in, grabbed his own rebound and powered up for another layup in the paint to put the game away.

The Bulldogs forced six more turnovers in the final period and 19 for the game as they rattled the Panthers’ initial confidence and allowed just four more three pointers the rest of the game. Campbell’s 17 and 9 rebounds led Montevallo with Cottingham netting 15 and 12 coming from Rutledge.