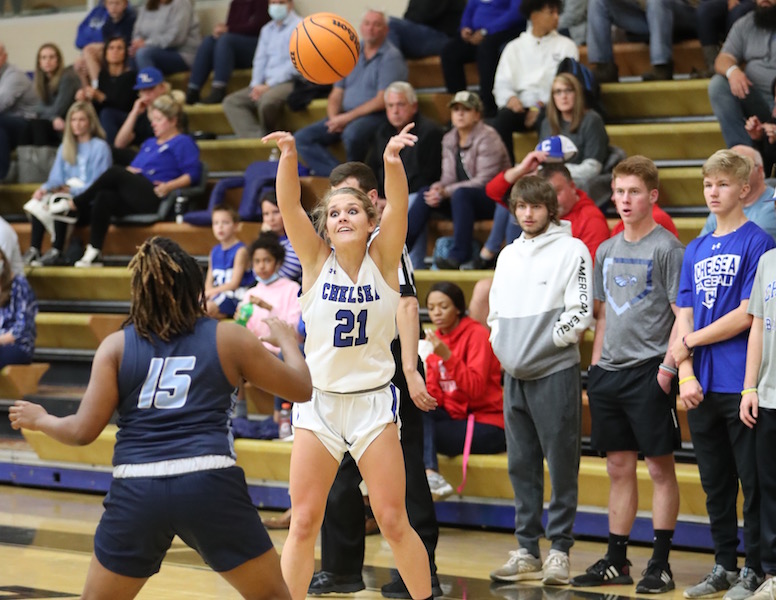 Sydney Schwallie scored 13 of Chelsea's 30 points in a one-point win against Helena on Tuesday, Dec. 7. (File)

The Hornets controlled the game early, jumping out to an 8-4 lead at the end of the first quarter and followed that up with a dominant second quarter, shutting out the Huskies until three minutes to go in the half.

With the Hornets up 12-4 at that point, Helena hit a 3-pointer to cut the lead to five.

A Lexi Redd buzzer-beating three, however, secured a 17-7 lead for Chelsea going into the locker room.

Faced with a double-digit deficit, Helena made adjustments defensively in the second half, which paid off.

Helena outscored Chelsea 22-13 in the second half.

A Kennedi Nobles 3-pointer opened the half for the Huskies, but the scoring pace didn’t pick up until about midway through the quarter.

Helena went on a 5-1 run in the quarter to cut the deficit to five at 23-18 going to the final period.

Perhaps sensing an opportunity, Helena tried to shoot more quick shots from behind the arc, with mixed results. It would take a balanced attack of deep shots, post play, and free throws to cut the lead down to one.

Chelsea moved into a more aggressive defense from that point, but it wasn’t enough to stop Helena from taking the lead off a 3–pointer right at the four-minute mark.

The rest of the game was a back-and-forth affair.

A timeout taken with 1:39 left and a one-point Chelsea lead set up a wild finish. Out of the timeout, back-to-back jump balls were called, the last one seemingly a strategic play by Chelsea to get the ball back easily by utilizing the possession arrow that was in favor of the Hornets.

The Huskies got the ball with less than 10 seconds left, but after a promising drive inside, Helena lost the ball and was forced to foul.

Chelsea then iced the game by rebounding a missed free throw with a one-point lead to close out the 30-29 lead.

Sydney Schwallie led the Hornets in scoring with 13 points, while Nobles had 15 points for the Huskies, all of which came from 3-pointers.