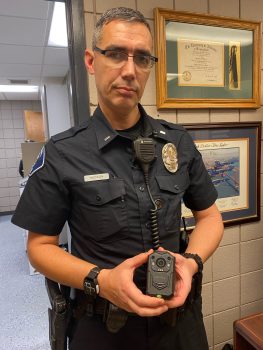 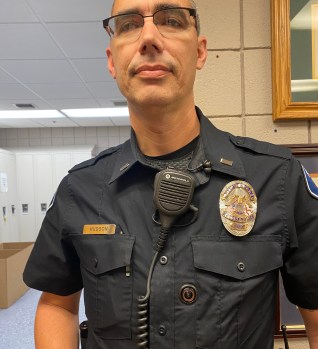 “This is a very state of the art system that provides us with not only outstanding video and audio recording from body cams and vehicles, but also provides layers of officer safety that no other system on the market can do, and I believe it will serve our community and our officers very well,” Flynn said.

The new body camera system differs from the previous system in many ways.

The server is another revolutionary aspect of the technology. It’s not only easily accessible, it keeps video organized based on category. Video is logged based on the nature of the crime, for example DUIs or traffic violations. The officer logs the video according to its specific category and the video is then stored on the server for however long the statute is of that crime.

Lieutenant Charles Hudson modeled the technology and demonstrated several of its new features. The BodyWorn technology, for example, has a new feature that detects when an officer is down and alerts surrounding officers to their situation. The feature can not only save the lives of officers, though.

“There was an instance with a department where they started using the BodyWorn technology, and one night an officer was pulled over to the side of the road by someone waving,” said Lindsey. “It ended up being a distressed parent whose toddler had stopped breathing and they didn’t know what to do. So, the officer got down on the ground and started to administer CPR and the alert started to go off that an officer was down. Instead of standing up and correcting it, he realized he could use the alert to bring help, and that’s exactly what happened.”

Hudson also demonstrated how the technology connects to the officer’s gun holster. The second a gun is unholstered, the technology records when and how long the gun remains out of its holster and logs it into the system.

“It makes a mark in the video that records exactly what time during the recording the gun was unholstered,” Hudson said. “That way if anyone tried to claim, ‘Oh, he had his gun out the whole time and was pointing it at me,’ we can say, ‘Actually, it was out for 12 seconds or however long,’ and it is 100 percent precise.”

Helena is the first police department in the state of Alabama to use this technology, and Lindsey said it will no doubt save countless lives.

“Yes, this helps keep us safe, but this is really to make sure everyone is safe,” Lindsey said.

Flynn made special mention of the gratitude to Helena’s mayor Brian Puckett and to the Helena City Council for making the transition to BodyWorn possible.

“We are very, very grateful to the mayor and the Helena City Council for approving this in the city budget,” Flynn said. “You know, there are departments out there that don’t want to spend the money on something like this, but how do you put a cost on human life?”