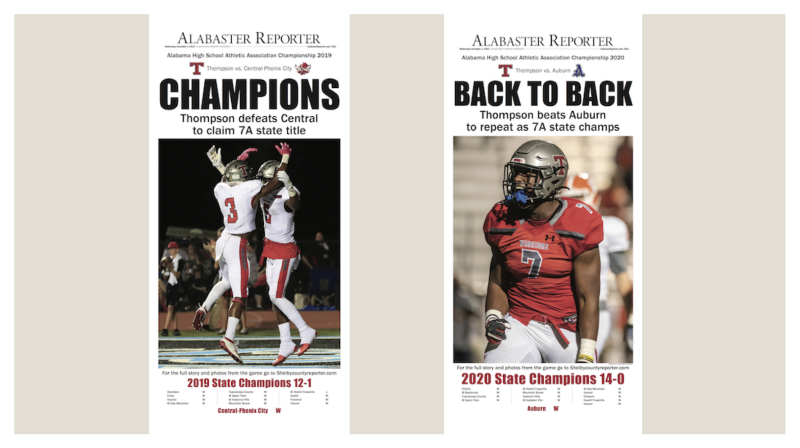 They absolutely did the right thing by allowing a 2020-2021 sports season to take place, and they deserved kudos for not only making the gutsy call, but pulling it off with very few hiccups.

But change comes with time, and this year, I have the same right to question a decision as much as I had the right to build up the AHSAA last year.

And it’s important to note up front, this is more than just local sports coverage, it’s the principal of local journalism having a voice and not being controlled.

For the fourth year in a row, the Thompson Warriors advanced to the Class 7A State Championship game on Wednesday, Dec. 1.

It is a truly special moment whenever any team has a chance to play for a state championship, but this one, it felt even more special with the Warriors looking to bring home their third state title in a row.

As we had done the previous three years as a paper, we planned a special handout edition to celebrate the team should the walk away with the win, which they ultimately did.

Three years ago, we were forced to throw them in a dumpster on the way home from a loss to Central-Phenix City, but the two years after, we got the pleasure of distributing them on the field to fans, players and coaches to celebrate their hard work, dedication and accomplishments.

It became one of my favorite pieces to work on and distribute each year.

It was one of those moments where you feel like your job is making a difference and helping create memories that will last a lifetime.

Well, at the end of the 2020 state championship game, mind you it was one of the most chaotic finishes to any football game ever, I am in the middle of writing my story when my photographer and I were very firmly told it can’t happen again, at least not without permission first.

We did what we were asked, however, and sought permission as soon as Thompson won its semifinal game against Hoover to earn a historic fourth championship berth in a row.

We were met with the response that it is against AHSAA policy.

It was obviously a huge disappointment to us, but even more important, it was a disappointment to the city of Alabaster and all of the Thompson coaches, players and fans who were hoping to have them on the field once again to celebrate a historic moment after winning their third state championship in a row—the first time that has happened in Class 7A.

The only two reasons we have been given as to why it can’t be done are the policy and because it could hurt the feelings of the runner-up team.

The same second-place team that is given runner-up merchandise with the AHSAA logo plastered on it and then forced to watch as the championship-winning team celebrates in the middle of the field with the trophy.

The policy part is a much better argument. You can’t make an exception for one news organization and not others. But therein lies the problem.

No matter who wins, that team’s local paper should have a chance to help them celebrate like they just won a national championship or the Super Bowl, because it is such a big deal.

Sometimes, polices and rules are meant to be changed for the better good of who you represent, which in this case would be the players and coaches.

Next year, we challenge the AHSAA to change course and try not to govern a news organization so strictly so that the players can celebrate properly, even if one of Shelby County’s teams isn’t there.

Regardless, we will have a plan in place on game night to distribute them somewhere because administrators, coaches, players, parents and fans asked many times about them, and we can’t let them down again.

I am proud that we have our special commemorative insert in this week’s paper to celebrate the win, but there is nothing like having the paper in hand on the field right after the biggest win of your life.