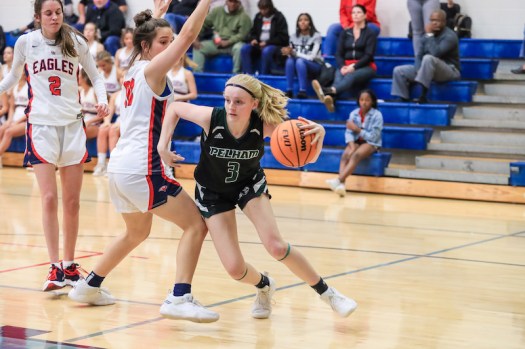 It took overtime, but the Pelham Panthers remained unbeaten on the season with a hard-fought win against Oak Mountain on Dec. 7. (For the Reporter/Dawn Harrison) 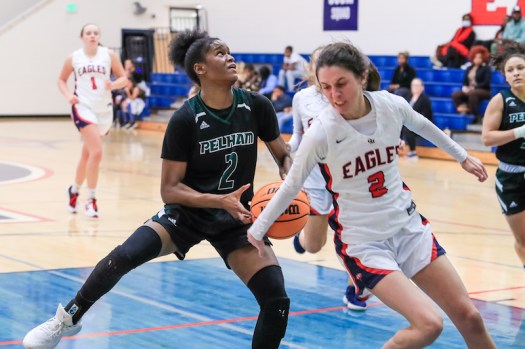 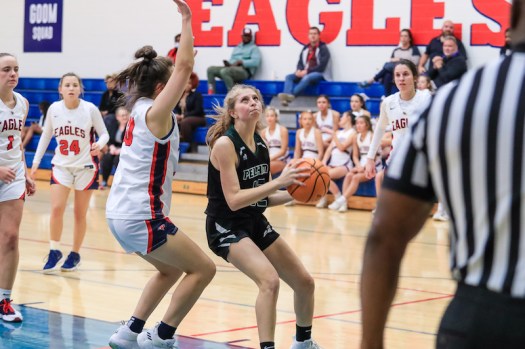 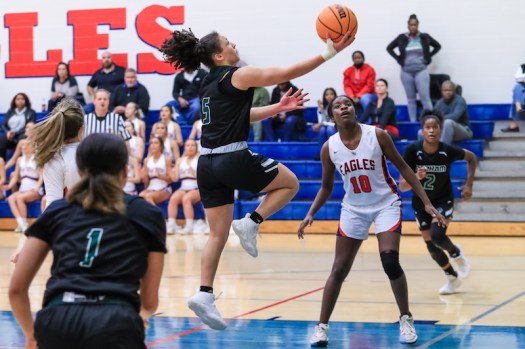 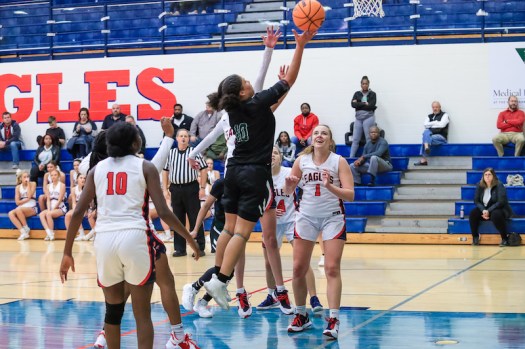 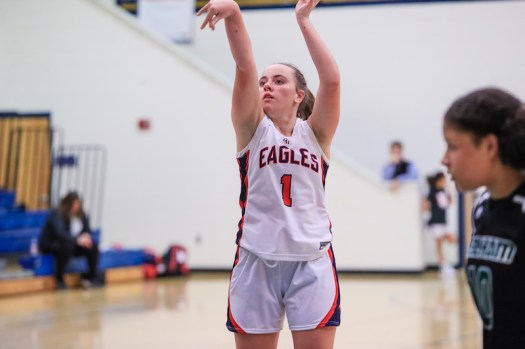 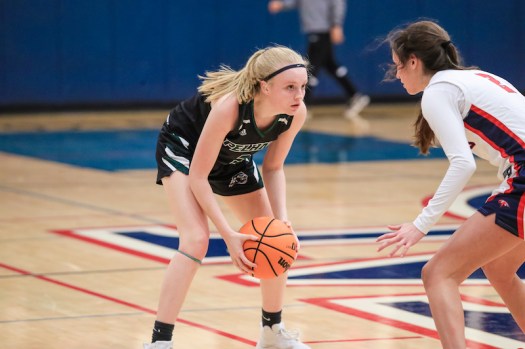 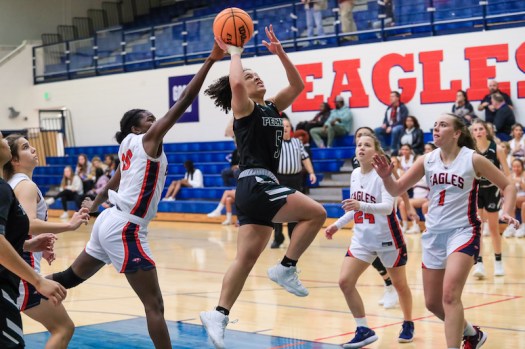 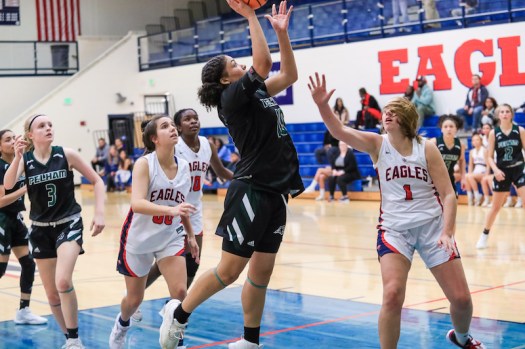 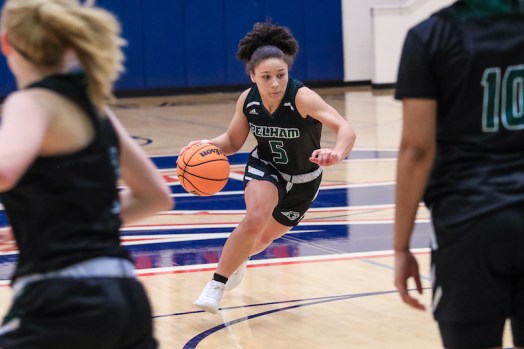 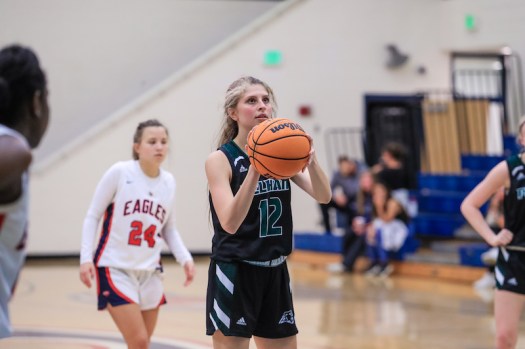 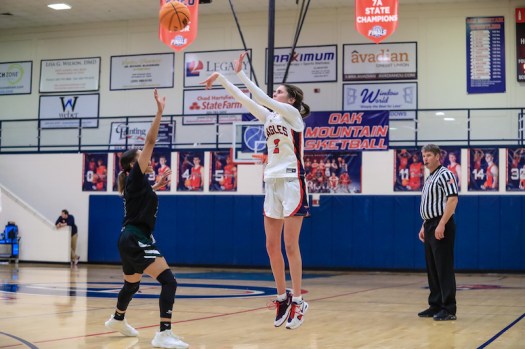 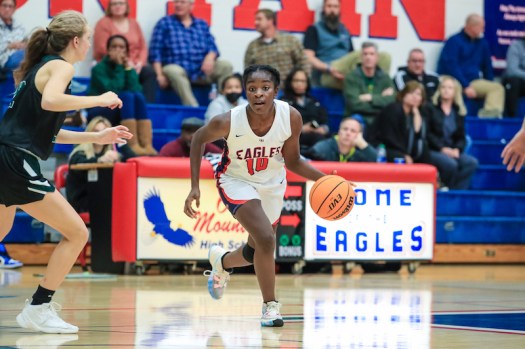 NORTH SHELBY – After losing momentum heading into overtime thanks to an impressive run from the Oak Mountain Eagles on their home floor, the visiting Pelham Panthers got back to what they know best in the extra period on Tuesday, Dec. 7.

Oak Mountain used a 10-1 run down the final minutes of regulation to tie the game 46-46 and gain all the momentum going into overtime, but Pelham took the break between the periods to refocus its defensive effort.

In overtime, the Panthers used several steals to start the quarter on a 5-0 run, including layups from Victoria West and Laci Gogan in addition to a free throw from Myriah Tate.

Oak Mountain got a big answer from Lauren Schuessler on a 3-pointer to quickly trim the deficit down to a point.

The Panthers, however, followed that with two more steals, both leading to layups for West and Gogan once again.

That put Oak Mountain on top 55-49, which became too much to overcome as Pelham closed out a 56-49 victory to remain perfect at 7-0 on the season.

In the opening quarter of the game, however, it was the Eagles that quickly got the upper hand.

They put together a 13-point first quarter behind six different scorers in a balanced attack.

Pelham also had a balanced effort with five different players scoring in the quarter, but the Panthers found themselves in a 13-11 deficit going to the second quarter.

But much like they did at the end of regulation, they put an emphasis on defensive pressure going into the second quarter and it paid off.

After giving up 13 in the opening period, Pelham came back and allowed just five in the second quarter.

That, combined with a consistent effort offensively with 11 more points, allowed the Panthers to take a 22-18 lead into the half.

Out of the break, both teams made adjustments offensively, which ultimately led to an exciting third quarter.

Oak Mountain bounced back with its best quarter of the game, posting 16 points, but the Panther did the same with 17 points.

The Eagles started the quarter on a 6-2 run to tie the game at 24-24, but the Panthers responded with an 9-0 run to regain the lead.

Pelham held the lead throughout the quarter, but Oak Mountain answered with a late 3-pointer that sent them to the final quarter trailing by five points.

The Panthers went on to lead by as many as nine again in the fourth, going up 45-36 following two free throws, but the Eagles clawed back with a 9-0 run of their own this time.

With 32.2 seconds to play, Charity Shaw hit a big layup to even the game at 45 apiece.

That led to a wild final 10 seconds shortly after.

After forcing a steal, the Eagles got a shot at the free throw line and took the lead at 46-45 when Abby Gordon went 1-2 from the stripe with 10 seconds left.

But after missing the second free throw, she got an over the back foul that sent Tate to the line on the other end.

Tate went on to make one of her two attempts as well, creating a 46-46 tie and forcing overtime.

That’s when Pelham made the final defensive adjustments to make the difference.

The Panthers were led by 12 from Tate in the win, while Jaslyn Heflin had nine and Gogan eight.

Oak Mountain got 13 from Gordon and 12 from Lauren Schuessler.