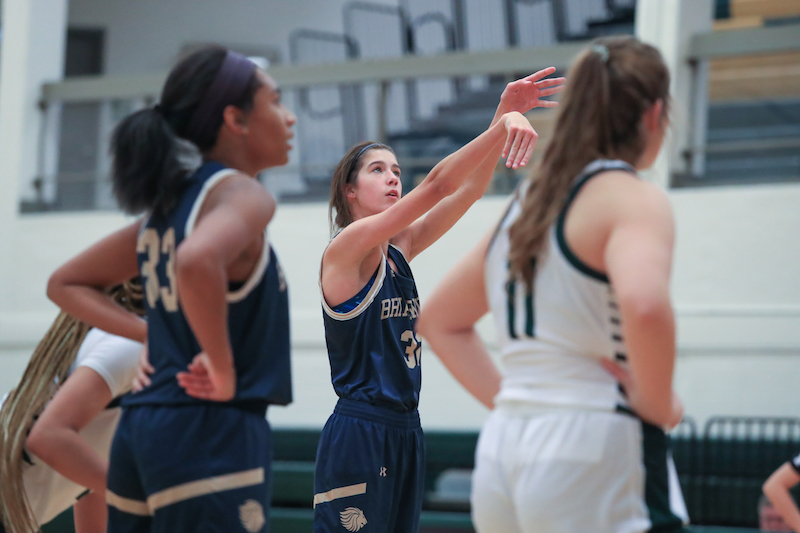 Briarwood's girls were able to pick up an easy win against Woodlawn on Dec. 10, while the boys improved to 6-3 on the season with a win of their own. (For the Reporter/Dawn Harrison)

NORTH SHELBY – It was a dominant night for Briarwood’s boys and girls on Friday, Dec. 10, as both teams picked up wins against the Woodlawn Colonels.

The girls pulled away for an easy 54-27 victory to continue a fast start to the season, while the boys grabbed a 49-34 victory to improve to 6-3 on the season.

Briarwood’s boys got off to a strong start with a 33-point first half behind 14 points in the opening quarter and 19 more in the second quarter.

In the first quarter, they knocked down two 3-pointers and four other field goals with six different players making a shot in the period.

That was followed by an even more impressive second quarter, as the Lions put together their best offensive quarter of the night.

Leading 14-5 already, the Lions posted 19 points thanks to two more from beyond the arc and three field goals from Luke Schultz.

After limiting the Colonels to 13 points, Briarwood took a 33-18 lead into the halftime break.

The third quarter, however, saw Woodlawn’s defense step up in a big way.

The Colonels flipped a switch and limited the Lions to four total points in the quarter on one field goal and two free throws.

Briarwood’s defense gave up 11 points, which was still enough to maintain an eight-point advantage going into the final quarter, but Woodlawn had flipped momentum.

The Lions, however, bounced back in the final quarter.

The defense continued an impressive game, giving up eight points in the fourth, while the offense came back to get two 3-pointers apiece from Zac Lamey and William Lloyd to close out the game with a 12-point period and 49-34 victory.

Lamey led Briarwood with 13 points behind three 3-pointers and a 4-4 mark from the free throw line, while eight total players scored in the win. Miles Gilbert and Schultz both finished with eight points.