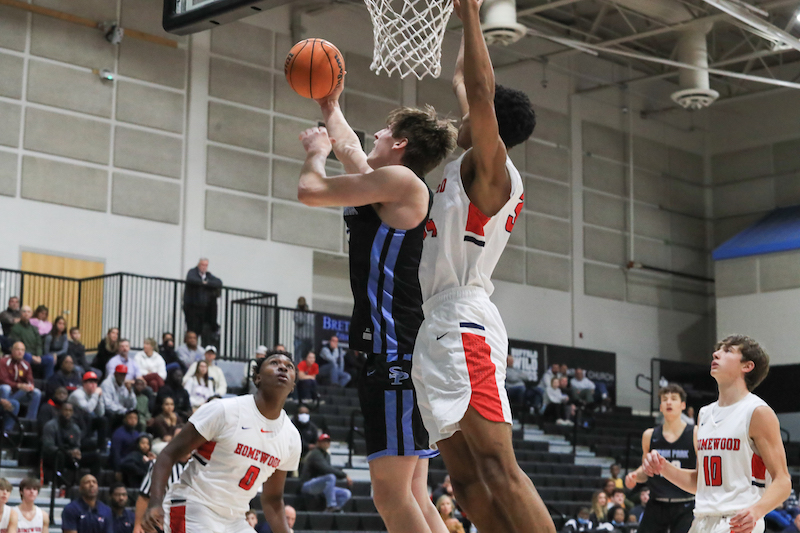 Spain Park’s boys and girls picked up wins against Homewood on Friday, Dec. 10, with the girls winning by 15 points and the boys using a strong second-half comeback. (For the Reporter/Dawn Harrison)

HOOVER – It was an impressive night for the Spain Park basketball teams on Friday night, Dec. 10, as both the boys and girls picked up home wins against the Homewood Patriots.

The girls took care of business with a slightly easier 47-32 victory, but the boys were forced to overcome a large early deficit to pull off 47-40 comeback win.

Early on, however, it was a major struggle for the Jags, who combined for just 11 points in the first half.

It didn’t hurt them early because the defense showed up ready to play in a low-scoring opening quarter that saw Homewood jump out to a slight 8-4 lead at the end of the opening quarter.

But in the second quarter, the Patriots were able to shift momentum completely in their favor.

They went on to score 18 points, while the Jaguars put seven points on the scoreboard, which led to a 26-11 deficit at the half.

The Jaguars, however, have rarely had more than one bad quarter or half this season, and the half gave them a chance to make adjustments, which they clearly did.

To start the second half, they stormed out of the break with a 12-3 run to cut the deficit to 29-23. That was then followed by a 6-2 run, as the Jags had outscored Homewood 18-5 in the first six minutes of the third quarter.

Homewood finished the period on a 5-2 run to regain some composure and take a 36-31 lead into the final quarter.

Spain Park, however, had figured out what was working, and it continued to pay off.

The Jags tied the game early in the final quarter when Hunter Herritt hit a 3-pointer, and that was more than enough to kick start a dominant final period.

The Jags took the lead by one point with 3:18 to play, and finished the game off on a 16-4 run in the final quarter to complete the comeback win.

Colin Turner led Spain Park with 14 points, while Chase James and Sam Wright both finished with 10.

Spain Park improved to 8-2 on the season with the win.

The Spain Park girls notched their 47-32 win against Homewood behind three scorers in double figures. Paxton Gillispie led the way with 13 points, while Kerri Barnes and Alex Baskin each added 11 points in the winning effort.