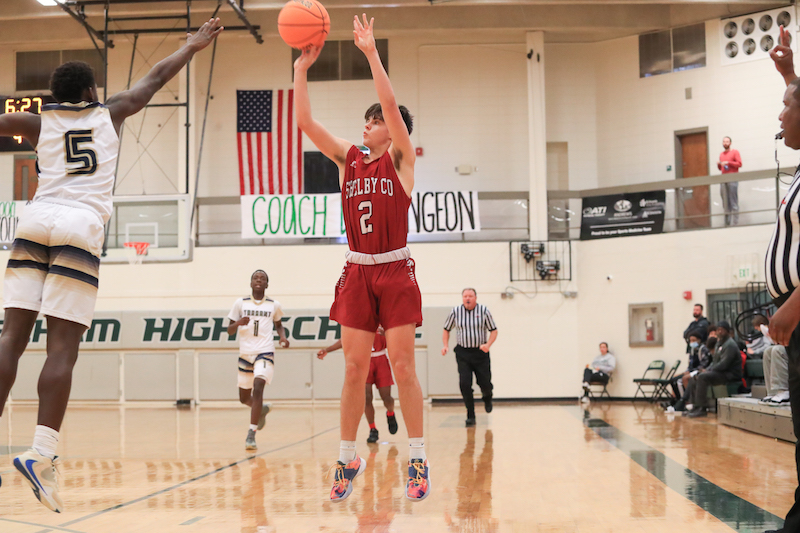 Jon Michael Gay helped Shelby County wipe away an eight-point deficit in the final quarter to pick up a five-point win against Winterboro on Dec. 10. (For the Reporter/Dawn Harrison)

ALPINE – A determined finish for the Shelby County Wildcats on Friday night, Dec. 10, helped them pull off a comeback victory against Winterboro.

Trailing by eight entering the final quarter, the Wildcats outscored the Bulldogs 27-14 in the final eight minutes to pull off a 57-52 victory.

Trailing 38-30 entering the final quarter, the comeback started when Damien Portis got two steals that led to layups before a huge 3-pointer from Jon Michael Gay cut the deficit to one point.

Shortly after, Winterboro was called for a technical foul after a hard foul on Gay.

That gave the Wildcats four free throw attempts, and they sank them all to not only erase the deficit but take the lead by three points with just less than three minutes to play.

From there, they capitalized on hot free throw shooting to finish off the day. Shelby County made 16 of 19 from the line in the final quarter to help play a huge part in the 27 points and finish off the comeback victory. That included eight consecutive free throws down the stretch to cement the win.

It was a big comeback for the Wildcats, who were in a tight battle throughout before losing momentum in the third quarter.

In the opening period, the two teams battled to a one-point game with Winterboro taking a slight 14-13 advantage.

That was followed by another tight 16-15 battle in the second quarter, as the Bulldogs took a 30-28 lead into the half.

The Wildcats mustered up just two points in the frame.

The defense, however, stepped up in a big way. In what could have been a game-changing quarter from Winterboro’s offense, the Wildcats limited them to just eight points, which kept them within striking distance down by eight going to the final quarter.

That ultimately made the difference in Shelby County’s comeback.

Gay led the way with 21 points, while Portis and Noah Reed each finished with 10 points in the victory.