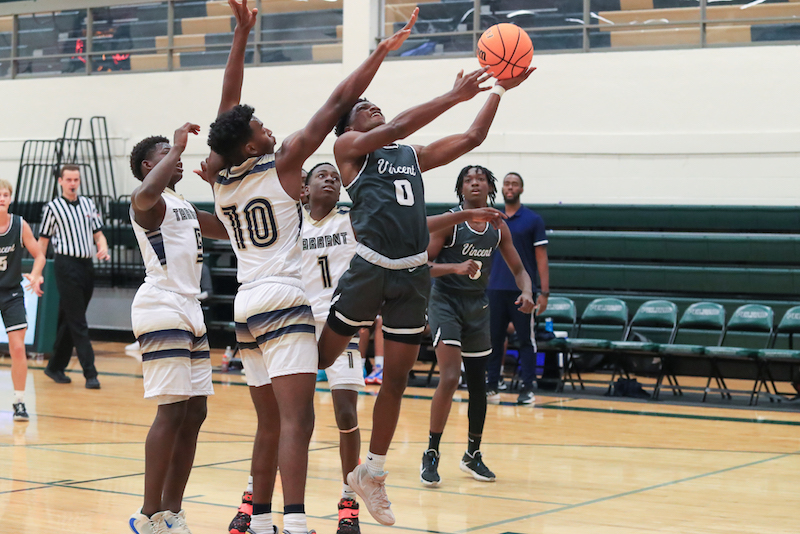 Vincent’s Tray Youngblood totaled 16 points to help the Yellow Jackets pull off a comeback area win against Central Coosa on Dec. 10. (For the Reporter/Dawn Harrison)

VINCENT – An 18-point final quarter helped the Vincent Yellow Jackets erase a game-long deficit on Friday, Dec. 10 to pull off a crucial area win against Central Coosa early in the season.

Coming off a loss in their first area game of the season to B.B. Comer, the Jackets faced a 25-18 deficit at the half and trailed by as many as 11 in the third quarter before flipping a switch.

Trailing 33-26 entering the final quarter of play and 36-29 early in the quarter, Vincent finished the game on a torrid pace.

From that point, the Yellow Jackets went on a 12-1 run to snatch the lead at 41-37. With that momentum switch so late in the game, it became too much for Central Coosa to overcome in what became a 44-40 victory for Vincent.

The Jackets outscored Central 18-7 in the final quarter after scoring 12 or less in the first three quarters.

Vincent’s defense, however, was the key to the win.

The Yellow Jackets gave up 18 points in the second quarter, but limited Central Coosa to eight or less in the other three quarters of the game to give the offense time to find its rhythm, which finally happened late.

In the opening quarter, Vincent jumped out to a 4-1 lead, but Central responded with a 6-0 run of its own.

In a low-scoring, defensive quarter, that became enough to give the Cougars a 7-6 lead through one quarter of play.

The second quarter was a tight battle up to a 12-11 game in favor of Central Coosa, but the Cougars then put together a 14-4 run to take control of the game.

Vincent did hit a shot right before the half ended to trim the deficit to 25-18 going into the half.

Out of the break, the whole got even deeper for the Yellow Jackets, as the Cougars opened on a 6-2 run to create an 11-point advantage.

They held a 10-point lead for several minutes until a flurry of late shots from Vincent gave the Jackets some confidence going into the final quarter, as they cut the deficit back down to seven after holding Central scoreless for the second half of the third quarter.

In the final quarter, Vincent continued to take advantage of that shift in momentum, hitting a 3-pointer right away to cut the deficit to four points.

Central answered a minute later with one of its own to go back up by seven, but from there, the Jackets put together a 12-1 run very quickly to snatch the lead away and create the final push toward overtaking control of the game en route to the four-point win.

Ty’Qun Goodman finished the game 2-10 from the floor, but he did have seven points, and more importantly, he totaled 13 rebounds in the paint.