Chelsea moves up to Class 7A in reclassification 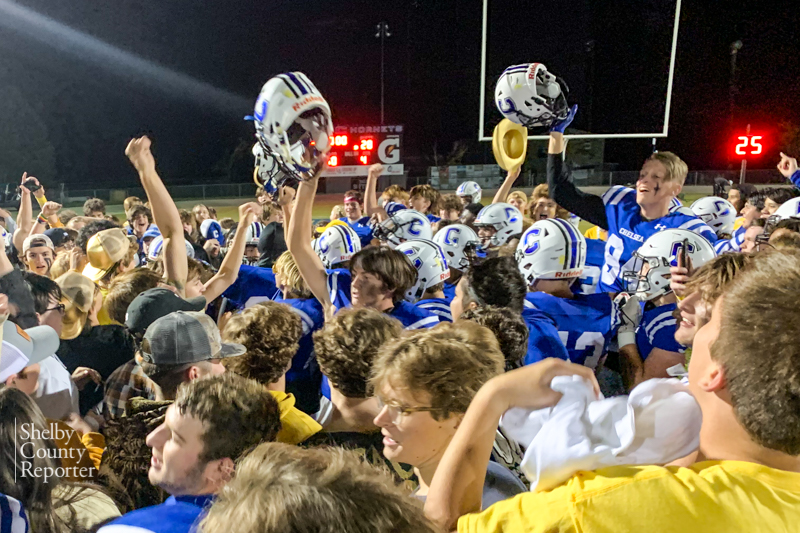 With many waiting in anticipation for reclassification to take shape following months of rumors, the moment came on Tuesday, Dec. 14 when the AHSAA made the official announcement of what teams would be in what region and classification.

And with the announcement came a big move for Chelsea High School.

That means during the 2022-2023 and 2023-2024 seasons, the Hornets will compete in the 7A classification for football, cross country and volleyball. And as one of the state’s fastest growing cities, that likely means it is a permanent jump to the highest classification.

The football team is coming off a 4-7 season in Class 6A this past season and a first-round playoff appearance.

In their history in the 6A classification, Chelsea has five playoff appearances four winning seasons, no playoff wins and a best record of 8-3 since joining 6A in 2011.

Chelsea’s last playoff win came in 2007 as part of Class 5A when the Hornets advanced to the second round of the playoffs.

Now, Chelsea will jump into what many say is the most difficult region in the state when it comes to football with the likes of three-time defending state champion Thompson, as well as state power Hoover.

The region will give Chelsea several good rivalry matchups in region play, including Oak Mountain and Spain Park along the U.S. 280 corridor as well as an additional county opponent in Thompson.

It won’t get much easier in volleyball for the Hornets, who will join Class 7A, Area 6 alongside defending state champion Spain Park as well as Oak Mountain and Hewitt-Trussville.

The number of wins, however, to reach the state tournament in volleyball and the state championship in football are now less due to a smaller number of teams in Class 7A, but it comes against some of the stiffest competition in the state with the largest schools.

Chelsea, however, will be no stranger to stiff competition.

In football the last two years, the Hornets have competed against some of the state’s best teams in their region, including Briarwood, Mountain Brook, Homewood, Shades Valley, Huffman and Woodlawn.

Cross country wise, Chelsea will have one less team in its section, but the Hornets will now join Class 7A, Section 3, which features Hewitt-Trussville, Hoover, Oak Mountain, Spain Park, Thompson, Tuscaloosa County and Vestavia Hills.

They will, however, leave a section that featured powerhouse 6A teams Homewood and Mountain Brook, who had combined to win five of the last six Class 6A state championships.

The move came with an increase in enrollment for Chelsea, but it still remains the third smallest school in the 7A classification.

It also just put Chelsea narrowly in the 7A classification. Helena, another Shelby County school, had a daily enrollment of 1,063.30 as the largest Class 6A school just missing the jump into Class 7A.

Pelham was the next highest with a daily enrollment of 832.4, which was 25th highest in Class 6A.

Calera, another one of the state’s fastest-growing cities, had a daily enrollment of 778.15, which was around the middle of the pack in Class 6A.

The Hornets will likely move to Class 7A in winter and spring sports, including basketball, baseball, softball and soccer, but the AHSAA won’t reclassify those sports until the completion of their respective seasons, leaving area-alignment unknown.