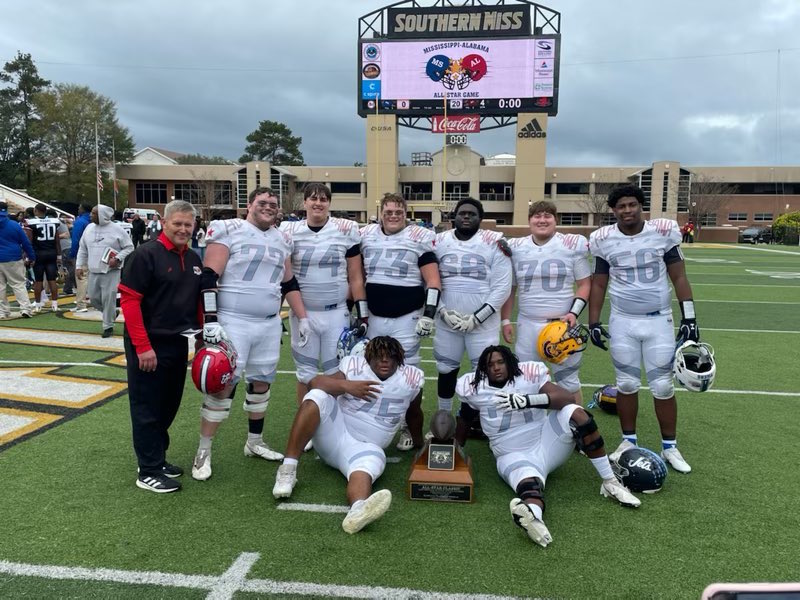 Pelham's Caleb Newell celebrates with the rest of the offensive line in the Alabama-Mississippi All-Star game after Alabama pulled off a 20-0 shutout. (Contributed)

HATTIESBURG, Miss. – Several local football players not only made the short trip to Hattiesburg, Mississippi on Saturday, Dec. 11, but got the special opportunity of helping the Alabama All-Star team make history.

Calera’s Kobe Prentice, Oak Mountain’s Evan Smith, Thompson’s Jax Van Zandt and Pelham’s Caleb Newell all competed in the game from Shelby County, and each helped play a role in a 20-0 shutout victory in the 35th playing of the Alabama-Mississippi All-Star game.

It marked just the second shutout all-time in the game, and the first time Alabama has won the game with a shutout.

And each of the four local players got action in the win, with two of them leading their respective positions.

Prentice, an Alabama commit, put together an impressive performance as the game’s leading receiver.

Prentice totaled 64 yards on four catches and five targets, which was 36 more yards than the next-closest receiver in the game.

It capped off a special senior season for the All-County First Team receiver, after he totaled 1,231 yards and 18 touchdowns on 69 receptions this season.

Van Zandt, a part of Thompson’s historic defense this season, also went out with a bang.

Following another special season that saw him total 15 tackles for loss, four sacks and 60 total tackles, Van Zandt stormed into the All-Star game and became the leading tackler of the defense’s shutout effort.

He had six total tackles to tie for the team lead and recovered a fumble in the winning effort as well.

Smith, the county’s Player of the Year this season following a stellar 2,000-plus yard season in leading Oak Mountain to the second round of the playoffs for the second year in a row, played some on both sides of the ball to help the Alabama team.

Newell suited up on the offensive line and not only was strong at shoring up protection for the quarterback and opening holes in the run game to help the Alabama team move the ball, but he also put together a hard hit after a pass was intercepted.

All four athletes made this year’s All-County team and are headed to play college football following several special seasons as starters for their respective schools.

Now, they’ve added one more win as All-Stars to the list before taking the next step.