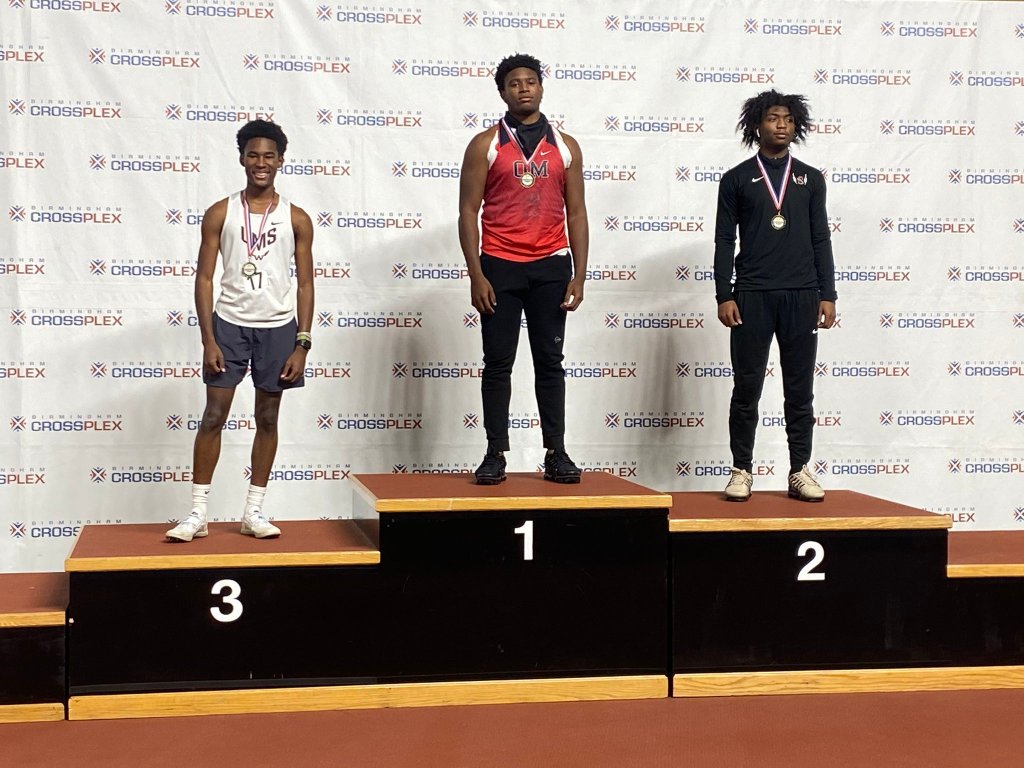 Oak Mountain's Omar Crooks picked up a win at the Holiday Invitational on Saturday, Dec. 11 in the long jump. (Contributed)

BIRMINGHAM – The 2021 indoor track and field season is now underway, and it kicked off with a bang at one of the first big events on the season at Birmingham’s CrossPlex on Saturday, Dec. 11, with several local teams battling in a crowded meet.

Oak Mountain’s boys put together a special showing early in the indoor season with five finishes inside the top 10.

The Eagles were led by Omar Cooks who was one of the only winners from the county during the event. He took the long jump with a distance of 22 feet, 7.5 inches.

They also saw three other top-five finishes thanks to Ethan Hammett and two of the relay teams.

Cade George was the other individual athlete in the top 10 for the Eagles, finishing sixth in the 400-meter dash with a time of 51.33 seconds.

Helena was one of the most consistent teams in the event with seven athletes finishing inside the top 10 of their respective events.

Aspen Warren had the next highest finish by claiming sixth in the 1,600-meter run with a time of 4:31.06. Kenny Spears and Walter Womack also had impressive showings in the 800-meter run and 60-meter dash, respectively.

Desmon James also finished 10th on the dot in the triple jump with a distance of 38 feet, 10 inches.

The Helena girls had the highest individual finisher for the Huskies with Lamaria Bennet claiming fourth in the long jump thanks to a distance of 16 feet, 2.5 inches.

Chelsea’s girls had a big event as well with four finishes inside the top 10 of four different events, while the boys got one top-25 finish.

The girls were highlighted by Cady McPhail, who finished fifth in the 400-meter dash to kick start the indoor season. She finished the event with a time of 59.86 seconds.

Alana McCulla was the other individual athlete with a strong finish. She claimed sixth in the pole vault after clearing a height of 9 feet, 6 inches.

Calera’s top two finishers were Tre Bright and Christopher Thomas, who both finished inside the top 20. Bright was the highest finisher for the Eagles, claiming 11th in the shot put with a distance of 42 feet, 8 inches. Thomas finished 19th in the 400-meter dash with a time of 52.68 seconds.

Victoria Farrish added a finish of 26th in the shot put with a distance of 27 feet, 7 inches.

Indian Springs’ only athlete was Charlie Wilder, who finished 94th in the 1,600-meter run for the boys.