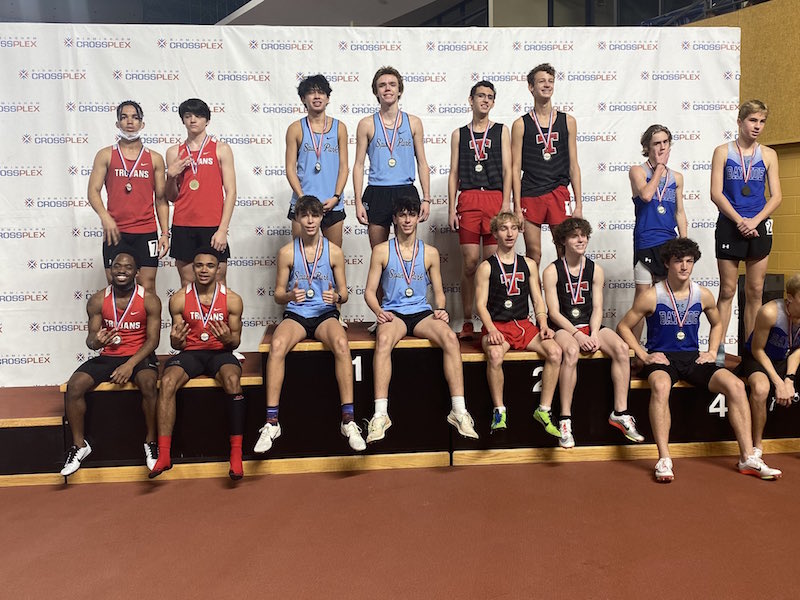 Spain Park and Thompson kicked off the track and field season with impressive performances at the Holiday Invitational on Saturday, Dec. 11. (Contributed)

The two teams combined for eight first-place finishes at the event, with the Jags and Warriors each totaling four in the meet.

Vickers finished with times of 59.34 and 2:22.73, respectively, between the two races to help the Jaguars close out consecutive top-two finishes.

Keon Buck led the way for the boys, as the state champion from last year won the 60-meter dash with a time of 6.85 seconds to kick off the season. He finished ahead of teammate Zamir Farris in 12th with a time of 7.35 seconds.

In the 1,600-meter run, the Jags also got a second podium finish from Garrett Bishop, who finished third with a time of 4:48.78. JT Brownlee and Weston Higginbotham finished 10th and 11th, respectively.

The Thompson Warriors were highlighted by a strong start to the season with 17 athletes finishing inside the top five of their respective event, including four finishes atop the podium.

Jackson Hamlin and Gavin Horton led the boys, as Hamlin continued a strong year of running and Horton picked up where he left off last year.

The girls also had two first-place finishes, with Akasha Dudley winning the shot put with a distance of 35 feet, 8.75 inches and the 4X400-meter relay team winning behind a time of 4:14.83.

The girls also got top-five finishes in the 400-meter dash, 60-meter hurdles and the 4X200-meter relay.

Outside of the Hamlins and Hortons in their respective events, the boys had eight others finish inside the top five.

Jordan Smith and Jaxon McEuen both finished highly in the 800-meter run with Smith taking third behind a time of 2:08.65 and McEuen taking fourth with a time of 2:09.89.

In the 60-meter hurdles, Bradley Franklin finished second with a time of 8.45 seconds, while Gavin Horton added another strong finish of fourth behind a time of 9.29 seconds.

Eli Sutton then added one last top-five finish in the triple jump. He finished second with a distance of 44 feet, 0.5 inches.