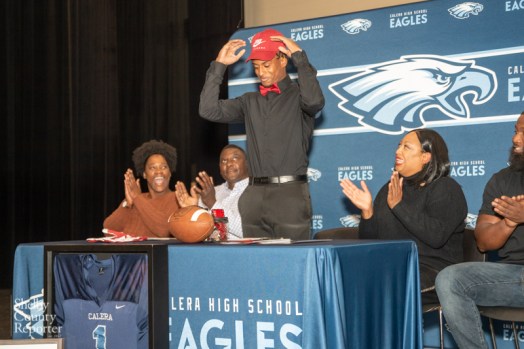 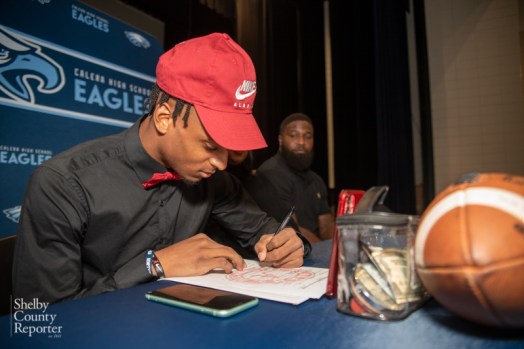 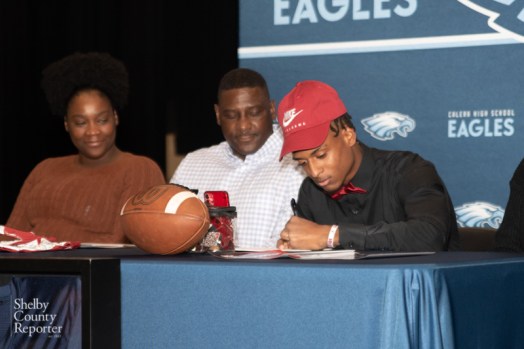 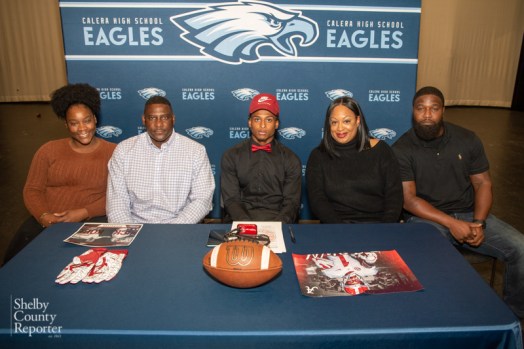 CALERA – Sitting inside Los Mesas Mexican restaurant in Calera eating with friends, Kobe Prentice got the call of a lifetime.

“I went outside and screamed,” Prentice recalled. “I was real happy. It was a moment to remember.”

It came a day after he had committed to Maryland, which led to a decommitment from the Terps and a quick commitment to the Crimson Tide.

“Alabama was always the goal,” Prentice said. “I’ve always been an Alabama fan.”

On Wednesday, Dec. 15, Prentice got to make his dream a reality when he signed with Alabama during the early signing period.

He made it official early in the afternoon when he sent his paperwork in, before then holding a special signing ceremony at Calera High School on Wednesday night in front of family and friends.

“I’ve been dreaming of this since I was a kid,” he said. “It’s a big day for me. It’s been a challenge, but ever since I embraced the challenge and did my best, it’s been very successful.”

Prentice entered his senior season with a lot of hype because of his attention from Alabama, but also because many were just starting to realize the speed he played with.

Entering off a junior season in which he totaled 711 yards and nine touchdowns on 41 receptions for an average of 17.3 yards per catch, he had shown 4.3 speed during college camps.

He also gained a lot of recognition after running track for Calera as well, running a 7.07 60-meter dash during the indoor season before finishing second at state in the same event with a time of 7.05 seconds.

And during his final football season, that speed was on display both after the catch and before the catch en route to totaling 1,231 yards and 18 touchdowns on 69 receptions.

“Every time I touch the ball, I know I’m not a real big guy, so I have to try to use my speed to get to the end zone,” Prentice said. “I just try to make a play every time the ball comes to me.”

It was a mindset head coach Jason Hamlin appreciated during his first season, as Prentice played a key role in a historic year for the Eagles.

“What can I say. He was Calera High School. He was Calera football this fall,” Hamlin said. “We asked a lot of him in certain situations, and even sometimes, we put him in bad situations, and that’s my fault, but he never once complained. He did anything that was asked for him. He always put the team before himself. I’m ecstatic that he gets to continue his football and academic career at a major university.”

Prentice finished the season as one of the top receivers in the state and second only to Thompson’s Ryan Peppins in the county, who is headed to the University of Utah.

Now, the speedy receiver will set his sights on becoming the next in a great line of Alabama receivers, and both Prentice and Saban have big ideas of what can happen.

“He told me that if I just stay focused, I can help the team out tremendously,” Prentice said of Saban’s message to him. “He sees me as a secret weapon.”

Prentice also said he compares his game to Jaylen Waddle due to his speed, and said every time he gets the ball, he wants to try to make a play and get to the end zone.

He said he hopes that his work ethic and will to get to the end zone helps him accomplish the goal of breaking the receiving record for most receiving touchdowns, currently held by DeVonta Smith at 46, which is also an SEC record.