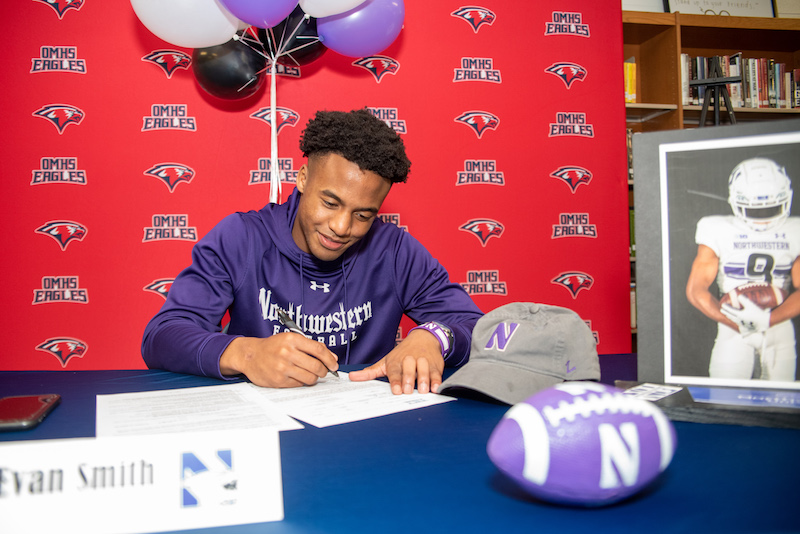 NORTH SHELBY – Before he even took the field, his former head coach hyped him up as a “secret weapon.”

“It means a lot,” Smith said of the moment, which occurred inside Oak Mountain High School’s library. “I remember just waking up this morning. I was excited, but it was a nervous excitement. My life has kind of changed, but I’m ready for it. It has been a dream to play power five football, and I get the chance to do it. I’m forever blessed and grateful for this opportunity.”

Smith’s final season at Oak Mountain saw him earn the county’s Player of the Year award after totaling 1,110 rushing yards and 1,184 passing yards with a combined 28 touchdowns to help lead the Eagles to the second round of the playoffs for the second year in a row.

It capped off a special career that saw him start all four years at Oak Mountain, completing his time with the Eagles totaling 7,622 yards and 89 touchdowns.

When he stepped onto the field as a freshman, Smith hoped this day would come four years later, but he had other goals in mind.

“I want to say I did (expect this), but as a freshman, I just focused on not getting killed out there, especially the teams we played,” he admitted. “It was always a dream for me, so I just worked my tail off.”

His work ethic and character were two aspects of Smith’s four years at Oak Mountain that former coach Cris Bell admired before Tyler Crane stepped in for his senior season and saw the same qualities.

“For me as a first year head coach, having a power five, Division I athlete play for you is an absolute dream,” Crane said. “It made all our jobs a lot easier having Evan here with us. He is an absolute amazing young man, just as good as he is an athlete. He couldn’t have been a better kid to coach.”

Smith said Oak Mountain was a special place to be because of the family atmosphere that was created, which he admitted he’ll miss when he moves on to Northwestern.

But the senior is excited for the next step and what lies ahead at the next level.

“My mom prides on academics. So going to a top-tier university is never a bad choice, and along with playing power five football,” Smith said. “They’ve won Big 10 championships and the next step is going to the college football playoff. It’s the best of both worlds, and I feel like I can grow as a man and a player there.”

As he heads on to take the next step in his journey, Smith said he just wants to keep focusing on being himself and working hard.

“I just want to be the best Evan I can be, whether that’s barely playing, whether that’s playing a lot or going to the NFL,” he said. “Every day, I strive to be better than the next. I’m just going to take it one step at a time, and whatever happens, happens.”