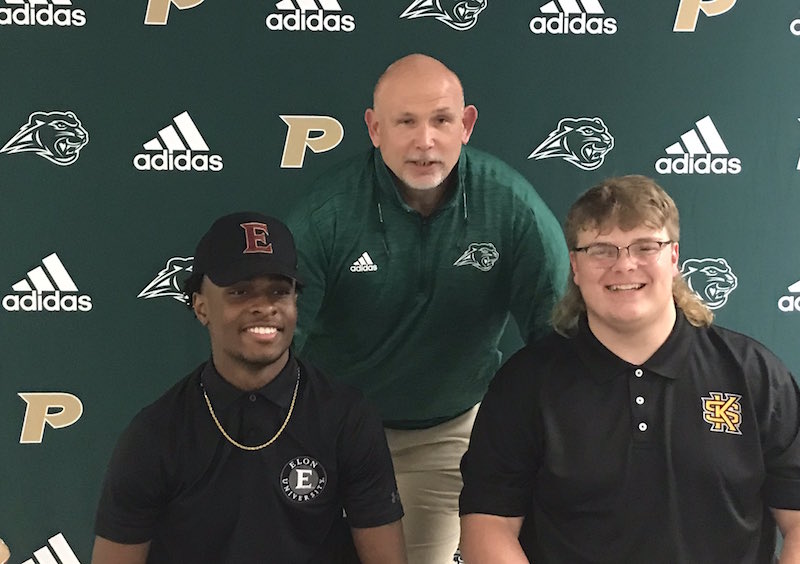 Pelham's Will Lankford, left, and Caleb Newell both signed their letter of intent to join collegiate football programs on National Signing Day. (Contributed)

PELHAM – It was a special night at Pelham High School to cap off National Signing Day on Wednesday, Dec. 15, as two athletes got the opportunity at a rare moment.

In front of family, friends and teammates, Pelham quarterback Will Lankford and offensive lineman Caleb Newell both followed stellar high school careers by signing to play football at the collegiate level.

“It’s very, very surreal. I’ve been playing since I was 5, so that’s 13 years of work,” Lankford said. “It’s always the same school, so now going off to a different school is going to be different, but it’s still love regardless. I’m going to have fun while I do it.”

Lankford is set now to attend Elon University in North Carolina to continue striving to play the quarterback position, while Newell is headed to Kennesaw State University just north of Atlanta to continue paving the way for a new offense.

Lankford finished his two years as a starter at Pelham with 2,187 passing yards, 1,051 rushing yards and 43 combined touchdowns.

As a senior, he totaled 1,326 yards through the air, 459 yards rushing and 23 touchdowns to cap off his time with the Panthers.

It was a special moment for Lankford, who will now join his brother Xavier Lankford in the college ranks. Xavier is currently at Alabama A&M after graduating from Pelham two years ago.

“It’s a fun time for me and my family. Seeing a second athlete go off to college, it’s pretty awe-inspiring,” Will said. “There will definitely be a lot of jokes cracked at family gatherings about who had a better high school career and who is having a better college career. It’s going to be pretty fun.”

As for Newell, he’ll now join the Owls after putting together a special last three years with the Panthers as a starter.

“I would like to thank all of my coaches, teammates, friends and family,” Newell said following his commitment over the summer. “Without (them), I would not be in the position I am today. I would also like to thank coach (Tom) Causey for helping make me the player and man I am today.”

He also said that he knew Kennesaw State was the right fit from the beginning of the recruiting process.

“Caleb is my guy,” Will said of the offensive lineman who protected him. “We’ve been teammates basically since kindergarten. I am so proud of him. He put in work and nobody deserves it more. You can tell how much he loves the game, how much he loves his teammates. It’s the same guy every day. Whenever he got his first offer, he was the same guy, whenever he said he was going to sign early, he was the same guy. Nothing but love for him, I’m so proud of him.”

Both were also very appreciative of Causey molding them since he got to Pelham as the first group of seniors to come from sixth grade all the way through high school with him.

“Coach Causey definitely took me in, basically as a sixth grader because that was his first year here,” Will said. “I was the first quarterback to go fully through a Causey system since middle school. He came to some middle school games, and he would always be there. I love coach Causey. He’s a great coach and an even greater man. He taught me a lot of lessons. I’ll be following closely. He’s basically like another father to me. Bleeding it down is what he likes to say.”

The two will leave the program with special milestones after leading the Panthers to their third region championship in school history last year and first since 2006 before then finishing in the top two of the region standings this season.

During their final two seasons, they led Pelham to a combined record of 15-7.