Remembering the passion and dedication of AWC’s Doug Adair 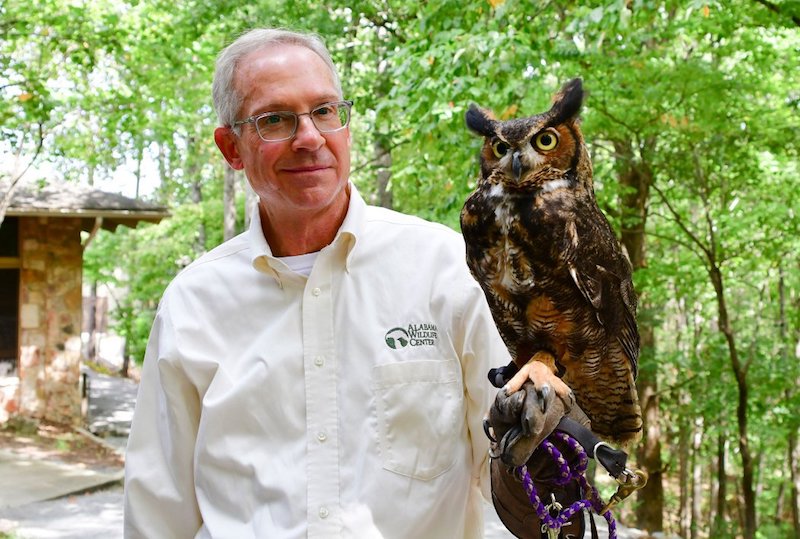 Doug Adair, the executive director of the The Alabama Wildlife Center, died suddenly on Monday, Dec. 6. Adair served as executive director since 2013 and applied his passion for Alabama’s wildlife to every aspect of his life. (Contributed)

PELHAM – On Monday, Dec. 6, Pelham lost a prominent figure in its community. Doug Adair, the executive director of the Alabama Wildlife Center, died unexpectedly, leaving behind a legacy of passionate dedication to helping Alabama’s wildlife and community.

Adair was a native of Birmingham whose love of the outdoors permeated his entire life. He was an Eagle Scout growing up, and as an adult he spent as much time as he could traveling around the world to see what nature had to offer.

He was a lawyer for more than 20 years, practicing cases regarding public affairs, civil litigation and governmental issues. Before becoming a lawyer, he was director of the Office of Public Liaison at the U.S. Department of Agriculture. He also served as associate director of the White House Office of Cabinet Affairs, deputy director of public affairs and deputy press secretary at the USDA.

Throughout his lengthy career in law, Doug never lost his passion for wildlife and the outdoors. In 2013, he assumed the role of executive director of the AWC, and fully enveloped himself in a mission of conservation and education about Alabama’s diverse wildlife.

Andrew Arnold, AWC’s director of education and outreach, began working with Adair in 2019, and he said Adair helped make his transition into the job as smooth as possible while welcoming him with open arms. According to Arnold, it was just another example of Adair’s ability to lead with a kind heart.

“He was a great leader,” Arnold said. “Rehabilitation work is tough, and he took it on full steam and was very dedicated to what we do here at the Wildlife Center. With that much passion, it’s impossible to not put in 100 percent.”

In addition to his work with the Wildlife Center, Adair’s love of the outdoors was also prominent in his work with the Boy Scouts of America program. As a former Eagle Scout, Adair understood the opportunity to educate young minds about why conservation matters.

J.T. Dabbs, the Scout Executive for the Greater Alabama Council, knew Adair for over 30 years, and worked closely with him on the program’s Executive Board. Dabbs said Adair was “an amazing and dedicated volunteer,” and Adair’s passing is “a devastating loss for us.”

“Just his integrity and his leadership, you know he was just one of a kind,” he said.

“He cared about people, he cared about our country, he cared about locally making a difference in so many kids’ lives as a volunteer,” Dabbs continued. “He would call me just to see how I was doing, and he would always take the time to just say, ‘I appreciate all you’re doing.’”

It’s a general consensus that Adair had an ability to make all of his team members feel like family. He was always willing to lend a hand to those who needed him, and devoted his time to making sure everyone on his team, whether Scouting or with the Wildlife Center, felt appreciated and seen.

“One of my fondest memories was shortly after I had started,” Arnold said. “It was the first volunteer appreciation cookout I got to participate in. I got to see how hard [Doug] was organizing all of the people here putting in their time and energy to have a day where they can take a break and celebrate each other and the work that we do. He really lit up getting to do that and it showed me how much he cared for everyone here.”

In every role he carried, Adair made sure to embody the true meaning of leadership, making sure to raise the spirits of his team during dark times. During COVID-19, Arnold said Adair was a dedicated leader who helped “steer the ship” through the rough and uncertain times.

“It was a very rough time for us,” Arnold said. “[Doug] helped find the reserves in all of us who did feel confident to stay around, and we never closed during the entire pandemic. Our doors were always open for injured and orphaned birds, we never stopped taking birds into our facility. Doug was there for everything.”

Adair’s passion for the outdoors never wavered, and it became apparent to anyone who encountered him that he was a lover of all wildlife, from birds of prey to insects.

According to Dabbs, Adair had an energy that drew people to him, and he often inspired those he encountered to help whatever cause he was so passionately involved in.

“I know he loved what he was doing with the Wildlife Rescue, he was so passionate about that,” Dabbs said. “He made a difference with us because he would have the team there and come to our camps and bring their demonstration birds. He was spreading the love for saving wildlife in our state with the kids in scouting.”

“From all of our conversations, all of his true experience with wildlife came early in his life as an avid explorer and as an Eagle Scout,” Arnold recalled.  “He always maintained a love for the outdoors and animals. He would always show me pictures of somewhere he went in his 20s and he would have like a toucan on his arm or something like that.”

During his time as executive director of AWC, Adair helped contribute so many great accomplishments that helped boost the Center’s presence in the community. Adair had a flair for fundraising, being able to take a small event and turn it into a full-blown affair that helped raise money for the Center. Events like Owl-o-ween and the Wild About Chocolate fundraiser became favorites in the Pelham community, and Adair was at the helm of every one.

“He did so many great things for the Center that will be a lasting legacy,” Arnold said. “I think the most notable is helping us as a nonprofit to secure the funds for Shelby, our bald eagle’s home. So now people from in and out of the state can come visit and see this majestic bird. That’s special not only for us but Shelby County as a whole.”

One word is not enough

Adair’s passing has left a large hole in the lives of many Shelby County residents. When asked if they could describe Adair with one word, several people said one word just wouldn’t cut it.

“Passionate,” said Mike McDevitt, the Interim Executive Director of AWC. “He was so passionate about the Center and the wildlife we have here and our mission to protect nature. He couldn’t help but tell you about the great things the Center was doing. He was a very passionate person.”

“He was a kind person,” Dabbs said. “Just a kind and caring person with great integrity who truly lived up to the 12 points of the Scout law. He made a huge difference.”

“Fearless,” Arnold said. “He took on a lot, and would have multiple tasks running that would be a lot for anybody to handle, but he was so driven to get all of it done.”

“I didn’t grow up in Shelby County, so my experience has been since I moved here and starting this job, but I’ve seen that everybody I bump into knows Doug Adair,” Arnold said. “Whether they’ve had interactions with him, he made them smile and they have an interesting story to tell. As much as we’ve lost a great civil servant, a lot of people lost a friend as well. Somebody who put a smile on their face and cheered up their day, and I think that’s about as tough as anything to swallow.”