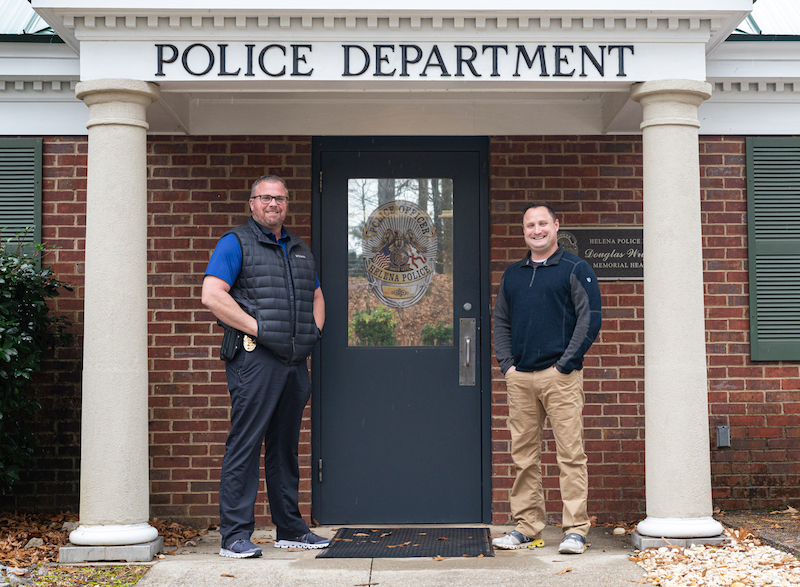 HELENA – Dec. 14 is a big day for Brad Flynn. It’s the anniversary of his inaugural day of becoming Chief of the Helena Police Department. Sitting in his office, he laughs about how the past twelve months have felt like several years crammed into one.

Flynn’s first year as Chief has definitely been a rollercoaster, to say the least. Having to lead his team through COVID-19 while also forging positive relationships with the community during a time where focus on police officers was at an all-time high was no easy feat. But Flynn made it through with a solid year under his belt, and now he’s happy to reflect on the past year and how he hopes to carry his experiences into 2022.

Flynn had been with the department for 25 years before taking over the position. He started his career as a Reserve Deputy with Jefferson County and then went to Mountain Brook for a little over a year before making his way to Helena PD. That was back in 1995, and he thoroughly cherishes every single year.

“This is home to me,” Flynn said. “This is where I’ve grown, and this city has afforded me every opportunity I could have ever wanted in my career here. Doing all the different types of assignments and allowing me to better myself professionally and personally…you would never know what’s around the corner, and this city has made everything happen for me.”

Flynn said getting the opportunity to lead the department was “humbling, to say the least,” and every single day he feels honored to be there.

“Helena is an enigma,” he said. “I think we’re unique in the way this community respects us and we respect our community. That relationship we have with the community, but also the way we function internally. We are a family, and we aren’t too big to be able to say we’re not a family. That’s a big deal to me. I always tell the officers, ‘Family comes first,’ and to me that means we have a job to do, and I know they’re loyal to the job and loyal to the community, but family comes first.”

Making sure his officers understand the value of family, both at home and at work, is a top priority for Flynn, as he said the stress and pressure of being a police officer comes with the need for emotional support. As the chief, Flynn made it his own priority to make sure every officer in his department felt invested in and knew that they had a strong support system in him as a leader.

“Yes, we’re a police department, but we’re also a family, and family takes care of each other and supports each other,” he said.

Before even being appointed chief, Flynn and Mayor Brian Puckett communicated what they both wanted for the city and for the future of the department. Both had community engagement at the top of their lists, setting the path for a “two-way street of engagement.”

“We want to get to know the community and find out what their concerns are and how we can better be of service to them, but at the same time we want them to get to know us and get to know the person wearing the badge,” Flynn said. “We’re not just police officers, we’re people…that’s something I think over the last year we’ve been very successful in doing is humanizing our officers to the community and letting them know we’re real people who are going to be here for them.”

“There’s a level of trust and respect there on both sides, and I think that’s really what sets Helena apart from other departments in communities that may not have that relationship with their police department,” Flynn continued. “It’s very important for me that any member of this community that has an issue they need addressed, they can call any time day or night and can trust in the fact we’re going to be there for them and try to find a solution for them.”

Flynn has a plaque hanging in the precinct that says, “The Helena Standard,” which is something he said he set from day one for all of his officers to live up to. The standard is simple: embody integrity, accountability, humility, communication, and fairness, and he expects his officers to represent these characteristics outside and inside the department.

“It’s nonnegotiable, there is no compromise,” he said. “You either meet it or you won’t, and if you’re going to be a police officer here, you’re going to meet that standard every single day.”

Flynn and his department collectively felt the pressures of 2020, especially the intense focus that turned to law enforcement. To Flynn, this was a chance to show how Helena stands out from other departments.

“Coming off of 2020, with the microscope being on law enforcement, law enforcement has to do better,” he said. “We have to change, we have to adapt, we have to look at ourselves and go, ‘What can we do better?’ We don’t have the luxury of saying that we don’t need to change or we don’t need to adapt or we don’t need to listen to other perspective. We have to do that to stay in tune and keep that relationship with the community. I feel like this first year, we built a good foundation to keep that level of communication going, and it seems to be a positive thing.”

Flynn immediately went to work building strong community engagement. Over the past year, he has built partnerships with people, businesses and nonprofits in the community and set up a sense of trust to let everyone know the Helena PD is there for them. One of the things Flynn said he’s most proud of accomplishing this year is helping put a spotlight on sensory awareness and sensory inclusion.

“My son has sensory needs and has a form of autism, and that personally and professionally gave me the opportunity to not only make my community better for everybody, but my son included,” he said. “Us doing that has opened so many doors. I’ve found a passion that I’ve never felt before.”

Flynn credited the mayor and the Helena City Council with making the progress with community outreach possible, and said he feels his career led him to be here.