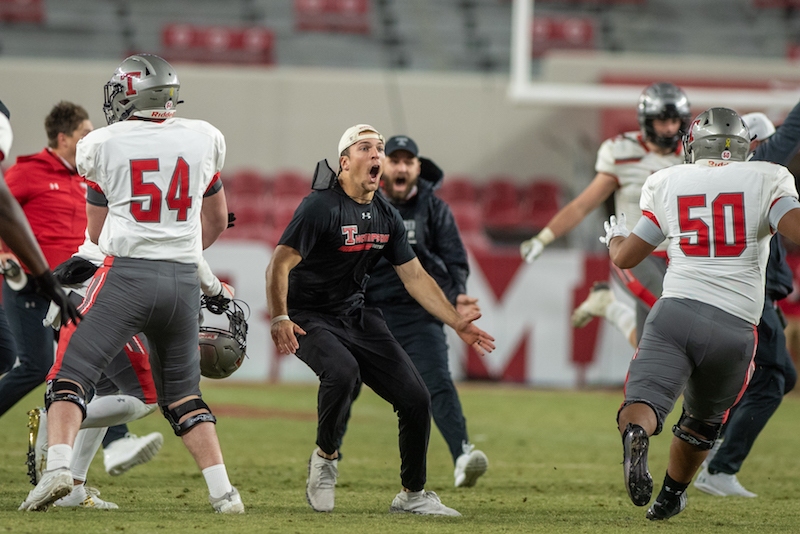 Jake Ganus has been named the next head coach at Moody High School after serving as an assistant at Thompson for the previous five years. (Reporter photo/Keith McCoy)

MOODY – When the phone rang on Wednesday night, Dec. 15, Jake Ganus answered with anticipation. Soon after, his life changed.

“The feeling was just overwhelming emotion when I got the call. This is something I’ve wanted for a very long time,” Ganus said. “Based on who I am and my past experiences, I’ve been waiting on the right opportunity to become a head coach. And this was it.”

Pending board approval in January at the next St. Clair County Board of Education meeting, the former Chelsea, UAB and Georgia star will become the school’s 13th head coach.

Ganus comes to Moody off three state championships in a row with the Thompson Warriors and five years as an assistant. 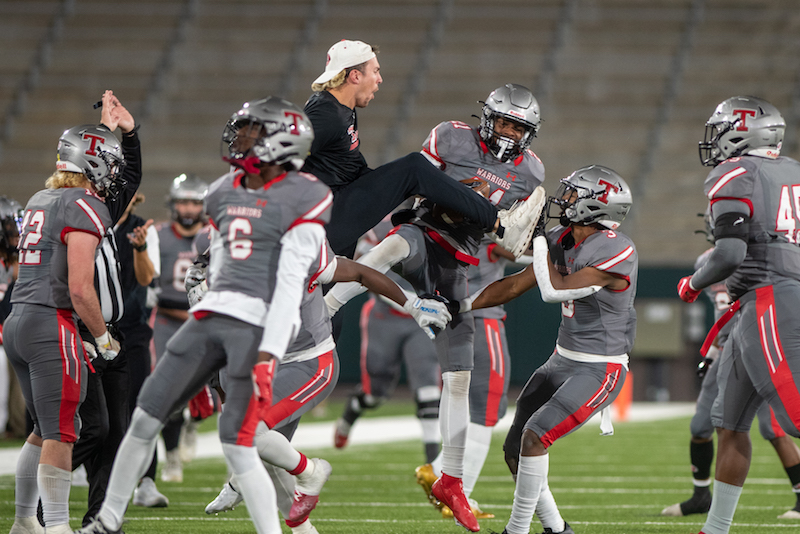 As the associate defensive coordinator and linebackers coach at Thompson, Ganus has helped the Warriors’ defense give up an average of 21.2 points per game or better, including a historic 7.1 points per game this past season.

“I came in green. Thompson was my first job,” Ganus said. “I maybe had some x’s and o’s when I came in. Besides that, they taught me everything about coaching high school football. The day-to-day operations, running a defense, running a team. I can’t put into words about what coach (Mark) Freeman and coach (Shawn) DeFoor have done for me as a coach and a man.”

Ganus will take over for Adam Wallace, who went 11-28 in four years.

The last time Moody finished with a record better than 6-4 was in 2004 when John Grass led the team to a 9-4 record and the third round of the playoffs.

Ganus said returning the program to that caliber is the goal.

“They want to be good and make the commitment, which is why I took the job,” he said. “I wasn’t coming over there to be average and win six or seven games and get just to the first round. I’m spoiled. I’ve been to four straight state championships, and I don’t want to stop.”

Part of that commitment to excellence includes plans for a new high school, a new turf field, new fitness and workout areas and much more thanks to a recent ad valorem increase that was passed, which will go directly toward school projects the next few years.

“To be successful, it takes a full buy in from everybody in the community,” Ganus said. “Just knowing what it takes to be great. Having the support of the school board and the school is huge. Having the newest and latest stuff doesn’t hurt. The city is willing to step forward with this new tax and play a part in building a new school for these kids. In St. Clair County, this will be the only new school in the school system. It’s a chance for us to be the face of the county.” 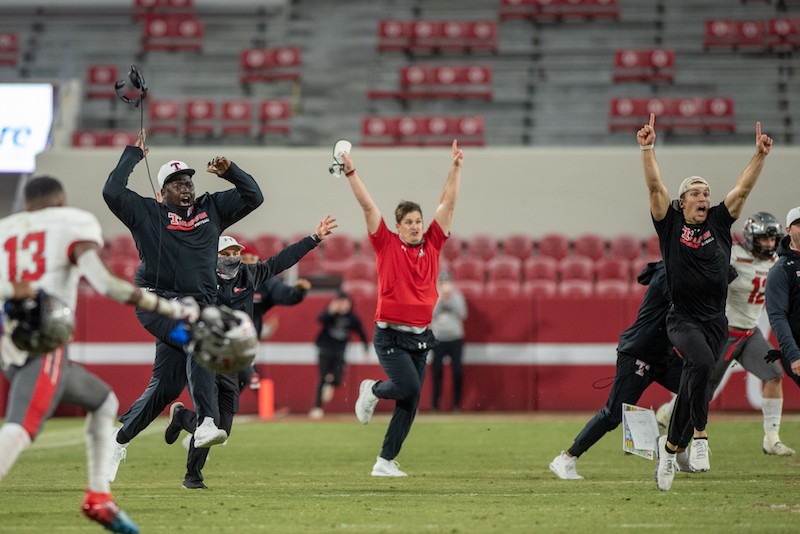 He added that his team and the fan base can expect a lot of energy, enthusiasm and excitement.

“Football is fun. I believe playing football should be fun,” Ganus said. “If you’re not enjoying it, you’re not going to be successful. They need to have fun in practice and every aspect of the game.”

He said that if they do that, then it becomes about belief that they are good enough to compete with anyone that they play, which is all in preparation.

“When you look at a program like Moody, and it’s always around 5-6 wins, you can always pick a few games that were tight, and say, ‘Man, we were a few plays away from being 8-2.’ That’s on me to get them over that hump. You get over that hump by outworking everyone,” Ganus said. “The players just have to believe. You cut on the tape. They’re every bit as talented as others. It’s all about what’s between the ears. Make yourself believe that ‘I am as good. I have worked as hard.’ Then taking that hard work and preparation into Friday night.”

A highly-touted player in high school at Chelsea as well as impressive stints at UAB and the University of Georgia as a star linebacker, Ganus said the key to every level is knowing what is coming on game day.

And that will be one of the most important keys to Moody being successful.

“Games are won before Friday night. They’re won in practice and in film,” he said. “When you get to Friday night, you need to know what they’re about to do and feel good physically and mentally.”

Now, he knows it is up to him to take Moody football to the next level, and it is something he and his family look forward to.

“It was a family decision,” Ganus said. “My wife Peyton, every time an opportunity opened or we would hear about something, she’s always had this gut feeling about when it’s right or not right. There have been times where she said it wasn’t right.”

But when Moody called, it was different. The two knew it was an opportunity they couldn’t turn down.

“We both felt at peace. We went and drove around town. Checked out the school, and it felt right,” he said. “What drew us to it. When we went to Chelsea back in 2010, 2011, this is kind of what it felt like. Athletics is almost the center of the community. It’s nostalgic for us. Just the size of the community. We felt like it was a great place to be. We’re really excited for the opportunity.” 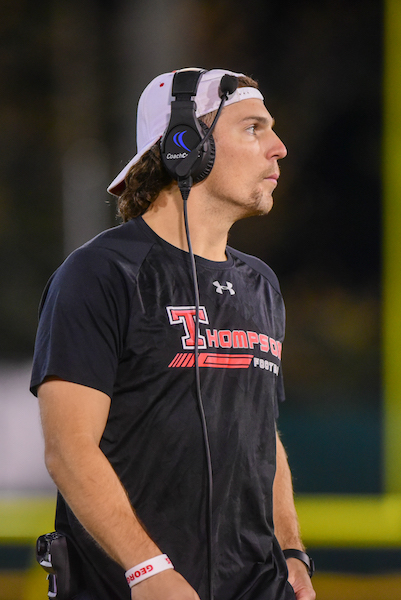 At 27 years old, he knows he has a lot to prove, but he feels prepared to do just that after being around a championship program at one of the most competitive levels of football.

And for that, he said he is forever grateful to Freeman, Thompson and Alabaster City Schools for preparing him for this moment.

“Coach Freeman is big in his faith. We’ve had countless conversations where he has been there for me, at midnight, whenever,” Ganus said. “When I became a father while I was at Thompson, he was there. I owe him and them everything for the chance. Fresh out of the league, and they said, ‘Come on.’ They taught me how to outwork people and do the things it takes to build a program.”

“That’s that mental hump,” Ganus said. “They were good enough to have success, but couldn’t get there. Then, we got those guys to buy in and they started to see the success. It’s all about setting the culture and playing to a standard.”

Ganus also thanked Alabaster City Schools Superintendent Dr. Wayne Vickers, Thompson principal Wesley Hester and the board of education for the opportunity they gave him.

Ganus said high school him would be ecstatic for accomplishing this goal, now it’s time to go to work.

“They’re going to get everything I have,” he said. “I am going to give the kids everything I have, work as a hard as I can and put these kids in a position to win football games. I have worked under the best and played for the best. Now, I have to take my tools with me and figure out what’s going to give me success at Moody. I’ve got a lot of experienced coaches and mentors that will be there for me.”