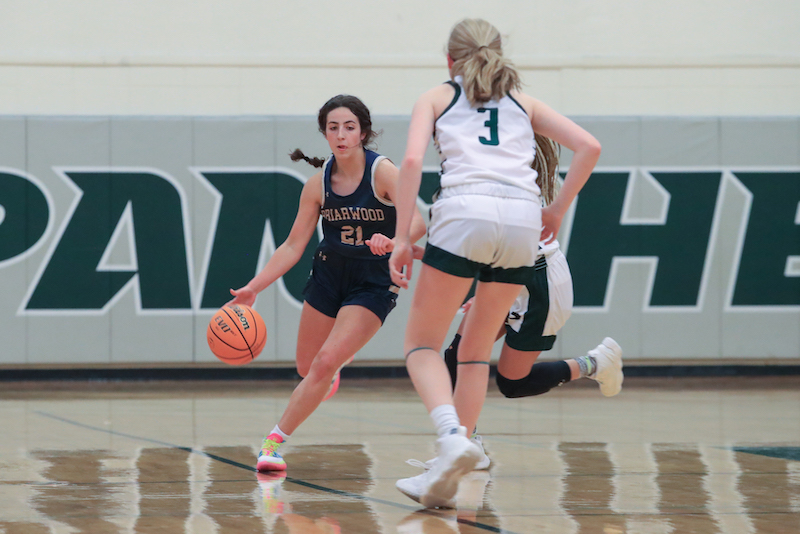 CALERA – The Briarwood Lions turned a close game in the first half into a route Thursday, Dec. 16, using a big run and great defense in the third quarter to pull away for a 54-31 road win against Calera.

“It was a rough first half. I feel like it’s like this every year. It’s exam week and we’re pretty mentally exhausted,” said head coach Lorie Kerley. “We were able to put a nice little run in the third quarter that gave us a little cushion and took the stress off of us and we started to play a little more free. But I’m really proud of them, they worked really hard, didn’t quit and I challenged them at halftime to pick it up and they did, they answered.”

The two teams combined for just 12 points in the first quarter as the defenses took advantage of the early jitters.

Briarwood forced nine turnovers in the period, but despite playing a cleaner, more controlled ballgame still found it difficult to score with Calera’s athleticism and length.

The Eagles gave themselves plenty of opportunities and started to take advantage in the second quarter where they forced nine turnovers from Briarwood and went on a 7-1 run to take a 12-8 lead.

However, that was short lived as Calera went cold and BCS got active on the boards.

The Lions grabbed eight offensive rebounds and the extra opportunities paid off as they went on a 13-4 run to close the half.

“We talked a lot about not letting them enter the ball into the high post, because they were just killing us getting it into the paint so that was one defensive adjustment we made,” Kerley said. “Then, on offense, we just talked about moving the ball around. We took a lot of bad shots in the first half, we weren’t really making them shift on defense, but that wasn’t what got us the lead it was pushing the ball in transition.”

After halftime, Briarwood caught fire from the field and put the game away with a massive 22-2 run.

The Lions’ zone defense clogged the lane neutralizing Calera’s height advantage and from there got in the passing lanes for easy fast break baskets.

The Eagles couldn’t match the firepower and only mustered three baskets in the quarter as they saw a three-point deficit explode into a 43-22 score to end the period.

BCS forced eight more turnovers in the second half to keep the threat contained.

The shooting drought continued into the fourth and despite working their way to the free throw line, Calera couldn’t significantly reduce the disparity in time.

Point guard Mary Beth Dicen led Briarwood in a balanced effort from the Lions. Sigourney Bell, who was feisty in the boards added nine points while Emma Kerley and Kate Sounders chipped in eight points each.

“Mary Beth does a great job of pushing the ball up the floor. She sees the floor well, she really likes to push in transition—sometimes more than I would like for her to,” Kerley said. “I’ve been giving a little more freedom with it so she’s a tough little player.”