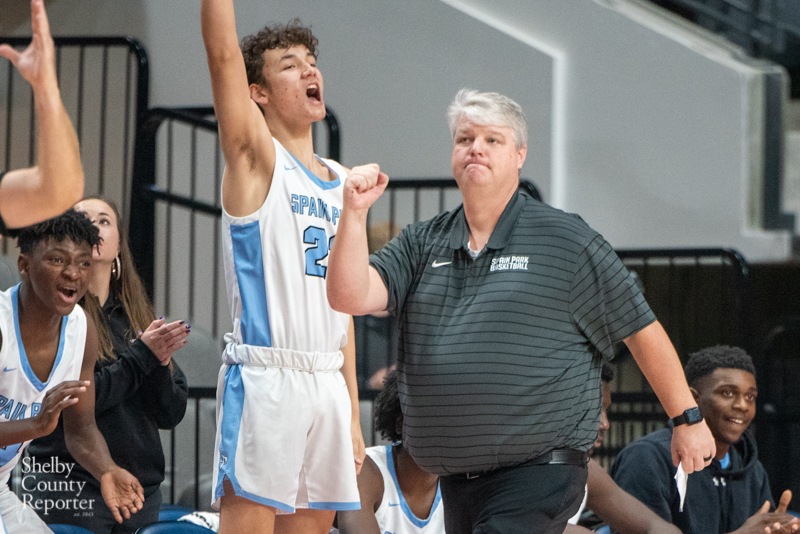 HUEYTOWN – The Spain Park Jaguars turned a defensive start into offensive fireworks on Friday, Dec. 17 to pick up their 10th win of the season in a road battle against Hueytown.

The Class 7A No. 9 Jags fell behind at the end of the first quarter, but the Jags bounced back to take the lead at the half and then poured in 39 points in the second half to pick up a 59-52 win against Class 6A No. 7 Hueytown.

The opening quarter was a back-and-forth battle between the two teams up to a 10-10 tie in the final seconds, but a buzzer-beating 3-pointer from Hueytown’s Corey Stephenson gave the Golden Gophers a 13-10 lead at the end of the opening quarter.

The Jaguars, however, turned to their defense in the second half to help them overtake the lead going into the break.

They outscored the Golden Gophers 10-6 in the quarter to grab a 20-19 advantage at the half.

From there, the game took an offensive turn, as both teams came out firing in the second half.

The first four minutes of the third quarter were similar to the first half with the Jags holding a one-point advantage at 26-25, but a 3-pointer shortly after from Hueytown started the push from both offenses.

Hueytown responded with a 3-pointer to quickly even the score, but the Jags put together another quick spurt with a 6-0 run to end the quarter and take a 39-33 lead into the final quarter thanks to 13 points in the final few minutes of the period.

The Golden Gophers bounced back early in the final quarter with a 6-2 run to draw to within two points, which held strong up to 43-41 with just less than five minutes to play.

Spain Park, however, responded with the final big run of the game, outscoring the Gophers 12-6 over the next two minutes to open up a 55-47 lead.

Hueytown knocked down a big 3-pointer shortly after to draw within five points, but the Jaguars were able to make 11 of their 13 free throws in the final quarter, which became key in the final minutes to preserve the seven-point win.

Colin Turner led the way with 17 points for Spain Park, while Chase James added 12. Sam Wright and Josh Harrington were right behind with nine and eight, respectively.