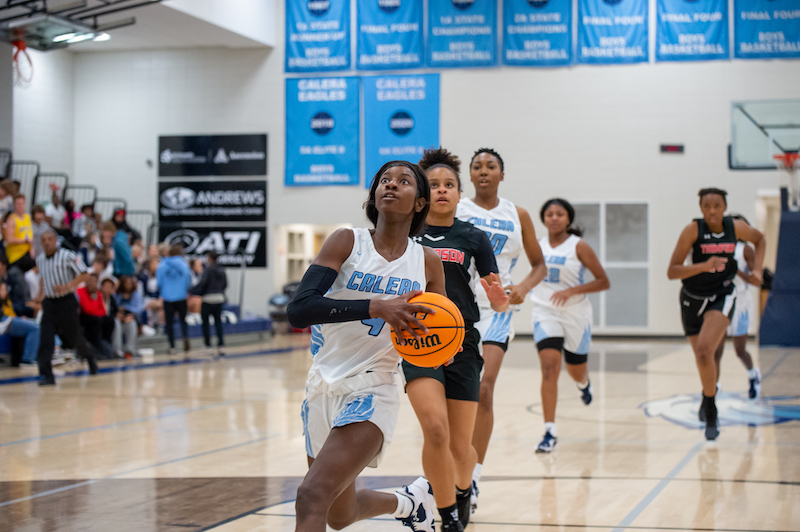 The Eagles used a clutch fourth-quarter comeback behind great defense to grab a thrilling 46-44 win.

Thompson had a nice start to the game, especially Dasia Hyunh, who was white hot from the field. The sophomore hit back-to-back 3-pointers and Alecia Reasor hit her second of two baskets in the first quarter to cap a 15-2 run to begin the game.

However, Calera slowly began to turn the tide from there.

The Eagles peeled off a 9-2 run between the end of the first quarter and the start of the second, and then caught fire for the rest of the half.

Kaylen Moultrie was unstoppable and the Eagles dominated the boards with 13 offensive rebounds in the first two quarters.

Time after time, Calera’s height and length became a factor as the Eagles scored on second opportunities in the paint. Moultrie had 10 points in the first half and assisted on multiple baskets.

Thompson came out strong again in the third quarter scoring the first seven points and held the Eagles scoreless for the first six minutes of the period.

But again, Calera climbed back in the game. Moultrie, held scoreless in the third quarter, took over again when her team needed her the most.

The senior scored nine straight points and 11 in the quarter, but Calera’s defense was needed to win them the game.

After Natalie French tied the game at 50 with a three-point play for Thompson, Nakeia Reasor answered with her second trey of the game to put the Eagles up by three again.

Thompson had chances late in the game with a couple of offensive rebounds near the basket and Calera missing their last four free throws, but the Warriors couldn’t buy a bucket in the end for a heartbreaking loss.