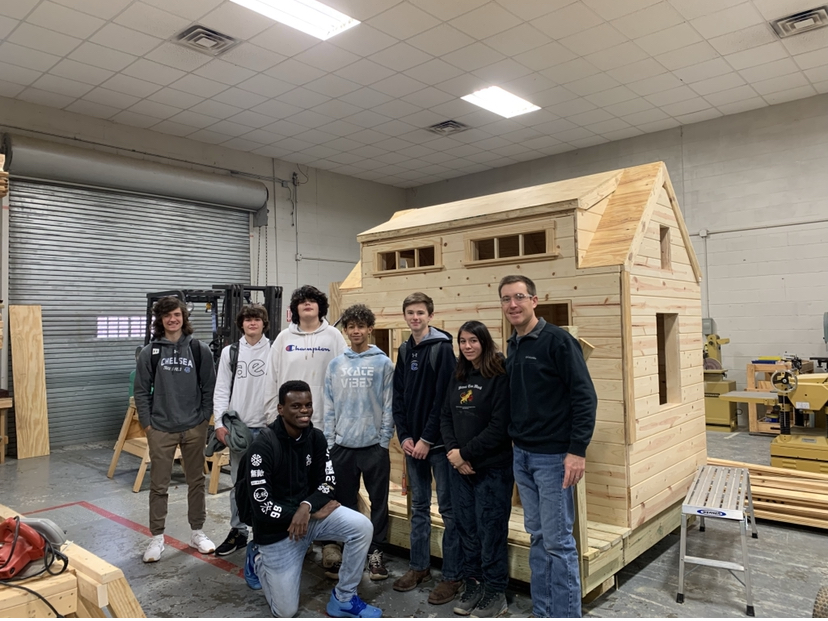 Blake Ray’s carpentry students at CTEC in Columbiana finished out the semester by working on a special project that will ultimately raise funds for Children’s Hospital of Alabama in a raffle to start the new year.

When Ray was looking for resources for his students this past summer, he met Ashley Smith of the Alabama Forestry Association at an FFA competition. Smith coordinates the Sustainable Forestry Initiative for Alabama and was looking for a project to teach youth about resource sustainability.

Through Smith, Ray was introduced to a charity called Log a Load. Log a Load is supported by members of the logging industry like the Forestry Association. Its goal is to raise funds for research at Children’s Hospital of Alabama.

The provision of the lumber itself was a miracle for Ray’s students, as supplies for his program were becoming harder to come by thanks to the rising cost of lumber and supply chain issues. He was happy to take on the project.

In the past, the students have worked on other community projects like the 20 benches they built for the cross country trail in Columbiana. This project, however, gave them an opportunity to work on a larger scale structure that offered lessons that many of them will need when they enter the job market later.

“They learned to measure, frame, use power tools, roof, and do some roughing out and finishing work. They all came a long way in their skills and abilities.” Ray said.

He added that the community service aspect of the project gives them a sense of purpose and motivation beyond just making good grades in the class.

This was confirmed by Chelsea high school junior Palmer Sexton.

“It’s been fun to work together as a team these last few months,” Sexton said. “I learned how to use a circular saw and jigsaw, as well as learn how to plumb and square when framing. It was also good to have the chance to help someone else through this project.”

Ray and his students are giving the playhouse to Log a Load where it will be raffled off to benefit Children’s Hospital of Alabama after the first of the year.

To find out more about what students are up to, check the CTEC Facebook page.