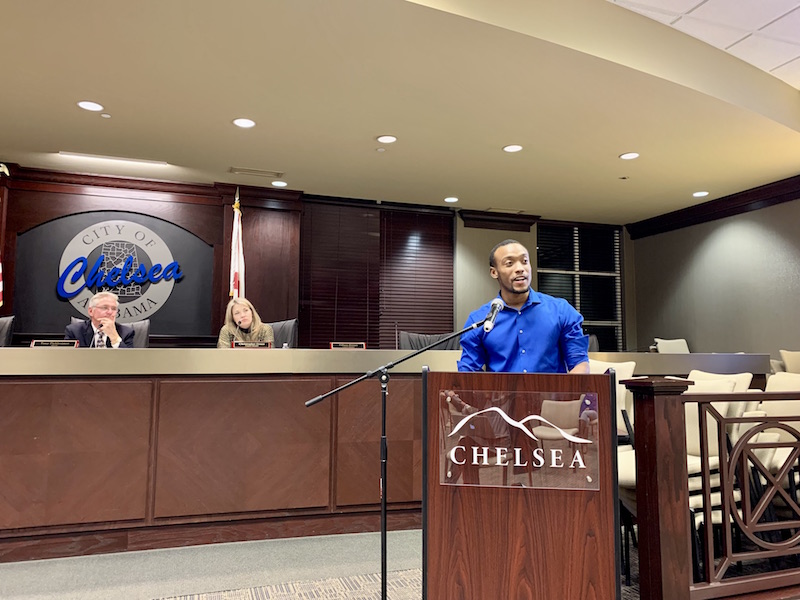 Trey Lee, Chelsea High School’s head coach for track and field and cross country, speaks at the Chelsea City Council meeting on Tuesday, Dec. 21 after the council voted in favor of an agreement for a turf and track project at CHHS. (Reporter Photo/Emily Sparacino)

CHELSEA – Student-athletes at Chelsea High School can look forward to significant upgrades coming to their athletic facilities in the near future.

On Tuesday, Dec. 21, the Chelsea City Council approved a memorandum of agreement with Shelby County and the city of Westover for a turf and competition track project at CHHS.

Preliminary estimates show the project will likely cost between $1.4 million and $1.6 million, he said.

“This project has been in the works for a long time,” Picklesimer said. “Thank you for your efforts to move this forward.”

The council’s decision elicited applause from numerous students and school staff members in the audience.

“I’m a supporter of this because I feel like it’s something that’s very well needed,” Councilmember Tiffany Bittner said, emphasizing the recent news of Chelsea moving up to Class 7A in the reclassification. “This is a step we can make towards getting up to the level of the teams we’re going to be playing against in the fall.”

“I really think this takes us a step in the right direction,” Turner said. “We thank you genuinely for your support.”

Trey Lee, the new head coach of CHHS’s track and field and cross country teams, said he and many others at the school are excited about the long-awaited project.

“In the past six months, the track athletes and the cross country team have continually improved,” Lee said. “We have over 50 personal records and already 20 new school records. This is done without a track.”

Lee said having a track at the school will be a solution to different challenges, such as practice scheduling conflicts, for Chelsea’s student-athletes.

“Having a track of our own will help not just the track kids, but also all the other sports on campus,” Lee said. “Considering that we are moving up to 7A next year, we will be facing even more adversity, and a proper field will help with the athletics for the high school. It will help the athletes represent our city, and most importantly, it will help us be better than just good enough.”

Scroggins said the county would be able to use the facility for tourism-related events when the school is not using it.

“This is really just Phase 1 of getting facilities that are adequate,” he said. “There’s an opportunity to reinvest in your own municipality and to bolster your community outside of just a track and field project.”