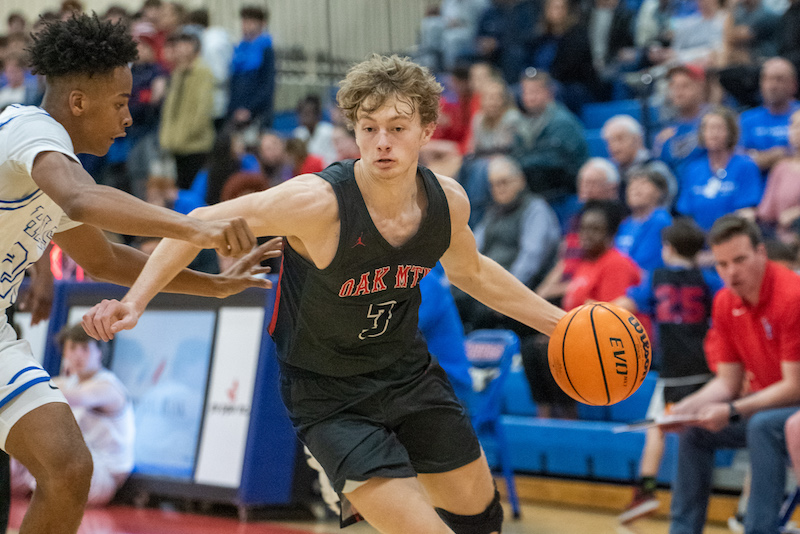 Brady Dunn was big for Oak Mountain during the Battle 205 tournament, helping the Eagles put together a 2-1 record at the event in downtown Birmingham Dec. 20-22. (Reporter photo/Keith McCoy)

With the tournament pitting together teams from around the 205 area code with the metro teams taking on the city teams, the Eagles squared off against Jackson-Olin, Carver-Birmingham and Ramsay during the three-day tournament, winning two and dropping one.

The Eagles picked up wins against Jackson-Olin and Carver-Birmingham, respectively, to start the tournament 2-0, but Class 5A No. 5 Ramsay outlasted Oak Mountain 52-50 in the tournament’s final game.

Against Jackson-Olin to open the tournament, Oak Mountain was able jump out to a 17-6 lead.

After a defensive start to the game that saw the two score a combined 11 points in the opening quarter, the Eagles finally got into a rhythm early in the second quarter thanks to continued success defensively.

Brady Dunn hit a 3-pointer with 3:20 left in the second quarter, which seemed to remove the lid from the rim.

Adjusting to shooting inside the arena’s settings, Oak Mountain got one more basket before Dunn hit another 3-pointer in the final 45 seconds to make it 22-8 near the half.

Jackson-Olin put together a quick run to cut the deficit back to 10 points in the first minute of the second half, but the Eagles put together a lethal stretch from there.

They went on a 17-4 run to open up a 23-point advantage late in the third quarter.

That was just the beginning of a dominant stretch for the Eagles, as they eventually took a 53-26 lead late in the fourth quarter before closing out the 56-32 victory.

Wilder Evers finished with 15 points, while Dunn added 14 in the opening win.

And that was just the start of an impressive two-day stretch for the Eagles.

Now warmed up and adjusted to the setting, the Eagles came out the next day and put together one of their best efforts of the season against Carver-Birmingham.

After falling behind 5-2 early in the game, Evan Smith put together an impressive early stretch to help the Eagles gain 12-9 lead with an and-1.

Carver used a 5-0 run to draw within 12 points, but the Eagles then caught fire from beyond the arc with Dunn hitting two and Ryan Giegel one over the next few possessions to make it 41-20 near the half.

That carried over into the second half, as Dunn hit an early 3-pointer in the third quarter to make it 49-26.

Up by 23, the Eagles had more than enough cushion, eventually extending the advantage to 61-32 late in the third and 77-38 in the fourth quarter on the way to an 81-43 victory.

Looking to close the tournament with a perfect record, the Eagles ran into a scrappy Ramsay team, which led to a hard-fought battle between two of the best teams in their respective classifications.

For the majority of the game, neither team held more than a two-point lead.

Oak Mountain seemed to gain traction at the right time. Trailing 38-37, Giegel and Dunn hit back-to-back 3-pointers to put the Eagles in front 43-40 late in the final quarter.

Ramsay answered with an 8-2 run to storm back in front by three points, but another clutch 3-pointer from Dunn tied the game 48-48.

The Rams, however, finished strong in the final seconds, scoring four in a row to eventually hold on for a thrilling 52-50 win.